I thought letting him go quietly would be too much like letting myself get hustled off a cliff. He could kill me with those shrugs.

Then there was screaming, a lot of it, and I’m not ashamed to admit that at times I wasn’t even yelling words. I thought, If I can keep him talking, he’ll stay.

So I gave him a list of what he’d taken from me, and when that didn’t work, I said I didn’t care what he took, it was really about what I had left to give.

He said, “These things just happen.”

“Not good enough,” I said, clinging on.

Eventually, someone phoned the police.  It wasn’t quite that bad—though it was getting there, and that’s why we called it quits.  No charges, no restraining orders, no, thank you.  Years later, he told me being with me was like being pressed up against glass.  All the want was there, but the warmth wasn’t.

I didn’t tell him hearing his voice made me remember a world that had been cut to fit someone more generous.

Instead I told him about the time I saw a woman at the mall.  She had just met up with her friend.  She picked up the friend’s baby and then she smelled it. She said, “I don’t know why I just did that.”

Then she said, “Whenever I’m folding new laundry, I smell it.”

All of which, to me, means: even if you don’t know why, there’s a reason.

He said he was glad he’d left before we’d really lost it.

I told him you could tell a lot about a person by what she saves.

I woke to tapping on the window, a man’s voice calling my mother’s name, put me on my feet before I knew what was at stake. My little sister was already up in the next room. She peered sideways through the shades and I pulled her away. She was six, thought it was our dad, but I was ten, old enough to know better. Mom had secrets, but I’d figured out most of them. I knew she still hoped Dad would come back, and I knew him well enough to know he wasn’t thinking about us.

In the morning I was supposed to get the class rabbit and bring her home for the weekend, and I’d spent all week telling my sister about it. Rabbits eat the tops of carrots, not the orange part. When they wash their ears they look like women in movies, in nightgowns, brushing their hair to one side, heads tilted. They’re alone at their mirrors, but they’re meant to be looked at.

The tapping went away and continued. The man outside was circling the house. In his head maybe he was lovelorn, romantic. Uncontrollable.

My mother was asleep. My sister, in tears. I felt I was in a dream in which I hated everyone. In the morning everything would be better, and I hated that, too. That would be a feeling I’d hold onto for a while. How suffering was an illusion I’d have over and over, but no one else could see. 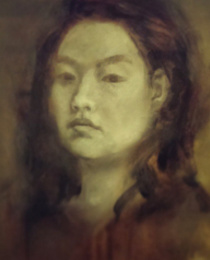 Katherine J. Lee is a writer who unties her hands. She has worked as a legal library filer, textile designer, and gardener. Her fiction has been published in ESOPUS and Storychord, and she has art forthcoming in Cactus Heart. Learn more about Katherine and her work at www.katherinejlee.com.