To make metal is to take the earth apart. The process of taking and refining the materials needed for the manufacturing of electronics, including life-saving ones, often irrevocably disturbs and poisons the nearby land, rivers, animals, and communities. The solvents used to extract the minerals are toxic; endangered species lose their natural habitats; people get sick. In Lightning Flowers, Katherine E. Standefer’s debut memoir, Standefer weaves a narrative of illness and trauma with her research into the ecological and ethical ramifications of the mining and healthcare industry.

In her early 20s, Standefer learns she has inherited a condition called congenital long QT syndrome after she passes out in a parking lot. It’s a syndrome that can unexpectedly cause life-threatening heart irregularities. At the urging of her doctors and family, though with great personal reservation, Standefer has an internal cardiac defibrillator (ICD) implanted in her chest. The device is meant to shock her heart back to normalcy should it register any irregularities. Beyond the accumulated medical bills and bodily toll, Standefer begins to wonder what this device took from the earth, the communities affected by mining culture, and the ecosystem. At the heart of her memoir, she is asking, “Is my life worth the cost of this device?”

In a short but engaging prologue, Standefer shares her memory of receiving three shocks to her heart while playing a pick-up game of soccer:

Like a badly spliced film reel, my memory of the night is fractured: in one instant, a player on the other team had fallen and the game had stopped; he was getting up, brushing his thighs. In the next, my hands became claws. A maul cracked open my chest with a sickening thump, a hot whip tearing through my back. Did somebody kick my spine? And then I knew. And I was screaming.

Offered first is the visual from that moment—Standefer seeing someone else’s body rising after falling. The focus on someone else’s physicality reflects Standefer’s own position on the field. Then, she moves on to use figurative diction to convey the extreme pain in which she found herself. What’s so interesting in this moment is how she actually leaves her body in order to write the body by using words like “claws,” “maul,” “hot whip,” and “tearing.” The images convey violence.

Her word choice and pacing support the structure of the opening paragraph. Her memory is fragmented, and so is the scene. She chooses to remove most details about the physical space, the sounds on the field, even what she was wearing or what the weather was like—elements that, in other scenes, would have been used to give important context. This technique of pacing the writing to reflect a state of mind is one Standefer employs often. She uses these echoes to create urgency and to place her reader in the moment.

After the shocks and screaming subside, Standefer’s teammates help lower her to the ground, supporting her with their hands so she doesn’t fall. Reflecting on that memory of lying on the ground, she offers a single detail: “The smell of burning, which was me.” The absence of the other senses highlights the horror of this moment.

In the final movement of the scene, Standefer’s synapses are sparking connections between what happened in her body and the device that made it happen:

While her body lies on the field, her mind travels, unhindered. The rhythm created by the repetition of the word “if” syntactically pulls the reader in. It’s easy to visualize the children, the tunnels, the warlords, the women, the mountains—the memoir’s through-line has been drawn from Standefer’s life to the land. After reading the two-page prologue, it’s easy to understand the urgency behind Standefer’s questions, and in doing so, she sets the book’s focus for the subsequent 250 pages.

As an integral part of her research, Standefer visits the facilities where ICDs are made and tested, and she travels to the countries and mines from where the elements for her device came. As she does her research, she continually re-centers her body on the page by weaving chapters detailing her personal narrative with chapters about ecological responsibility on a global level.

In the book’s epigraph, Standefer includes an excerpt from Martin Heidegger’s “The Question Concerning Technology.” The excerpt breaks down the four causes: causa materialis, causa formalis, causa finalis, and causa efficiens. Essentially, the four causes stipulate that everything connects—the material used to make an object cannot be separated from what it becomes and how it was fashioned. In a mirrored way, Standefer uses the four causes to structure her narrative on the macro level. Each chapter in her book is delineated as either materialis, formalis, finalis, and efficiens.

If a defibrillator has been designed to tackle the causa finalis of preventing sudden death and the causa formalis of sitting inside the body, directly connected to the heart, with all the impressive technical challenges this entails, … [i]ts design has never taken into account that it is earth, that it comes at a cost to other places and people.

Standefer’s body and the earth are linked through trauma: the earth, through the excavation of its materials, and her body, through the insertion of those materials. At one point during her research, Standefer travels through Wyoming in search of a recently opened gold mine, only to find, instead, land in the process of being reconstructed after uranium mining, which took place in the 1970s. About the attempted reconstruction and new green growth, she writes, “What had grown there looked fake; makeup over a scar that had never healed. The earth was as pockmarked as the moon with our digging.” The scar in the earth is reminiscent of the scar on Standefer’s chest: the pockmarked land, a macrocosm of the puckered skin where her stitches sealed her back together. She talks about the land as injured, scarred, violated—these concepts applied to a non-human entity give it an anthropomorphized nature. Standefer uses this extended analogy to make her body more physical on the page and the land more sensorial.

Part of Standefer’s skill as a writer lies in her ability to return to the parallel between her body’s experiences and that of the land. Though this is a recurring theme, her use of language keeps the imaging from getting stale. In this passage, she internalizes what it’s like for the earth to be struck by lightning while ruminating on those shocks she received on the soccer field:

This was lightning from a clear sky. A dark hand reaching down to touch the heart. I couldn’t stop thinking about what my insides must look like: the shining twists of burned tissue, thickening, flowers of the body cavity. The way that, when lightning hits ground, sand fuses in long fingers that reach deep into the earth.

What’s striking about Standefer’s prose is how often she actually removes herself from her body and connects it to the land. In this removal, though, she strengthens and reinforces her bodily presence on the page. She often uses lyrical language and linked syntax (semi-colons, colons, and hyphens abound; in one stunning, breath-taking line, she writes, “No-food-no-water-in-case-of-surgery-don’t-tangle-the-IV-line-pushing-the-stand-to-the-bathroom-peeing-in-a-plastic-tray dark pain no breath.”) to relay this interconnection between body and land.

After exploring the consequences of mining on the land, local communities, and healthcare industry, Standefer spends time looking into the sustainability of the actual ICDs. This is another major thread throughout her narrative: how does the use and disposal of electronics add to the deterioration of the landscape and atmosphere? She writes that some ICDs are never used because of a defect or are only used for a few days, and even ones that are used for years inevitably find their way to landfills unless they’re collected and repurposed for second life, which is a fairly new practice. Like much of the research in Standefer’s book, the threads of her research could, in other hands, tend to be more esoteric, but Standefer continues to use euphonious, figurative writing to enliven her subject matter:

We speak of throwing things away, but away is a place; a made object exists until destroyed. To know what it took to make a single device and then understand that it might be used only for days created a hot kind of rage in me, something wild and whiplike. I could feel viscerally the accumulation of stripped earth, of shipping containers chugging across oceans, of toxic smelters releasing their plumes, of the air-conditioning and air-filtration bills of clean rooms in Arizona and California.

Standefer internalizes this exterior process because through it, these elements, and this device, and this mining practice, have become a part of her person.

While Standefer’s writing is evidence of her bravery (it takes a certain gutsiness to put your body on the page, its inner workings bared for all to see), her crafting of the chapters, paragraphs, and lines on both a micro- and macro-level is what makes this a remarkable work. This memoir is an example of how effective a braided narrative can be, bringing together multiple strands of life not easily plucked apart and compartmentalized.

Lightning Flowers is sublime in many ways. Standefer writes poetically and concretely of her emotional and physical experiences, while also tackling larger ethical issues. Things like environmental disaster, healthcare access, and trauma can often feel too big, too painful, and too abstract for a single person to digest, but Standefer enfolds them all in the arc of her narrative. In the epilogue, Standefer leaves her reader with ideas and questions about how we can better take care of each other, ourselves, and the earth. There are more questions than there are answers, and that in itself is a gift for those who care to listen. 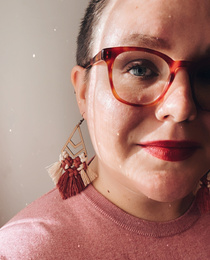 Sarah Battilana is a writer from Cleveland, Ohio. She holds an MFA in creative non-fiction writing from Ashland University and primarily writes memoir, essay, and reviews. Her work appears in Proximity Magazine, Sightlines Journal, and elsewhere.