We spent all day looking for a parking spot in Sopot. “I’ve never seen it like this,” our driver said, which must have been a lie. This was the kind of congestion you’d get in Los Angeles and New York, but not in Poland. Our driver’s English was awkward and unsettling—and why, we wondered, why would he jump immediately to his second (or third or fourth) language? We were not exactly tourists. This was, after all, our home. Why not speak German? Why not Polish?

Officially—according to the Nassau County Medical Examiner—officially, we were both dead. When we boarded the plane in LaGuardia, we had been in caskets. What an incredible idea, our grandchildren must have thought, unearthing the deceased. By the time the correct forms had been filed and our bodies exhumed (to be reburied in our country of origin) we’d been in the ground for a number of years. Opa Kurt since 1954, Omi Nelly since 1976. It was an uncommon procedure, but this was what our posterity wanted (maybe even needed) to do. How—really—how could we refuse?

Yet, here, we were experiencing, incredibly, a second life. Arriving in Sopot (and left to our own devices) we simply opened our eyes, stood up, and walked away, later finding each other at the Grand Hotel, where, long ago, it’s said, we fell in love.

Sopot was supposed to feel like home. But, also, better than home. Here, we had a history, even if it wasn’t on our side. The Grand Hotel, of course, was different than we remembered it to be, lacking the particular luster that had once charmed the likes of Fidel Castro and Marlena Dietrich. So much had changed—between Stalin’s communism and Hitler’s Nazism—since we had last been in Poland. There was little we could do, but revel, like children, in the strangeness of this world we’d reentered—the technological advancements that succeeded our deaths (computers, cellphones, relentless and immediate) and an expanse of Blocs (big, featureless buildings) sulking at the edge of town. This was to be expected. When we’d emigrated in 1939, red Js stamped into our passports, we couldn’t expect (nor would we have wanted) the place to stand still. But, at least, it was familiar, a simulacrum of what it once was, unlike New York, which seemed to redo itself with every passing day.

“Where am I taking you?” asked the driver, a young man, who (out of “pity” for us, ostensibly out-of-place, melting in the sun) had offered to take us around for (“a small price”) the cufflinks on Opa’s wrists, and later (due to the length of the drive) for the chain around Omi’s neck. The farther we drove, the more the driver wanted: Omi’s earrings, bifocals, and heels; Opa’s leather bucks, wool coat, and tie. We shared a look from the backseat, slipping off our wedding bands, knowing we were being fleeced. But what, ultimately, could we do with all this junk? There was a good chance, anyway, that it could all vanish at any moment.

Omi Nelly, attempting a response, sputtered like a pipe that hadn’t seen water in years. Language had long since failed her, had failed us both. English, no matter how much we spoke, felt blubbery and unfamiliar; German, blemished and painful. Despite wanting to be grandiloquent with the driver, we resorted instead to the numerous faces we’d developed during our tenure in Manhattan: baring our teeth, showing a grin, and performing the necessary gymnastics to squeeze our lips into a pout.

At the same time, Opa, who had formerly been a doctor, was miming over Omi, trying to ask, Are ve ghosts? Angels? If not experienced in the transmigration of souls and other ethereal processes, he was wary of the possibilities. But we weren’t ghosts—or were we? Blood (or something resembling blood) rushed through our veins—we felt it—flushed out our cheeks, which for years had been wrought with wrinkles. And we’d shaken the driver’s hand—hadn’t we?—felt his skin, his car’s A/C still panting on our necks, touched each other, gently, as we rediscovered each other’s body, piecing together the fifty-odd years we’d been apart.

We could go anywhere, could do anything. Kurt, with a deep, waxy scar across his face, from the corner of his mouth to his left ear, thought we might visit his office—or what used to be his office, his “practice”—the last place he remembered feeling like himself. Nelly, without her glasses, all of Sopot in a haze, thought we’d visit the flat in which we once lived. Designed by Carl Kupperschmitt, the self-taught architect, Sopot’s Gaudí—it was the one we’d fled, deserted before the maid could come to clean, to scrub away the marks we’d left in the course of making it our own. And there, there it was, materializing as the car swung around the block, in the periphery of her vision, this place where we’d become a family, where she’d given birth to her only son. Nelly threw her fingers at the building, as if to say, Stop, here, stop the car, and yet it was already a block, then three, then ten, away.

We might, we thought, might, for the fun of it, go to the beach. Fan out towels across the sand, tan our paper-white skin. We came from a family of first-rate swimmers, first-rate beach-goers. Watch the Poles, walking by in tiny bikinis and tight shorts, sexy in the way Atlantic City is sexy, their bodies white and slick, not even noticing us, Omi and Opa, an intractable pair, tempted by the surf.

This kinda view, Kurt might have said, slowly rotating his neck to follow a particularly handsome bather, you don’t get every day.

You’re such a schmuck, Nelly would have laughed, chortled, her regular response, soaking in every last ounce of the living, the willowing sun.

We might, we imagined from the backseat, get haircuts—or buzzcuts—or trims—shear off our thin, white mops, with the possibility of them growing back thick, long, and pigmented. We felt younger, empty of the causes of our deaths—which were more like dream than memory, the details rounded and fragmentary. Might go back to the caskets we abandoned, freshly trimmed, waiting quietly (suppressing giggles) for the right moment—when the mortician came around—to jump out, giving him a heart-wrenching scare.

We looked at one another, perhaps wishing we’d never left those coffins, never stepped into this car.

We could, too, find food, feeling a desperate hunger, the sort we’d heard about—in hushed, embarrassed tones—from our friends who had been imprisoned. How, these friends had whispered, they’d been able to see their hearts palpitating like insects beneath their skin. Omi’s parents, Dorothea and Zvi, had wanted to stay, but she was never told where or if they’d died. We could already taste the pierogis, the fresh bread, the beet soup, the rich, heavy beer—each a memory on our tongues.

We studied the faces of the passersby, as the driver, who we had taken to calling “the devil” (part ironically and part in earnest) slowed for traffic, the direct result of a propaganda-driven surge in intranational tourism, and we pointed out the pedestrians who resembled our long-lost friends (and the children and grandchildren and great-grandchildren of these friends) to one another. “Doesn’t that look like…?” But it couldn’t be. Such friends, we were sure, had been lost for good, had neither children nor grandchildren—or if they did, had taught them never to return to Poland.

And we might, we thought, call our own progeny. Finding the right numbers out of dumb luck, out of trying every possible combination. Descendants in other places, like California and Boston and Australia. Ask them: What is happening to us? Teach the little shitheads a thing or two about unsettling the past—and—and tell them, with the sort of compassion and sincerity that we had once avoided: “We know how you feel just now, but, trust us, things will get better.”

We realized, after a while, we could probably do anything. Could take the drugs we’d been warned about: LSD, Mary Jane, Auntie Emma. Could chain-smoke cigarettes, turn our fingernails a tobacco yellow, sweet and unforgiving.

Opa could conduct a surgery at the sanatorium. For old time’s sake. Digging into a body—any would do—with his sturdy tools. Omi could too—and don’t say otherwise—always having wanted to try her hand at his sport, pounding the shiny metal knives like drumsticks into skin. And she might discover a piano, one by the pier that stretches into the Baltic, play Beethoven for the crowds of attractive tourists, Opa dancing, spinning, to its movements.

We might, we thought, fall in love—once again. In New York, before our deaths, we had been a marriage falling apart. Everyone’s had. But, here, anything was possible, we could be anything. We thought this even after we’d been driving around for hours. Even after Omi nodded, We’re going in vucking circles, wondering if our devil-driver realized we were Jews. There, she saw it, was our old flat, passing on the right, again, a three-minute walk from Opa’s office, ten minutes from the train station, the Baltic always nearby, always in sight. The stairs crawling upward, past each floor, past what was once our floor, our kitchen, our mailbox, upward to a skylight in the building’s ceiling, drawing in the light. I know, Opa nodded back, I know.

If we couldn’t find a place to park, we thought, we might as well drive around for eternity, in wider and wider arcs, meeting the surrounding villages and towns, hoping we might catch a glimpse of Dorothea or Zvi, Jakob or Ruth, watching the world change around us. Visit our particular spots, the home, the office, tennis courts, the beach, again, again, again. Our faces pressed against the car’s tinted windows. This couldn’t be worse than the deaths we’d previously been afforded. Couldn’t be worse than being in the ground, decomposing back into the earth. Couldn’t it? Couldn’t it? We’d drive around, perhaps waiting for our son, buried somewhere in Amsterdam, and, in time, our grandchildren and great-grandchildren, too, to join us.

Though, eventually, realizing the permanency of our posterity’s deaths, the futility of our dreams, we would have to get out, our devil-driver pulling to the side of the road, illegally, double-parking. There was nothing left for us to do, nothing left for us—slowly turning sallow and gray in the August sun—to imagine. We would walk into the Baltic, as we were meant to do, years ago, disappearing in its hypnotic waves as if we’d never been here in the first place. 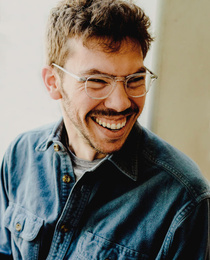 Dylan Fisher's first book, The Loneliest Band in France, received Texas Review Press' Clay Reynolds Novella Prize, a Coups de Cœur from The American Library in Paris, and the Colorado Book Award in Literary Fiction. Dylan holds an MFA in Creative Writing from the University of Nevada, Las Vegas and is pursuing a PhD in Creative Writing at Georgia State University in Atlanta.