from Fragments and Farewell Songs

A field of emptiness. An anthropological pottery is shattered, impossible to return to its early roundness. The sorrow of wills passes on to the next generation.

Crushed by memory, you survive, heart heavy. Fog rises, fog in red, fog on the sea. Like the title deed of a landless owner is the passport, which you now clutch in vain. The suitcase is your canoe, creaking through the crowd. Sweat on the forehead. Taste of salt around mouth corners. Black shrubs blossom on barbed wires. You are the lucky one, who recognizes one of the flowers. The suspicious light of borders flashes on your face. An enmity. When the hand retreats from the small opening of a window, the systematic burn of the stamp scars on the skin. Are you ready to leave, you the prisoner? A few brittle reams of manuscripts, the will of cloud adrift, the amulet of the family.

The retreating autumn deepens in the city. Water turns from silver to maroon. A fisherman smokes on the bank, looking at the rising tide. The dark tones in the landscape are often overlooked. The bank, grey in the fog. The early-lit lamps drag the hidden adventures ahead of their time. In the eyes of a lonesome stranger, the tango outside the cemetery swings to a skeletal dance of death. The puppeteer wears flashy clothes of a clown: happiness is his red nose and innocence, his poverty. Fog crosses the bridge, like a crouching cat. A pedestrian stops to wipe his glasses, as if he wants to wipe out his sudden guilt for things long past. You have not changed, except your ways of looking—that the eyes are still stubbornly in love with the world.

Stars and mother tongues, cold auras
fly low in the blood of a stranger.
Like ancient walkers who go for the mountains
and believe in the magic exorcism of amulets, you believe
that the gentian of the roots of words have not died.
On the hard surface of things,
an immortal longing takes place—hidden in famous mountains,
or sinking in deep wells, oracles as well as bamboo and silk scripts
reveal themselves again, with time,
clay and scratches on the body.
The spirit of the tweezers becomes more and more slender.
Dust blown away. This is the first Heavenly Question:
did the writer of I Ching have worldly worries?
The master counted the yarrows and applied them
on the wounds. Thus thousands of years are gone.
Words break on the brittle
baked tongue, as if rivers
converge and come together before the arrival
of a vast stillness that lies under forgotten scums of slag.
Wherever you are, the pale fire of mother tongues
lights through sleep and is with you,
as you get close to an iceberg in the tundra.
When the south-pointing chariot turns, Cangjie flies over.

Note: Cangjie is claimed to be the inventor of Chinese characters.

The ninety-year-old grandmother sits, elbows on the tablecloth. Outside the window, the sea dims, heavier than lead. Light flees. Massive waves almost press on the roof. Then you think, poetry won’t replace bread, or build an amusement park above a garbage dump. Oil stains can only be wiped out, bit by bit. You go out, toward a fragment of the ancient city wall.

There is always something brimming in the eyes of animals, which reminds one of nostalgia, a language independent of any voice. The river, facedown, a coolness fills my lung. In order to drink, one has to kneel forward. I used to kneel down like this in the mountains of home.

In the reflection a trembling face watches you
and breaks as you dip your hand in the water,
but you feel it, the feeling stronger than ever.
Memory is another kind of rage.

This is a letter from elsewhere,
like graffiti around the corner,
left by an anonymous alien,
now telling an unknown story.
If the urn of memory
is buried in an unknown place,
how will you tell your own story?
“Father, I have been waiting for your return,
I have been standing on the mountain of our early years,
waiting for you.” Like always,
an emptiness hits the spine after a closure.
To take fire out of snow, to walk without a trace,
that is difficult, let alone a life laid down in sacrifice.

Dong Li is an English-language poet and translates from the Chinese, English and German. He’s the recipient of a PEN/Heim Translation Grant and fellowships from Alexander von Humboldt Foundation, Akademie Schloss Solitude, Yaddo and elsewhere. His full-length translation of the Chinese poet Zhu Zhu, The Wild Great Wall, was recently published by Phoneme Media. 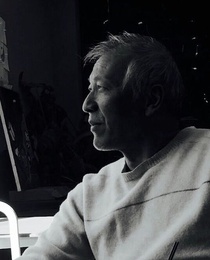 Song Lin is one of the most distinguished and unusual poets from P.R. China. Among his honors are Rotterdam, Romanian, and Hong Kong Poetry Night international poetry fellowships, as well as the Shanghai Literature Prize. He has held residencies at OMI Ledig House translation lab and Vermont Studio Center. Photo by Hu Shao'an.