When Maeve was a young girl, maybe nine or ten, she was walking home from school one afternoon, taking the long way, when a car pulled up next to her. She didn’t recognize the car. It was the color of blood. Dried blood, old blood, this was her thought. She had been watching horror movies against her mother’s wishes, so everything was blood these days: Kool-Aid, ketchup, lipstick, blood itself. When she got a paper cut, that speck seemed newly foreboding—she’d lick it off, heart accelerating, as if to let it pool for even a moment would invite some deviously patient menace. On Saturday nights, when her mother thought she was asleep, she liked to slip downstairs to the rec room and cuddle with her teenage brother, Deacon. They’d nestle under the afghan, her dead grandmother’s afghan, while on TV ax murderers slayed impossibly beautiful or downright ugly girls. Those were the categories of girl. No one looked just normal. No one looked like Maeve, which was a relief.

It had been during this period that the blood-colored car pulled up to her. The man in the car rolled down the window. His hair was gray and buzzed close. She perceived the suggestion of a smirk in his smile.

“How you doing, sweetie? You want a ride?”

She said no, thanks anyway, kept her head down, kept walking.

Her heart raced; she walked faster. He rolled along next to her. Sweat stuck her shirt to her back. The sky was glossy white, pink at the edges, and the road glossy black. A warm, damp wind, the faintest salt in the air: it was going to rain.

She stopped walking. The car stopped rolling. She looked. But she did not recognize this man. Uncle Cedric? She hadn't seen that particular uncle in a couple years—still, she’d recognize him, wouldn’t she? This was not her Uncle Cedric.

The strength of her voice startled her.

She said it again— “you’re not”—and now the strength was gone.

He laughed. “I am. I’m Molly’s brother. I’m the guy who put a rattle in your cradle when you were born. That silver rattle? I bought it. From Tiffany’s?”

“Well, not Tiffany’s. A good knock-off.”

The fact that this stranger spoke her mother’s name, that he said “Molly” and “rattle”—the intimacy of these words made her take off into the woods. She raced toward the old quarry where she knew the other children would be playing Break Your Neck.

She never mentioned this incident to anyone. Later, maybe half a year later, her real Uncle Cedric visited. The real Uncle Cedric looked the same, pretty much exactly, but she knew—she couldn’t explain how but she knew—this time he was the real uncle. His hair was longer now. Same smile, but no smirk. He didn’t mention the day when “Uncle Cedric” tried to pick her up, which proved her theory: he wasn’t the same man. He just wasn’t. They had the same body but were not the same person. She knew it with an irrational, invincible, total certainty. The spirit is mutable. A person can change form. She loved this form. He was affable, winking, brought her a painted coconut shell from a recent trip to Hawaii, and he never mentioned any rattle. The car he drove now was a gold sedan with a bumper sticker for a failed political candidate.

“Sweetie, do I get a hug?” her uncle had asked, and since he was her uncle of course she hugged him, hard, feeling the muscles in his back, the intensity of the hug a further reproach of the wrong Cedric.

It never happened again. As an adult, she’d think of the incident as an anomaly—a rare disruption. It was the horror movies; they were at fault. Those vampires and werewolves and zombies, the goopy, bloody, transmutating guys. Though to be honest the almost-humans      were worse. Handsome faces graphed with scars, eyes of pure white. Or the ordinary doctor who opened his white coat to reveal a mouth on his chest, wet and red as jelly.

The movies ended soon enough. One night her mother heard Maeve scream and rushed down with a knife, prepared to meet an intruder. She forbade Maeve from watching ever again and punished Deacon by unplugging the TV for three weeks. Maeve and Deacon agreed: brandishing that knife, her face slick with Vaseline, their mother looked more terrifying any movie villain they’d seen to date. Their mother didn’t trust her son to keep the TV unplugged, so she locked the antennae in the safe with their birth certificates, her wedding ring, and the necklace from her father before he took off with a dental hygienist called Lucinda. 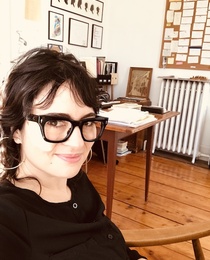 Sarah Braunstein’s short fiction has appeared most recently in The New Yorker, Playboy, and The Harvard Review. She is the author of a novel, The Sweet Relief of Missing Children (W.W. Norton), winner of the Maine Book Award and a finalist for the Flaherty-Dunnan First Novel Prize from the Center for Fiction. She lives in Portland, Maine and teaches at Colby College.