I waited in the nighttime foyer of a cabin in a remote part of the woods, with a person who was supposed to be my dead best friend. At the same time, it didn’t quite seem like her. But how could I say for sure? If I looked at her directly, she’d disappear.

In life, she had been hazy: her image wavered and did not resolve. Now, it was somehow the opposite. Through my peripheral vision, she’d taken on new boundaries, a strange solidity.

We stood in the dark hallway between a ripped screen door and the rest of the cabin. My dead best friend towered over me. She had always been tall. She was even taller now, draped in a heavy cloth, a robe that hung suspiciously.

I had a sudden fear that she was just a head, nothing beneath the fabric but a wooden frame. Old, windswept, splintery boards. I shrank from the thought of the rotting beams I might find inside, propping her up.

As she bent to whisper in my ear, her robe gaped open.

Inside, under the cloth, I saw that she was a cupboard.

If a cupboard were alone in a forest, or at the edge of a bridge, or hurtling itself from this bridge through the air, drifting deep underwater, swollen and broken, it could be something else entirely.

If you did not know it used to be a cupboard, it could be something else entirely.

But this is what you have always known it to be. And because you are here, witnessing it, you make it so.

You dance around, moving your arms. You are trying to set a good example. You show it all off to the cupboard—your delicate internal workings. You perform the joy you believe the cupboard could feel if only it were more honest with itself.

The cupboard clacks with delight. It shuffles over, wooden feet carving marks on the floor. But then it catches you looking. You were imagining your way inside: the shelves, the hinges, the elegant drawers. It backs away. It seals itself so tight splinters burst from its seams.

You try to make your mind blank.

But when you look back with no projections, no expectations, with what you believe to be complete surrender, your mind says, mutely, miserably

I was afraid but soothed. At last, she was displaying her true nature. She was made of olive wood. Holy water in basins. Her face from the side was clear and serene. We stood in the hallway. My dead best friend raised her voice so the inhabitants of the cabin could hear.

Three men sat, slumped, on a threadbare couch. The middle one wore a plaid shirt, buttons straining. His face lit up as she spoke. Still: his stomach pushed gloomily against the cloth. He was a type, just like the others. Years out of college, their lives always referring back to it. Suckling sports beverages from mascot-adorned bottles. Muscles gone slack—but not fat, not yet fat.

My dead best friend spoke with authority. I didn’t listen to the words. I was a little bit drunk on her presence. I closed my eyes, humming to myself. I trusted her, absolutely. Her new solidity as a cupboard gave me the feeling of being in a church. Churches had been beautiful to me, always, in their unfamiliarity. They were not a part of my own childhood.

It’s not that you have to have sex with the men, she said. I stopped humming and stared. But as soon as I looked at her, she became less distinct.

Sex or not sex? Couldn’t she and I just stand together in the hallway, not looking at each other? The gentle breeze, the raspy screen door.

You do have to go in, said my dead best friend.

She would lead me there.

I would enter the main room, dark and cluttered with things. I’d interface with the objects I found. Pick up a heavy stapler, open it. Insert it into myself, spreading my body wide open. That is the deal she’d made.

But I would not have to pretend to like it.

In fact, I was not supposed to like it.

The last thing this was supposed to be was sexual.

The men sat on their couch, staring hollowly out at us. Not excited, not perverse. Only resigned.

She’d walk with me, said my dead best friend. Of course she would.

We moved evenly, side by side. My shoulder scraped against the shingled wall. The woods stretched back into the inky night. I wanted my dead best friend to hold my hand—but when I turned to look at her, she was nowhere.

My hand sweated, empty, at my side. I was not the one these men wanted, but I was all they’d get.

A rotary telephone sat on a desk as I went in. Next to it, a sewing machine. A splintery table, stacks of papers. The man in the plaid shirt smiled desperately. He was a provider, his face insisted. Beneficent, humane, his stumpy hands washed clean.

I wondered about the state of my body under my clothes. I hadn’t looked at myself in a very long time. I thought about all the different things women do with their pubic hair, and what it means. To them, to the watching other.

I unzipped my pants, picked up the stapler. I imagined the women who knew these men. They’d come in and see what I was about to do. They’d catalog my flaws, say terrible things about me. They would think it was all my idea—putting on a joyless, unhinged show, the men watching silently from the couch. 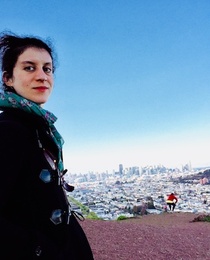 Alyssa Proujansky has studied fiction in Ithaca, London and New York. She was recently a runner-up in contests held by Atticus Review and Psychopomp Magazine, and a finalist in Third Coast’s 2018 Fiction Contest. Her work appears or is forthcoming in Passages North, Third Coast, Columbia Journal, Moon City Review, Atticus Review, Hobart, Psychopomp, Fanzine, Lunch Ticket and elsewhere. She is a member of the PEN Prison Writing Project’s poetry committee.