we are alone in his dark kitchen, pine paneling and avocado walls like a hipster cabin in the Catskills only this is Queens, 1979, and he is Little Lord Fauntleroy in his polyester red shorts and white Peter Pan collared shirt, and I am Storybook Princess in my flowered dress with a white pinafore overlay, Mother Goose embroidered patch sewn on the pocket;

his mother, Eileen, naps upstairs, bedroom door closed--she is recently divorced and exhausted by her three sons (fighting over Legos, Stars Wars figures, and just yesterday, Kenny, the oldest, threw a hammer at Brian, the middle, and knocked out his tooth)—so she said, before walking upstairs, her fingers pressed to her temples, jaw clenched as if biting down on a stick to anesthetize the pain of so many “goddamned bastards” (what she shouts at her sons when they are fighting on the front lawn)--“No noise and play nice,”;

and because I usually listen to adults, or at least adults not my parents (I disobey them all the time--spitting my half-chewed Beef Rouladen into a napkin then flushing it down the toilet; shoving my younger sister in the closet because she is good and sweet and never gets into any trouble; and, secretly, thumbing through my father’s Playboys in the attic, never told not to because my parents never imagine I will, but I know it’s wrong and so wrong, I never confess to the priest how looking at photos of so many women (breasts, nipples, triangles of hair) beneath my mother’s silver fox fur coat, pulled over me like a pelt, makes me warm and throb between my legs)—

because I usually listen to adults this happens: Danny and I sit in front of the television that is on the kitchen table, watching King Kong, the original black and white, eating through a box of Ring Dings, chocolate and cream smeared on our fingers and lips; Fay Wrey is standing on a rickety bamboo platform in the jungle, her arms and legs tied to posts, a sacrifice by the natives to Kong (the hardcore BDSM world might call this an improvised St. John’s Cross); she is screaming and my heart is thumping and Kong is approaching in all his wild eyed ferocity and suddenly I am warm and throbbing between my legs;

when the movie ends, Danny says, “Let’s play King Kong,” and I say “Yes,” though I’m not sure what I’m “yessing”—abduction or rescue or the warm, throbby feeling—and we go down to the dark basement;

“Turn on a light,” I say, there’s mildew and spiders and roly-polies and his father’s work bench against the wall with its shadow tools--hammer, saw, wrenches and pliers;

he tugs a cord, and a bare bulb lights us up like a spotlight, and he says, “Stand still and put your arms out and your legs, too, and no screaming”;

he pretend ties my wrists and ankles to pretend posts, then runs around me on all fours, miming gorilla, grunting and snuffling and oh oh ah ahing, and still I hold still, try not to laugh even though I’m also afraid, but only a little, because after all, it’s Danny in his red shorts and silly white shirt, but wondering, too, when he will tear me from my bonds and drag me up the Empire State Building--the staircase, what else would we climb—waiting with my arms stretched above my head and my legs open and my heart thumping and warm and throbbing between my legs;

Danny jumps up, beating his chest, his mouth a wide angry smile, and punches me in the stomach, a hard fist to my soft middle, and I don’t make a noise, not one sound, but you knew that, right? 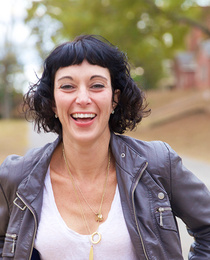 Kerry Neville was raised on Long Island, New York, received her PhD in Creative Writing and Literature from the University of Houston, and now lives in Georgia where she is an Assistant Professor of Creative Writing at Georgia College and State University. She is the author of two short story collections, Necessary Lies, which received the G.S. Sharat Chandra Prize in Fiction and was named a ForeWord Magazine Short Story Book of the Year, and recently, Remember to Forget Me. Her work has appeared in various journals, including The Gettysburg Review, Epoch, and Triquarterly, and online in publications such as The Washington Post, The Huffington Post, and The Fix. She has twice been the recipient of the Dallas Museum of Art's "Arts and Letters Prize for Fiction," and has also been awarded the Texas Institute of Letters Kay Cattarulla Prize for the Short Story and the John Guyon Literary Nonfiction Prize from Crab Orchard Review. Her essays and short stories have been named Notables in Best American Essays and Best American Short Stories.