And the hot thing for spring is orgasm. Everybody’s coming like crazy. The photographers, designers, celebrity guests. People are falling over! They lose their balance and drop like wet laundry. It starts when the first model flounces down the runway: the music throbs and people squirm in their seats, cross their legs, cough. For the first fifteen minutes, the crowd just tries to maintain its composure. It’s a heroic attempt at dignity and decorum. Then all hell breaks loose. Moaning and screaming. Yelping and barking.

Naturally, this is all people are talking about.

Other trends seem trivial in comparison. They are almost entirely ignored. For example, sherbet colors are hot this spring, and ruffles, ballerina necklines, double-breasted cardigans, and also trapeze tops, sarong skirts, rolled pants, that picnic-in-the-country-with-friends-on-the-weekend look, and pleats, and argyle, and also yellow.

But the headlines are all orgasm.

Some say the move is an inspired choice. It was a difficult winter, after all. A sad season of russet and dungaree, stiff shirts, sack dresses, burlap and crinoline. It was just plain awful. So the designers are returning to the fundamental things—instinct, nature, the biologic essentials.

The critics are, as one would predict, suspicious. Easy and trite, they say. Obvious pandering. A bad winter, they say, is no reason to turn to such conspicuous crowd pleasers.

Among the guests, the reaction is mixed. Some emerge giggling and happy. Others weep. Others are overcome with guilt and remorse. It appears to be a strain on certain marriages. The guests say they generally like the orgasms, but maybe not the repercussions: soggy pants; willy-nilly projections of human fluid; and the very serious snafus. Like the ambassador from China, for example, on a human rights junket about fair labor and sweatshops. He saw a gray blazer and ejaculated eight feet into the air. It was a diplomatic nightmare. He was on a plane the next day.

And the whole thing might unravel because of the boycott. The models are rebelling. They’re tired of falling down. Dozens have twisted ankles, bruised knees. They are in danger. They cannot make it to the end of the runway. Every flashbulb is a finger flicking their erogenoplaces. They crumple. It has started to make them angry.

By the end of the week, it seems that orgasms aren't good enough anymore. The public is demanding some substance. The orgasms were nice, they say, but what do they mean? The newspapers demand an explanation, a way to make sense of the trend, to see the orgasms as a response to…what? The religious right, some say. Global climate change, say others. Nobody knows for sure, but theories abound.

Meanwhile, the designers are looking to their summer lines. They promise better things for the future. They say the next collection will be more beautiful than anyone can imagine. They tell us to expect great things. Something new and different. Maybe ball gowns. Or goddess dresses. Maybe green. 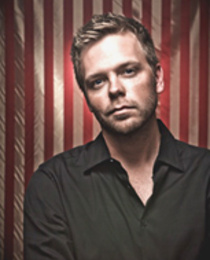 Nathan Hill's short stories have appeared in The Iowa Review, Fiction, AGNI, The Denver Quarterly, The Gettysburg Review, and several other journals. He teaches writing at the University of St. Thomas in Saint Paul, Minnesota. Find him online at nathanhill.net.