She’s there on one of those red-herring March afternoons that make you think spring’s arrived, when everyone pours outdoors gasping, like they’re emerging from underwater. Her parents’ house is the worst on the block, squat and ranch-style, and she’s on a sunny ledge, a small plane on her roof that’s eye-level out your window, where you’re sitting in the stuffy green chair trying to read a Lincoln biography. You keep getting stuck on the bit about his stepmother. Apparently, everyone agrees they had a perfect relationship. So why does that get a whole chapter?

All to say: it’s not like you can help seeing her. Her gaze hasn’t wavered from her own yellowed paperback for minutes. On her back, knees up, she’s in a floppy dress that’s fallen around her pelvis. Cotton underwear, white as teeth, smiles at you. She’s never felt so free, so invisible, as right now, just some plucky girl protagonist and her, the breeze licking her clean legs. Her top half is still child-shaped, but her upper thighs have started thickening.

What is it about thighs that always gets you thinking about breasts? It’s just a bucket of fried chicken, your mind.

You’ve touched but four busts in your life. First, Mom. Then, Darlene: at her father’s card table (later, he’d be the first to serve you whiskey, when you were 15, learning holdem). You were used to being left alone together, normally under a babysitter’s supervision, but you’d outgrown that. You were playing spit. Your hands knocked together once or twice.

“No boy has seen me with my shirt off,” she said while you shuffled.

“You’re sweet,” she said. Like that explained her suddenly bare torso. She was trying on a grown-up smirk, but her eyes were afraid. Stay over there, they said, no matter what her mouth did.

Even though, with the right undergarments, her breasts were straight out of a dirty magazine, Gwynnie hated them. Always asking for backrubs and running baths, where she’d nap and you’d stand in the doorway and watch them float like buoys. The one time they were weightless. They lost shape over the years but always filled your hands like fearsome dough, like they could make one hell of a cake.

And then, doctor’s orders, they were gone. You found her flat in the hospital bed, arms crossed, laughing and crying that she thought she’d get to see them in a jar, like wisdom teeth.

After all that, she still wanted big ones. Made of saline. No complaints from you. You asked, “Can you make the left one bigger again?” and Gwynnie said shut up, she was getting a Bettie Page rack.

But in the end you agreed that they were awful. Perky, hard, and false. Like keeping her womanhood on a ventilator. Useless as the fourth round of chemo. And that, sad sack, was your final set, and some would say it doesn’t even count. There will be no fifth. The notion of you and romance is a fish jumping: slimy, belly-up, oxygen-slashed.

You imagine the prickly hairs on your neighbor’s propped-up knees saluting the sky. The tangled mane that fans out behind her would remind a lesser observer of the sun, but you think of flight. Like the sprawled amber pieces could turn into 30-some-odd wings and propel her, transfigured bird-girl, off into the treetops. She’d like that, you bet. After all, she has climbed up there to be alone, the way teenagers do.

You hear seagulls. All these years, you’ve never heard them at home. You didn’t think they flew this far inland. Seagulls are harbingers of something. When they holler, you catch the ocean. 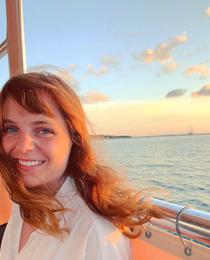 Caroline Wray is a writer from Atlanta. An assistant editor at Penguin Random House, she currently lives in Brooklyn and received her BA from Yale University. This is her first fiction publication.