The Field of Rooms and Halls

A man found a door and hung it on the wall.

I think he thought in rectangles, each day's bright panel pushed one against the next, a calendar of light. He would paint them, all these days, and hang them out of order: an unreliable hotel where no one ever knew which rooms were his, which rooms he had actually been inside of. There were gaps, of course, and some-times overlaps: days too small to fill their slots, days too large for the day to hold them. And days, no matter what their size, that leaked into the next. A leaky day is a dangerous thing. January and her thirty-two rooms.

I put my sadness in a box. The box went soft and wet and weak at the bottom. I called it Thursday. Today is Sunday. The town is empty.

I stood in the road looking forward and back, to see if it would change something. After a while, I went back inside and tripped over the box.

Hard to say, even now, what it was, this extra room. He put his foot in the door of it, kept it open. He painted himself and others appeared. He painted his hunger and suddenly table, the soup fully illustrated in the depth of its bowl. He used the wrong colors to make it right, selecting them for what they felt not what they said, so that everything became a set of relations outside the realm of simple minutes and their named accumulations. Bruising Day, The Mouth of Pears, The Year of Infestations.

Today is Monday. The box is still leaking. Now it is Tuesday.

The walls were strong, the nails reliable. The room grew darker or lighter than it should have been, given the placement of the lamps; the hands of his hands alluding to a secret world beyond the frame he shouldn't have any knowledge of. What's better than a thought? A method. And a hallway appears beacuse you are looking for it.

Each day another panel to lather the paint on, to hide the stone in. Where to place the stone? Inside today, inside tomorrow. Is it the frame that makes it dangerous? There are frames around everything already.

The directors agreed. The crates arrived. They added the pieces to the collection and the whole museum shifted. You have to understand it as it is. Shining blue, shining green. This is also part of the story: how the story changes. This is something I forgot to tell you. 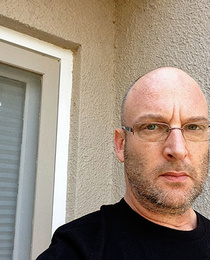 Richard Siken is a poet, painter, filmmaker, as well as an editor at Spork Press. He is a recipient of two Arizona Commission on the Arts grants, two Lannan Residency Fellowships, and a Literature Fellowship in Poetry from the National Endowment for the Arts. His book Crush won the 2004 Yale Series of Younger Poets prize, the Thom Gunn Award, a Lambda Literary Award, and was a finalist for the National Book Critics Circle Award. His most recent book is War of the Foxes (Copper Canyon Press, 2015).