unbroken, I'll drift through the window,
we'll press ourselves together.

Texts explored while writing this piece:

Carrie Lorig's "The Intensity of The Reader: Reading as a Guest / a Thief in the Classroom / in the Wreckage" (VIDA: Women in Literary Arts website, 2015) 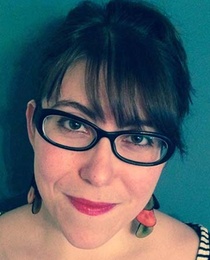 Claudia Cortese’s first full-length book, Wasp Queen, will be published by Black Lawrence Press in 2016. Cortese is also the author of two chapbooks: "Blood Medals" (Thrush Poetry Press, 2015), a collection of prose poems, and The Red Essay and Other Histories (Horse Less Press, 2015), a book of lyric essays. Her work has appeared in Best New Poets 2011, Blackbird, Black Warrior Review, Crazyhorse, Kenyon Review Online, and Sixth Finch, among others. The daughter of Neapolitan immigrants, Cortese grew up in Ohio and lives in New Jersey, where she teaches at Montclair State University.