For Samuel Beckett from Urgency and Patience (Minuit, 2012)

In the early ’80s, I wrote Samuel Beckett a letter. I explained that I was trying to write, adding that he was probably often sought out by strangers, and so rather than asking him to read my work, suggested instead we play a game of correspondence chess with, at stake, a play I’d written. If I won, he’d read it and give me his opinion. If he won, I’d read over my own play at my leisure. I closed my letter with these words: “Just in case, 1. e4.” By return post, Samuel Beckett replied, “Black resigns. Send the play. Sincerely. Samuel Beckett.” I sent him my play, and one or two weeks later, I got another handwritten note: he had kept his word, read my play, and advised me to trim certain passages.

Later—much later, by the scale on which I then perceived time (four years later, let’s say)—I found myself in Jérôme Lindon’s office on the Rue Bernard-Palissy in Paris. My first novel, The Bathroom, had just come out to critical acclaim and our relations were most relaxed and cordial. At the end of our meeting, I rise and offer him my hand to take my leave. “You’re in quite a hurry,” he says. “Sit down, let’s keep chatting a bit.” I sit down, and we keep talking. The conversation flounders a little; I couldn’t quite guess what he had in mind (apparently he was up to something). At exactly three p.m., the phone rings, and Jérôme Lindon hurls himself at his desk to get it (but he always had a precipitous way of picking up the phone, as if it were a matter of grabbing the contraption speedily, before it evaporated), and says, in a calm voice, “I’m coming down.” He hangs up and says, “Come, I’ll introduce you to Beckett.” One behind the other, we go down the dark, steep spiral stairwell at Les Éditions de Minuit and there he is, Samuel Beckett, in the doorway to the first floor. I am extremely intimidated. I don’t know what Lindon was saying to him, I don’t know what I said, I don’t know what Beckett said; in short, I don’t know anything anymore. Some memoirist I am. In my memory—but maybe it’s not even a memory, just vague attempt to reconstruct the scene—we shake hands standing in the doorway, and three things strike me all at once: first off, Beckett’s extremely weak and fragile legs, then the coat he’s wearing that day, which I can still picture now—short, finely dotted with gray wool—and finally, perhaps the most eccentric thing for me (but fairly natural when you think about it, all things considered), when Beckett speaks French, he has an Irish accent.

In the years that follow, I will cross paths with Samuel Beckett again, once or twice, in the offices of the Éditions de Minuit, always in the same place, in the first floor doorway on the Rue Bernard-Palissy (once, my sister is there too). Up till then, I have never sent my books to Beckett (out of modesty, or embarrassment, or shyness, I’m not sure), but with my third book, The Camera, I feel a little more confident, and as it’s been four years already since I’ve been speaking regularly about Beckett with Jérôme Lindon when we have lunch together, since I’ve asked after him without fail, and Lindon has had several occasions to let Beckett know how highly I admire his work, I tell Lindon that I’d like to dedicate my book to Beckett. Finally, and not at all lightly (I must have spent more time thinking about the dedication than writing the book, relatively speaking), I write: “For Samuel Beckett, with my immense esteem, my immense respect, and my immense admiration.” Very good, says Lindon, I’ll bring him the book. Beckett was already in a very weakened state in that month of January 1989, but Jérôme Lindon reported that he was very touched by my dedication. Later, I even found out through Jérôme Lindon, who visited him daily—and this scene requires much modesty to relate, though even more emotion to  imagine—that as Beckett was very weak and bedridden, Jérôme Lindon read the end of The Camera aloud to him one day in his room.

Jérôme Lindon died in April 2001, and one day in 2002, as I was walking around the cemetery in Montparnasse looking for his grave, I chanced upon that of Beckett, who is buried nearby. The weather was beautiful. Gardeners were busy hosing down the gravestones. I came to a halt and, for a long time, stood in the path gazing at the smooth surface of the wet marble of Beckett’s tombstone, shining in the sun.

Original French-language author Jean-Philippe Toussaint is a Belgian writer and filmmaker whose books have been translated into more than twenty languages. The author of nine novels, he is the winner of numerous literary prizes, including the Prix Médicis in 2005 for his novel Running Away, and the Prix Décembre in 2009 for The Truth about Marie, the two middle books of the Marie tetralogy. These essays are taken from the collection Urgency and Patience, forthcoming this spring from Dalkey Archive Press. (Photo credit: Jan H. Myskin)

More of Edward Gauvin's translations of Toussaint can be found in Gulf Coast's Winter/Spring issue 27.1 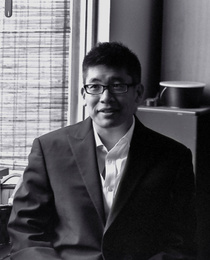 Two-time winner of the John Dryden Translation prize, Edward Gauvin has received fellowships and residencies from PEN America, the NEA, the Fulbright program, the Lannan Foundation, the French Embassy, and Ledig House. His translations include Georges-Olivier Châteaureynaud’s selected stories, A Life on Paper (Small Beer, 2010) winner of the Science Fiction & Fantasy Translation Award, and Jean Ferry's The Conductor and Other Tales (Wakefield, 2013). His work has been nominated for the French-American Foundation Translation Prize, the Oxford-Weidenfeld Translation Prize, and the Best Translated Book Award. Other translations have appeared in The New York Times, Subtropics, Tin House, Conjunctions, and The Southern Review. The translator of more than 150 graphic novels, he is the contributing editor for Francophone comics at Words Without Borders, and a regular columnist on the Francophone fantastic for Weird Fiction Review.