Dad's Crossbow and Other Stories

My dad got a crossbow from Dante, a guy he worked with at the used Honda dealership. Dante’s whole job was to move cars around the lot. Refreshing the inventory, he called it. He was also in charge of the locked metal cabinet filled with keys. A responsibility he was proud of, he told me one night when my brother and I were stuck hanging around the break room while my dad worked late. It was boring back there beneath the flickering cage lights. But we’d been banished from the dealership’s main floor after the manager caught me climbing out of a convertible without opening the door like I’d seen on TV. And from the customer waiting area because of the time my brother and I competed to see who could eat the most complimentary cheese danishes. He threw up, sticky and blond. I kept mine down.

Dante wore the key to the cabinet on a retractable metal wire clipped to his belt loop. My brother called it a grappling hook, though it wasn’t. Dante showed us how it snapped back all on its own, smacking into the area just above and to the left of his crotch with a springy jangle. He offered to let us pull it. My brother wanted to, but I told him no. I was in charge while my dad was working, despite the convertible incident. Dante sold other weapons too: ninja swords, nunchucks, throwing stars. He never said where he got them.

One afternoon of his every-other-Saturdays, my dad took the crossbow gingerly, respectfully from its box on the top shelf of his bedroom closet and led us out onto the apartment’s second-story back porch, a cement slab overlooking the train tracks.

The spring holds over a hundred pounds of pressure, he said, so you use this steel lever to pull it back.

He wouldn’t let us cock it ourselves, but he wanted us to shoot. My brother was seven and I was eleven, but he was braver than me. My dad slid the arrow—he called it a bolt, a fat metal pencil with a cruel, pointed tip—inside the shaft and arranged the bow in my brother’s small arms.

Hold it steady, he said, the trigger is here.

My brother squeezed, the string snapped forward, and the arrow disappeared. They cheered. My dad tried to get me to shoot, too, but I wouldn’t do it. They fired a few more off, trying to hit a tree behind the apartment complex, then scrambled inside and hid behind the door when a lady walking her dog appeared below us. My dad’s crossbow was added to the list of things we shouldn’t tell mom about. Like the Sunday mornings he slept too late and we didn’t make it to Hebrew School. Or the long list of R-rated movies he took us to see—Judge Dredd most recently, which my dad and brother loved but I thought was dumb. Or all the times we had ice cream for dinner and cold, congealed-grease pizza for breakfast and candy until my teeth tingled at the roots from the sweetness. Over the next few weekends, they ran outside every time they heard a rumble, and tried to shoot the train as it passed. I still wouldn’t. Eventually the crossbow stayed in the closet, among forgotten video game consoles, the electronic chess set, and the vests for indoor laser tag.

My dad liked to play a game where he’d take his hands off the steering wheel and let my brother drive. They both thought it was hilarious, but I cowered in the backseat, not seeing what they thought was so funny. There was a spot where he preferred to do it, four streets down from mom’s house, an overgrown strip of yellowed weeds crowned with power lines strung from the neighborhood’s fenced-in transformers. He called it the Devil’s Hopyard, a cursed place where we ought to hold our breath when we walked past on the way to school. For years, we did. When I sat up front, my dad took his hands away from the wheel, and I shrank against the door, whining that I didn’t want to. Eventually he started removing his hands and dramatically closing his eyes, so I was forced to grab the grubby wheel.

During warm weather we took walks around the town reservoir. My dad told us his versions of what I’d learn later were Stephen King stories in an array of spooky voices he’d cultivated doing community theatre, back when he still lived at home. He gave us cap guns that shot loud cracks and little puffs of smoke smelling of the Fourth of July, of sparklers writing our names briefly golden over the night’s dark face. We fired when the bad guys and monsters came into the story. Cap guns were illegal in Connecticut at the time, but he got them anyway, somehow.

Once we were walking the soft pine-needled trail around the reservoir and got caught in a surprise thunderstorm. There was an incredible downpour and hail and booming thunder. We ran in the direction of the car, lightning strobing around us. My dad shouted to fling the cap guns away, unless we wanted the metal strikers to draw the storm in and get us hit by some searching electric bolt. We were safe under the trees, he said, so we stopped at forested patches and caught our breath, then sprinted through the next clearing until we reached another stand of oaks, rain-logged sneakers coughing out cold puddles with every step. I felt certain we’d be struck by lightning that day, that the bolt would come crackling down for me, since I was the most afraid. I knew how it would feel: a buzz like a dying fluorescent bulb, world gone white, the gritting of teeth. And the way I imagined it, I would make my body the conduit, holding onto my father’s hand. 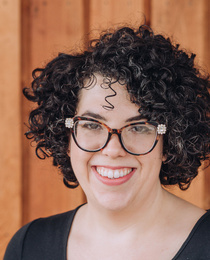 Steph Sorensen (she/her) is a feminist writer mom living in Pittsburgh, PA. Her writing has appeared in Barrelhouse, Mississippi Review, Matchbook, and 3Elements Review. She was named a Good Hart Artist Residency Writer-In-Residence for 2021, and was awarded the Anne G. Locascio Scholarship to attend the 2020 Mendocino Coast Writers' Conference. Her poetry has been nominated for Sundress Publications’s Best of the Net 2020. She can be found @phenompen and stephsorensenwrites.com.