Seventeen years on, and I still can’t believe I’m alive, Gabi, and you’re not. Bad days, I wonder which of us got the better deal.

But on the whole I am okay now.

I am flying down I-37 in the bright heat, taking this highway for the second time in my life.

But now my hands are on the wheel.

When I first saw the bright gold rip of gas flares against the Corpus night sky from the passenger seat of some guy’s green Datsun—all that oil just rushing incinerated into the air—I said, Damn, don’t they know about global warming?

Driving fast, you laughed and said, Welcome to Texas.

And we laughed hard like fools because I’d grown up in San Anto, same as you.

And now I’d have to alter my terminology to climate change, but I could ask the same thing, and the answer would still be Yes, they knew. They knew all along.

It was that loose year after high school when we were nineteen and didn’t know what to do with ourselves. I worked at Fuddrucker’s and smelled like meat; you cocktailed and got treated like it. To go out on the town, we scrubbed off the filth of our jobs and dressed like the hard tarts we weren’t. In the little dive bars we could afford that played good music by bands that would never make it, we’d dance until we couldn’t see. Your boyfriend kept smacking you because he suspected those nights you crashed at my tiny apartment on Huisache weren’t platonic, and they weren’t.

There’s no reason to drive to Port Aransas now. It’s not spring, and I’ve got no friends in this car. Just my purse. Just the decree with a judge’s fresh ink. Just a healed-up left wrist from the worst argument (the final straw, and me the camel dumb enough to take it for too long).  Just my worn-out paperback copy, all brown-ringed from coffee cups, of the Tao Te Ching, which they say is the foundational text of anarchism.

No wonder it wasn’t covered in World Religions 101.  Instead for three months the professor prated about patriarchs and slaughter.

Still wearing the back brace under my clothes, I dropped out of UTSA and married a guy with anger management issues and waited tables and now here I am.

Remember how we swam out so far we couldn’t toe the sand beneath us? It was night, and we weren’t drunk.

Your voice had sounded scared or excited when you called and said, Want to go to Padre?  Just get the fuck out of town? I’d never been; I was in my swimsuit standing by the door when you pulled up in a car I didn’t recognize, and we raced down I-37 talking about nothing as the sun sank over our shoulders. It was dusk when flares sparked the horizon, night when we parked in the sand.

We swam out too far to stand and hovered in the warm water an arm’s length from each other, letting our bodies be lifted and dropped by each wave. It was dark, just the moon and the vaguely orange sky that blackened as it spun away from shore, and we floated on our backs with our feet to the horizon, staring out toward endlessness, feeling the crazed danger of letting ourselves be tossed, with who-knows-what wild sea creatures circling beneath us.  Hours, we stayed out there, bobbing like the flotsam and jetsam we were, lulled by the rush of the water, screaming our girl-wishes to the wind. We floated in blackness together, our fingertips’ occasional grazing the only thing that reminded us we had edges. We lay there on the skin of the sea, dropped and lifted, lifted and dropped, a rhythm we became part of, brined and exhausted and dehydrated and ecstatic, until the sky silvered with sunrise and clouds towered over us, softly gilded with rose and gold.

When we finally turned and swam toward shore, our arms trembled as they cut the waves, and we walked out of the water hand in hand, like mermaids who’d traded their tongues for human legs. By the time we got back to the green Datsun—the car you’d jacked from your cousin in San Anto, the car with a kilo concealed under the back seat, the kilo I didn’t know about yet—our skin was wind-dried and our dark hair tangled down our shoulders in Medusa coils.

At Pancake House in our t-shirts and bikinis and rubber flip-flops, we sat in the booth and ate sugar and flour until our bellies bulged, stoned on the goodness of maple syrup—the cheap, sweet kind thicked with Karo. Gold disks of pancakes crisped brown at the edge. Butter that oozed and slid to the side. Coffee doused with cream and way too much sugar. We were girls, smooth and slender, with bodies like engines: that’s how we ate—how we always ate then.

We’d lost the need for speech. The carbs slugged our minds but the coffee revved us, and you stabbed your slice of orange with a fork and said, Fuck fuckin’ San Anto. I shrugged and nodded. I had sixty-four bucks and no one who’d miss me. We got in the car and you drove north.

At noon with the sun blistering white overhead, we pulled off on a little side road and parked in the shade and slept in the car with the windows rolled down. When we woke, everything had that late-afternoon feeling. The hum of cicadas swelled and faded from the fields, and the breeze smelled like trees.

You stared out the windshield and spoke to yourself. He won’t report it, you said, but he’ll come after me. You explained it all. He was your cousin, so he wouldn’t kill you, but he’d make an example. He’d have to. So we needed to disappear. You said how much we could get if we could find a way to move it. We could live for a year or two, easy.

I had nothing to go back for. I hummed the song I’d sung before—Let us be lovers, we’ll marry our fortunes together—and you laughed and said, Why you gotta listen to that güero shit?  You leaned toward me and threaded your fingers through my hair. You tilted my lips like a cup.

It was sunset when we pulled back onto the highway—I won’t sensationalize it, even to myself, despite the adrenaline still lacing the scene in my memory: you drove, you weren’t even speeding, and when the blue lights flashed behind us, your dark eyes swung to me.

They said, You know what they done to me in juvie.

I didn’t need to nod.

Your eyes said, No way I’m going back.

You read my face and floored it.

But only you got free.  I got pins and stitches and a cast on my arm and a back brace for five months and told about nine hundred times how lucky I was. When all I wanted was to be in the ground with you.

I lied to everyone—the cops, the judge—about how I was just your friend trying to help you through a rough time, how I had no idea about the coke or that the car was stolen, how you’d seemed troubled but I didn’t ask questions. They bought it because they had to use tools to get the back seat open, so I had plausible deniability and no record, and they loved the word troubled: I could see their eyes light up when I said it.  So I said it a lot and tried to put a look of pity in my eyes about you. I acted like I’d never felt the hard rise of your clavicle under my lips, like your fingers never traced my ribs, light as dust. Like my mind had never melted when your mouth was on me, like we’d never hung suspended all night in the web between sea and sky, yelling at the top of our lungs to no one. Like I’d never lain curled behind you in my single bed on Huisache, thinking I marry you hard into the back of your skull, our bodies rising and falling in time as you slept and I lay awake dreaming of a future full of you.  I betrayed the memory of it all, Gabi, because lies were the only way to keep it sacred and untouched.

I buried it deep where I thought it couldn’t hurt me, and I walked away, or so I thought, and plunged back into what was left of the life I’d meant to leave behind.

Alone now and thirty-six, raw with divorce and the stench of mistakes and good intentions, I pull my car onto the sand. I shed the skin of the nice respectable skirt and blouse I wore, shaking, into the courtroom. I wade out into the cold Gulf, salty and polluted, my thigh-flesh pimpling with chill.  It’s daylight.

But you elude me still, as you eluded me in life, which is how you make someone crave you like a drug and love you forever, you told me, pretending to give me advice about men.

It was your cousin’s mother that called it in; she knew what her son was capable of.  Better for him to lose the car and the money, she thought, and be pissed at her for a while—because what was he going to do to his moms?—than for her best niece to lose her pretty face forever.

But she didn’t know it would go that way.  At the funeral, she would not stop screaming.

I swim out far and ride the water a long time, weightless, staring at the bright horizon until my cheeks start to sting with sun and salt, and then I just go limp and let the waves drift me back to shore where my body grows heavy, newly full of gravity again, and I haul the rinsed machine of myself up and out of the water past guys sunning themselves on the sand who glance and say things, but that ship of lies has sailed, and I’m no more interested in my flesh than I was at nineteen waking up in that hospital bed alone. Since then, my body has been just a house for my thoughts to ride in.

Just the camera I dolly around the world.

Just the Trojan Horse in which I arrive.

Inside myself, I have been hiding.  All these years, I’ve been in here, crouched and cramped.  And now the sun is setting.

I am here to sack this city.  I’m here to burn this city down. 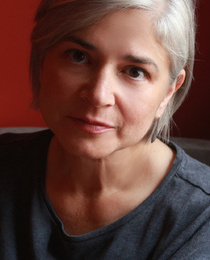 Joy Castro is the author of five books, most recently the short story collection How Winter Began (University of Nebraska, 2015). Her essays, fiction, and criticism have appeared in Ploughshares, Brevity, Seneca Review, Senses of Cinema, Salon, Women’s Review of Books, The New York Times Magazine, and elsewhere. She’s the Willa Cather Professor of English and Ethnic Studies at the University of Nebraska–Lincoln, where she teaches literature, creative writing, and Latinx studies.