On the drive home, I watched the wildflowers bedded along the highway. I'd just cleared the Appalachians, coming east for the summer. The indigo, sun-yellow, and ruby bulbs hemming the roadside reminded me of my Grandma. She used to say they were the prettiest thing, smiling with closed teeth, as if aching to take a bite. When I was eight, she came up from Carolina to help my mother get her legs beneath her—it was cheaper to move her in than keep all of us kids in daycare. We piled into this townhouse that overlooked a hundred yards of hills ending at a board fence that masked us from the main road. I played in the shadow of that pressed-wood barrier, where wildflowers scattered between unimpressive trees whose leaves grew in patches due to rot. Grandma chain-smoked on the stoop, would pull my ear if she caught me trampling them. She told me Lady Bird Johnson had been afraid they'd disappear so she had roadsides seeded across the country.

My Grandma was proper southern, used to punish me for every little thing—a hundred sentences for carving initials on my bed frame, a smack on the head for every curse. Still, her presence that year—sitting on our secondhand velvet couch, getting in our business while she quilted—it afforded me a reprieve from the abuse that began a couple years prior, that started up again when she had a nervous breakdown and left. She told my mother that she'd raised us better than to live like filth, and the next summer, when the squalor in our home was overwhelming, she locked herself in the basement and threatened to cut her wrists with a Lady Bic. After a weekend in the hospital, Grandma was off to my aunt's place further north.

The rape had been frequent enough that my terror had given way to confusion, then numbness. I learned to retreat inside myself, to create an unreal world that only I had dominion over. It was coming back from it that I was too young to figure out. In that townhouse, where I didn't have to withdraw, I hid in the hills spilling out from my front door. The sun cut through the fence like a sieve, and in the hours I caught its beams in my hand, I figured the god I grew up with didn't exist. Sunday school had taught me misfortune was not a sign of his absence, but to believe in his existence meant that I was built to suffer. What I worshipped was Tough. Back then, I thought being tough meant being alone, so I'd grown quiet, would head out after breakfast to hang from those shitty trees, placing action figures in their branches and knocking them loose with rocks I dug from the ground.

One day, I pulled a flat stone from a crag near the fence, and from the hole it left behind, a hornet sprang clear. I'd never seen an insect that large—too big to hide in my hand. I remember how loud its wings droned as it circled me. I raised my arms to mask my head, and before I could run home, it bit me on my middle finger. Grandma stubbed out her cigarette when she saw me wailing. I told her how its eyes were red, its body striped black and navy. As she took my hand, she said, Oh quit telling stories. It must've been a bumblebee. The bite rose up, a speck of blood pooling on my dirt-stained skin. She held my wrist and thumbed a wad of spit onto the wound, ripped the filter off her Pall Mall and spread the tobacco where she'd wet. My hand tingled as that brown grit settled. She told me to leave the bees alone, that they were what kept the flowers growing and those flowers made the day sing.

When she went inside, I gathered my toys in the ditch between two hills, and, for a moment, I let myself believe I'd been untruthful, that the cause of my harm had just been another thing I imagined. The bumblebees and yellow jackets listed around in the ankle-deep grass, and I went to stomping them to the dirt. Fearless, I ground their bodies with the heels of my sneakers, filled the treads with brittle legs and patterned flesh. And when there were no more to kill, I kicked the flowers, sent bursts of petals coursing through the air. My legs got tired—I wrapped fingers around stems, started ripping them up, choked them into a bouquet too big for my hands, piled them against my chest and left them to wilt in our yard. Grandma came out for a smoke, her thumb trembling on her lighter. I can still recall the itch of pollen and dirt on my forearms as she looked me up and down, all the color scattered across my shirt. She said, There's just no good to you, huh?

Later, we moved across town, and I never went back to that thin house, that rough field, not sure why I bothered to stop there on my way home. I parked my car and passed by the mailboxes into the hills. The slopes used to be exhausting in scale, now just three strides to the crest. And from the top, the area I used to get lost in, to reign over, was no longer vast, but had contracted in that unexpected way things do as we get older—how your mother will, someday, feel fragile in your arms. How your greatest family conflicts will diffuse down from insurmountable to laughter-fueled retellings over a holiday meal. Or else fade into something so unsaid that on a quiet night, up too late and waiting for sleep, you might think it wasn't real. Except it was, because you survived it. It's how you know survival is just every single fucking thing after the moment you became valueless. On that hill I used to know, the fence down the way is thick with two decades of rain, and the trees are still withering. Wildflowers pock the grass as if they never suffered me, and when I see it, I think—God damn. That is the prettiest thing. 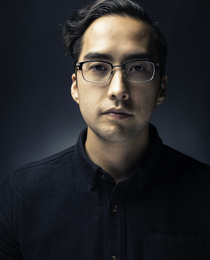 David E. Yee is a fiction MFA candidate at the Ohio State University where he was an Associate Editor for The Journal. Sometimes he misses Baltimore. His work has been published or is forthcoming in Sycamore Review, NANO Fiction, and Bartleby Snopes.