When I was eight, Papa Tushka crashed his Chevy Malibu through the front of McCoy’s Texaco. Steve McCoy went to high school with Mama, and he didn’t file charges. Papa blew way over the limit on the field test, but he swore it was a set-up. He kept a loaded assault rifle next to the front door, and a handgun under the seat of his truck.

As the procession pulled graveside, the valley clouded over. A wall cloud brewed in the east. The funeral home pitched a tent and set up a few dozen plastic chairs, throwing in a bouquet of white lilies for an extra fifty dollars. Papa’s grave was beside a plum tree. Our house, a split-level clapboard heap, sat slightly askew on top of Digger’s Hill, next to the cemetery. I could see my bike propped against the porch from my folding-chair under the tent. The graveside had a pretty big turn-out, and I could barely hear the priest over the blowing noses and muffled sobs. The Catholic priest was the only preacher in town who’d do the service for free, and the tribe only covered half the cost of the funeral home. I heard Mama and Uncle Jake talking about it.

We buried Papa Tushka in a plastic casket.

We all lived in Papa’s house: Papa, Nana, Mama, me, my sister Lucy, Uncle Jake, and Aunt Judy’s girls, Angie and Karen. Aunt Judy lived in a trailer in Winona. Uncle Jake said she was a two-bit junkie whore, but we only saw her at Christmas.

He died on a Wednesday. Some farmer saw the accident, said the truck was swerving before it ran off the bridge. Clipped a low-hanging branch on the way down and ripped the cab clean through. The paramedics used the Jaws of Life to cut Papa out of the front seat.

Mama told me I was Papa’s favorite because I wore my hair in braids like he did. Papa wrapped his braids in strips of red cloth like the singers at the pow-wow. My braids were skinny and the color of straw.

The night Papa died, Uncle Jake caught me sitting on his bucket in the garage. The house was more crowded than ever with Papa and Nana’s friends, and I didn’t like to cry where anyone could see me. Uncle Jake sat down on the steel frame of a car he was stripping, a bottle of beer in his hand. He took a sip and lit a smoke. He had a heavy silver lighter that clicked shut.

“What’re you doin’ in here, Tree?” His mustache bristled as he chewed the filter.

“I didn’t want to stay in there anymore,” I said. I tucked my knees into my t-shirt.

“Yeah,” I said. I stared at a pile of cat litter soaking up an oil slick. “Do you think Papa’s in hell?”

Uncle Jake chuckled. “That’d be about right, huh?” I let out a little cry and he straightened up. “Nah, nah, I’m just kidding. Don’t let any of that hell shit get under your skin.” He sucked on his smoke and exhaled through his nose. He looked out through the open garage door and waved his arm across the sky. “See those stars? I like to think that’s the spirit of the Tushkas. Each and every one of us’ll be up there someday, lookin’ down on what’s left.”

I sniffled. “That sounds alright.”

“Pretty good, huh?” he said. He swigged the rest of his beer. “I got it from The Lion King.”

Papa was afraid of flying, crowds, and cops. He didn’t trust doctors or insurance men, and he slept upside down in a recliner. He said it relieved the pressure.

The funeral reception was a tribal affair at the Community Center, and Francis Strike Axe manned the door. He had a smoldering bundle of sage that he waved over everyone as they came in. It was supposed to get rid of the bad spirits anyone might be carrying around, but I still felt an angry knot in my chest. Mama was busy taking care of Nana, so I stuck close to Uncle Jake. After he’d made the rounds, grasping my shoulder and nodding gravely at all the well-wishers, he pointed me towards the buffet and headed to the back. Angie was showing Karen and Lucy the crooked hoop earring she’d pierced her own belly button with. It had bled through the front of her dress. I turned and followed him.

I found him back by the Center’s air conditioner smoking a hand rolled cigarette. The smell was sweet like pine needles. He held the cigarette behind his back.

“I’ll wait,” I said. I sat on the air conditioner next to him. I pointed at his cigarette. “That smells nice.”

“Twelve and a half,” I said. I smoothed my black dress over my knees. There was white cat hair stuck in its weave.

“Now you know the Tushka secret,” Uncle Jake said. He held up the joint and pointed to the wet crease along the paper’s gum. “We’re a bunch of stoners."

Inside, the dinner was starting. I heard Greg Murphy, Papa’s best VFW buddy, giving orders to try his wife’s chili.

I didn’t notice when Papa was drunk, like I never noticed when Nana, Uncle Jake, or even Mama had been smoking pot. These were just states they sometimes occupied. Papa was funnier after a few drinks, mostly.

When Lucy was a baby, Papa’s yappy little dog snapped at her and Mama kicked it across the room. He yanked Mama by the back of her dress and threw her out of the house. Papa sat in the doorway with the assault rifle across his lap and lectured the empty driveway on the merits of responsible dog ownership.

“If you wanna act like an animal,” he shouted into the dark, “you can sleep with the coyotes, all of you!”

He fell asleep there. Mama woke him up when she came home in the morning and made him a pot of coffee.

I sat next to Mama on the couch when she called our relatives. She had Papa’s rolodex on her lap and was flicking quickly through the cards, running the tip of her figure over each number as she dialed. Papa had filed Aunt Judy under “U,” penciling in “ungrateful.” Mama choked when she saw it, smiled a little, and began to cry again. Her eyeliner ran into the bags beneath her eyes and her nose was red and swollen. We had the same straight nose.

I didn't know what to say to her.

Mama wiped her eyes and hugged me to her chest. She was wearing a sweater she’d cut the neck out of, and I could see two sets of footprints tattooed on her chest. The set on the left was mine, “Treena” written in script beside it. The other was Lucy’s, but Mama hadn’t gotten the money together to get her name, too.

She kissed the top of my head and rubbed my back. It made my skin itch, but I let her do it. I didn’t want to make her take care of me. I bit my lip, grinding my teeth over the inside of my cheek at the same time. I felt a hiccupping sob waiting in my throat and I swallowed it.

The night before the funeral, Mama and Uncle Jake took Nana to the bar. Angie, Karen, Lucy and I were sleeping in the living room. The VFW was throwing a wake of its own, and Mama had left Angie in charge. We watched a handful of Disney movies before Angie wanted to do something else.

“I know a game,” she said. “It’s called 'Night Light,' and what you do is you put your arms like this—” she crossed her arms over her chest—“and hold your head down—” she leaned forward as if to touch her toes—“and you breathe really fast, then push yourself on the wall—” she reared back against it—“and then somebody pushes on your chest and you pass out.” She put her hands on her hips. “Who’s first?”

Karen stepped forward. She was much darker than Angie, probably because her dad was rumored to be Mexican. That’s what Papa said, anyway. I watched Angie directing her from my seat on the floor.

“Are you gonna do it?” Lucy sat next to me on the floor.

Angie let Karen double over and pant. She narrowed her eyes at me. “You’ve been weird all week. What’s wrong with you?”

“What if Karen goes retarded or something? What if you hurt her?” I asked. Lucy nodded beside me.

Karen threw herself back on the wall and Angie pressed hard on her collarbone with both hands. Karen gasped for a second and then her eyes rolled back and she slid down. Angie let her fall to the floor, grinning from ear to ear. Lucy pulled on my arm.

Karen came to a few seconds later, cross-eyed and mumbling.

Karen smiled and nodded. “I wanna do it again!”

“Not yet. It’s someone else’s turn,” Angie said. She fished a potato chip out of a bag on the couch. “Who’s next?”

After the army band played and they gave Nana the flag, the pallbearers lowered Papa’s casket in the ground. Most of the crowd headed straight for their cars, eager to change clothes and get to the reception. The hearse drove Mama and Nana home, and Uncle Jake agreed to take us home in Nana’s Lincoln. He was talking to someone by the road, passing a cigarette between them. The funeral director asked us to give up our seats so they could pack everything up. We waited under the plum tree.

When he’d finished, he came and stood next to the grave. “One last service for the old man, huh?” he said. He motioned us to get up and join hands, and we did. “Everybody close your eyes.” I didn’t. “You, too, Tree.” Uncle Jake took a deep breath. “Papa Tushka, father, grandfather—you were kind of an asshole.” Lucy squeaked and almost jerked her hand from mine. I squeezed her fingers. “But either way, we’ll miss you.” I squinted out from one eye. Uncle Jake was looking at the sky. “Amen. Now spit!” He spit on the dirt and Angie was the only one to follow suit. “And run!” He took off toward Nana’s Lincoln, whooping like a kid. 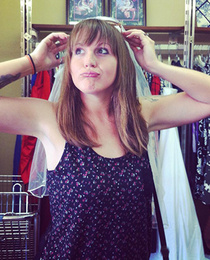 Savannah Johnston is an enrolled member of the Choctaw Nation of Oklahoma. She completed her undergraduate degree at Columbia University and received her MFA at New Mexico State University. She was most recently the Managing Editor of Puerto del Sol, and her work has appeared in Portland Review and Moon City Review. She can be found shouting into the void on Twitter at @savrjoh.