I tapped the frame that kept the medal in its pristine condition. "So . . . you killed one of your own people for this?"

Grandpa laughed. "One of my own people? They tried to put bullets through me. No, the North was the enemy. My people, my allies, were the Americans."

Then I felt sorry for bringing this whole topic up, and told Grandpa to get Grandma so we could go to Mary's Lotus Garden for our weekly Dim Sum brunch.

Grandma took forever to get ready because she was really old. Like she had been in the hospital four times already for age-related issues. I didn’t know the specifics, and I didn’t ask. No matter the disease, the end result would be the same. And who wants to have a little kid bug them and remind them they’re dying? I focused on the good stuff, like delicious shrimp balls at Mary’s Lotus Garden.

“When are we going?” I shouted. I got off the couch and went to their bedroom. As I passed the bathroom, I heard something. I opened the door and there was Grandma lying on the floor, groaning, her white dress soaked in urine. “Grandpa!” I called.

I wanted to help Grandma. I really did. But I couldn’t be close to her. I couldn’t let the urine touch me. I couldn’t grab her arm without thinking about the bones breaking into a hundred pieces.

Thankfully, Grandpa pushed past me and took care of business. I stood in the doorway.

I wasn’t expecting him to be so gentle. He got down on the floor and pulled Grandma into his chest. He lifted her and carried her to their bedroom. He used just enough of his strength to hold her without bruising her paper-thin skin. He took careful steps so the journey, no matter how short, was more comfortable.

I knew better than to say these things out loud. Grandpa shut the door, and the past was the past. He did all those things before he married Grandma. Before he became my grandpa. The least I could do was give him the benefit of the doubt. But still, there was that frame with the silver medal in it, hanging on the living room wall, staring down at me.

On the drive there, they fought. I tuned them out. Or I tried to. Grandma stayed calm the entire time, stared out the window, the trees blurring past it. Grandpa slapped the steering wheel a few times. There was real frustration in his face, as if he couldn’t find the right words. One second he was fine, the next he was not. He changed so quickly and so often, I couldn’t tell who he really was at times. Then I spotted it. The sign. “We’re here,” I said, hoping Grandpa would calm down. “Let’s eat,” said Grandma, and she rubbed Grandpa’s shoulder and his face softened.

The weekly brunches were my parents’ idea. Grandpa had complained that I didn’t visit enough, that I always had some sort of excuse, which was true. No middle school kid actually did homework on Saturdays. Then Grandma was hospitalized, and everyone in my family went to visit except me. I told my parents I had to do a school project. They came home and found me playing Call of Duty.

There were other reasons, too. My parents owed Grandpa big time. Without him, his beloved America would have booted our butts off the mainland.

When he said America was his people, his ally, he meant it. They had taken care of him. And I don’t just mean the medal, I mean they had hooked him up with the best post-war gift you could think of. A one-way ticket out of a war-torn land, plus extras for family members. See, while other Southern Viets fled Saigon on boats, risking their lives out in the open sea, while other Southern Viets had to rebuild their lives out of bombed houses, our family could rely on the Americans to help us catch the next flight out of Saigon and become citizens of some place intact and whole, without any bureaucratic hassle. At least, this was Grandpa’s version of the story, and he made sure none of us forgot it. What reason did I have to question him? None.

Still, I always felt uneasy hearing him talk so cheerfully about the War, about the rush he felt when he shot a dude. Thankfully Grandma would see past my nervous smile, and break the tension by carrying out a tray of ch? from the kitchen. “Yea, yea, we’ve heard it all before,” she would tell Grandpa as she passed a cup to me. She was the only person who could say something like that without disrespecting him.

We sat towards the back of Mary’s Lotus Garden. Grandma ordered everything. From tripe to shrimp balls to shumai. I had no manners and immediately dug into the food. I noticed some tension between my grandparents, but I pretended to be oblivious. The food made it really easy to do.

Normally, Grandma didn’t eat much because of her stomach problems, but she always made room for shrimp balls. This time, she pushed the plate away.

“It tastes different,” she said.

“I’ll call the waiter and ask for another batch.”

“No,” Grandma said. “It won’t matter. I want shrimp balls from Vietnam.”

I wondered if Grandma had planned to bring up the topic like this. Using shrimp balls. Grandpa was so resistant to the idea that Grandma had to resort to any tactic possible.

It had started soon after the second time she was hospitalized. She kept asking to move back to Vietnam. Her days were fewer and fewer, so she wanted to end her life where it all began. Grandpa told her they could visit, but not relocate. Then he said, “We can’t just leave. This is our life now. We’ve built a good one here.” What everyone in our family, especially Grandma, knew but didn’t say was that: by we, Grandpa meant himself.

Grandpa ordered another batch of shrimp balls, and when they took too long to come, he got angry. “You have me,” he said. “You have your children. What more do you need?”

They continued back and forth as if I wasn’t there. Which relieved me because what could I even say? Then right on cue Grandpa looked at me and asked, “What do you think? What should we do?”

My eyes darted from Grandpa to Grandma. Anything I said would disappoint the other. So I made this deer-in-the-headlights face and said, “We should eat! That’s what I think. Like—I’ll eat your shrimp balls for you, Grandma.”

Maybe she felt bad that Grandpa had put me in such a tight spot, because she laughed and nudged the plate towards me.

Then someone placed a hand on Grandpa’s shoulder, and Grandpa muttered, “Finally,” probably expecting the waiter, but when he turned, a grin broke out on his face. It was some old dude. One of his many friends who existed to affirm his importance in our little town.

They chatted like long lost pals. I paid them no attention because I suspected Grandpa had planned this meeting. So far, every time we went somewhere together, even the laundry-mat, some old man always managed to spot Grandpa, and Grandma and I would stand to the side as the two reminisced about good ole times, meaning the War.

I spent the time finishing up the shrimp balls and afterwards cutting up Grandma’s shumai because her teeth were dentures, and crappy ones at that. Then I poured two packages of salt onto the pieces since Grandma’s taste buds were also shot and she could only taste extremes. I wondered why she even came out with us?  She took a small bite of the already small piece of cut-up shumai, and she chewed and chewed, and she looked at me approvingly, nodding, even though it must have tasted like crap, and I knew it.

The old dude walked away. He had been a pretty high ranking officer in the army, with all these honors to show for it. “He says he admires me,” Grandpa said, all smug. “A man like him, and he admires me.” Grandpa popped a shrimp ball into his mouth and grinned. I rolled my eyes and remembered the first and only time I saw him in his uniform, at a military ceremony a few years earlier. An old dude had called Grandpa’s name, and I remember Grandpa taking this deep breath before scooting his chair out, then standing like a soldier while the old dude pinned on his silver medal. Everyone got up and clapped. I had never seen a sight like that. We were in the middle of nowhere Kansas, and there were these people expressing their approval of Grandpa so emphatically and Grandpa soaking it all up. At the time, I thought: this is what I want, I want to be just like Grandpa.

“When is that new batch of shrimp balls going to come?” I asked now, wanting to change the topic.

When the waitress finally showed up, she tripped, and tiny plates fell everywhere and a batch of oyster sauce flew past Grandpa and splashed onto Grandma’s blue velvet dress. I expected Grandpa to lunge up and get into the waitress’s face, maybe even threaten to talk to the manager and use whatever status he had to get her fired. But again he surprised me. He was calm. He soaked a napkin in water and dabbed at the stain. “We’ll get it out,” he said.

A month later, he would hold a framed picture of Grandma with that same gentleness and care. He’d place the frame on Grandma’s altar, between an urn of her ashes and the frame with the silver medal inside. I would ask him why Grandma was wearing his uniform coat in the photo, and he’d say, “She was cold so I put it on her.”

At Mary’s Lotus Garden that day, Grandma sat back while Grandpa removed the stain. She looked at him fondly. It was a look that would stay with me for years to come, that I imagine she might have given him often in the earlier years of their relationship, a look of youthful abandonment, when age was not a countdown towards some tragic end but a promise of their limitless potential. 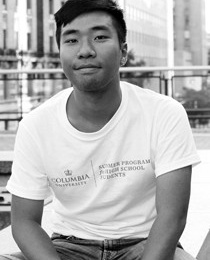 Nghiem Tran was born in Ho Chi Minh City, Vietnam, and immigrated to the USA when he was seven years old. He is a Kundiman Fellow, and his work has been published in Duende. He is an Education major at Vassar College.