"I am thinking that a poem could go on forever."
—Jack Spicer

Tell me the story of the night I was born.

Mother's palm on her laboring back, shopping for china.

This is an origin story, like the half­tale she tells, in a dress I imagine was red.

I'm as old as she was, and stayed up until five last night, waiting for Radiohead tickets.

I slept guiltily, woke to find them gone. I resolved to shed all numbers.

The warm sigh of our bed has whiskey on its breath.

Tell me if I will ever use love in a poem and be able to mean it.

Instead I mention the two gray hairs I dream of culling from your nape.

The shears cut like moonlight, the mouth lets fall its own name.

Tell me why I can't stop thinking about the city I loved so much I left it.

Now it's entrusted to women who waste their baby names on protagonists.

I have no use for imagined children: a string of light bulbs fighting.

You question the width of my neck; it still turns towards the lichened reservoirs.

Against an aquarium sky I count my fingers like my mother did, bleary through morphine eyes.

This poem is about the creature that swallowed ¼ of my pie.

The hope is that one day the highway lights will spell something out in Morse code just for me.

What is the difference between an urban backdrop and a picture taken in the city?

The photographed remain and disappear, eyes flat, glimmering, here and no place else.

Schrodinger used a cat, but to me there's no point unless it's an infant.

All my life I have been chasing the gestalt of a bend in the woods of Charlevoix, MI.

On my 29th birthday I will write a contrite poem about the child I bore and named Worry.

By then I will have given up on sestinas, the possibility of God, the wind that eats my kites.

The last thing I'll write is an account of the long year when death made a home in my eyes.

I was sixteen, and I don't think I've ever made it farther.

A decade of holding vigil for the houseguest who always comes.

I'm my own unruly golden dog. 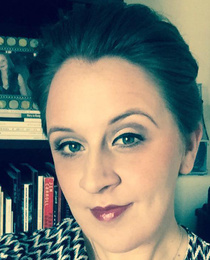 Caitlin Cowan's poetry is forthcoming or has appeared in Cold Mountain Review, Redivider, Nimrod, Faultline, The Mississippi Review, Poet Lore, and elsewhere. She has been the recipient of the Mississippi Review Prize, the Ron McFarland Prize for Poetry, and an Avery Hopwood Award. She holds a BA from the University of Michigan, an MFA from The New School, and a PhD from The University of North Texas, where she worked as a teaching fellow and served as the Managing Editor of the American Literary Review. You can learn more about her work at caitlincowan.com