­­The poems of Lost Privilege Company appear under the signature of the Blunt Research Group, an anonymous, contemporary collective of poets, activists, and scholars of diverse origin.

The poems (about 40 in all) are composed entirely from phrases drawn from individual case files of the earliest youth prisons in California between 1910 and 1925.  The histories contained in these files were gathered and archived by the now defunct Eugenics Records Office, an American organization that helped to shape the international eugenics movement through activities carried out in these juvenile reformatories (primarily at the Whittier State School, founded in 1891). Eugenics "researchers" and fieldworkers used these prisons--and the utopian fantasies of early California development--as a laboratory to develop diagnostic procedures intended to identify certain "ungovernable" teens as mental "defectives" and to construct genealogies of "degenerate" families.  These diagnoses were used to determine whether the “propositus” (the teen “ward” in the case file) should be recommended for compulsory sterilization--to prevent him or her from "procreating"--a policy legalized by the California legislature in 1909 and pursued with great vigor until the early 1940s. Over 20,000 people were sterilized in California during this period, and some of the teens in these poems were referred to the sterilization "mills" of the Sonoma State Home and the Pacific Colony.

The development of eugenics touched the very core of the California myth:  the founding of Venice Beach, for example, by Abbot Kinney in 1905 was motivated in part by fashionable ideas about eugenics.   And, in a very different context, the diagnostic models and sterilization policies developed in California were enthusiastically received by eugenics "researchers" in Europe.  The social engineers of Nazi Germany drew directly on the California model.  In Mein Kampf, Hitler alludes enthusiastically to the eugenics policies implemented in California and, before long, the Nazi symbology of "degenerates" destined for confinement and extermination included the categories of the "Asozial" (the asocial) and the "Arbeitssheu" (the work-shy)—terms reinforced by the eugenics vocabulary of the California experiment.  The pseudo-science behind the earliest Nazi Concentration Camps (at Breitenau, for example, in 1933) can thus be traced, in part, to the teen prisons of the California dream.  Replicating its forgotten California affinities, the modern Breitenau facility eventually turned into a reformatory for teenage girls in the 1960s.  Ulrike Meinhof, before she went underground as one of the founders of the Red Army Faction, produced a radio documentary in 1969 on the teen inmates of the Breitenau school.

Venice Beach, it turns out, was once the other shore of National Socialism.  And the sterilization mill of the Pacific Colony was not far removed from the celebrity enclave of the Malibu Colony:  in name and geographical proximity, but also in the disparate fantasies of asylum and social rarefaction haunting those places.

Youths of all races were confined at the Whittier School, but most of the case files supplying the basis for these poems document the lives of Chicano or African-American youths, aged 13-17 years, in addition to recording the eugenics vocabulary used to condemn and curtail their ways of life.  Voices of diverse protagonists have thus been retrieved from these files: the direct speech of teen "wards," of their friends and families--and the comments of the eugenic "fieldworkers" conducting the interviews.  Text in italics always indicates the voices of the “wards,” while text without quotation marks or italics conveys the words of the fieldworkers. Text in quotation marks conveys the voices of the wards, or of their families and friends, cited indirectly by the fieldworkers. The names are real.

As partial transcriptions, the texts presented here can be read as experiments in investigative poetics:  an approach rooted in the methods of documentary sampling--a form of close listening--which makes no effort (in contrast to other models of appropriation) to avoid strong feelings.  Originally compiled to justify the elimination of certain populations, the case files can now function--contrary to their original purpose--as a veiled resource of fugitive expression, practice, and knowledge.

The ensemble of poems is entitled "Lost Privilege Company":  the name of the isolation ward at the Whittier State School where youthful offenders could be sentenced under harsh conditions for misconduct. Suicides in 1939 and 1940 by two Hispanic teens in the isolation ward brought unprecedented public scrutiny of the prison's history and methods.

Digital Editor's Note: These poems, because of the nature of responsive (mobile-friendly) web design, and the sophisticated formatting, are best viewed on a laptop or desktop screen.

never seemed to progress beyond
the "fairy tale stage"

Want your buttermilk and ice today?

if he ever decided
what he wants to do

his black cat or his parrot

no man lives that could ever tame me

couldn't remember
two articles if he was sent

all the bad characteristics of all         the boys

was heard to say

this is the last time
I’m coming in here

Made a fool of himself
too much already

he wanted us to keep on goin' with the bottle

at age 14 went out to work in the fruit

during the interview he told many strange tales

a fit candidate for the Pacific Colony

a good deal of this

sickness    in his     imagination

compelled to move
and broken-hearted         up north

don’t know what may have

become of them
by now

but the Chief Supervisor says
the boy has been truthful

and honest
and pretty trustworthy

Papa is as mean as ever

when he's home you know
how he is don't you

Henry gave "jiggers" while the older boy stole
some money.

for a long time nothing
was heard

of him the history of this family should not        be allowed 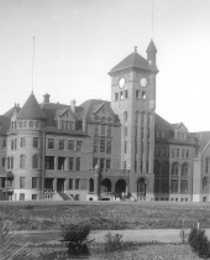 The Blunt Research Group is an anonymous, contemporary collective of poets, activists, and scholars of diverse origin.  Additional folios of poems from "Lost Privilege Company" can be found in the following journals:  The Offing, The Recluse, and Chicago Review.