Allie Rowbottom is a PhD candidate in nonfiction at the University of Houston and an assistant nonfiction editor at Gulf Coast.

What Would Jane Eyre Do?

There's this novel called Fifty Shades of Grey. You've probably heard of it. A lady named E.L. James wrote it. Judging by her website she likes Twilight vampires and teacups. If you haven't heard of James's book, or for some reason you've yet to pick it up, it's about a pedantic college student named Anastasia (literature major, thesis on Tess of the d'Urbervilles) who winds up in love with a big-shot entrepreneur named Christian Grey. Grey, eloquently described as, "attractive--very attractive," is somber and steely-eyed and tortured and all that inscrutable, broody stuff. Ana is suitably oppositional. She's plain, awkward and divorced from her own sexuality. Nevertheless, (or perhaps, naturally?), Grey finds Ana "bewitching" and before you know it, he's offering her Gangnam Style schwag (an Audi, a Macbook, a Blackberry...) as well as a contract obligating her to assume a set of specific, sexual submissions to his dominant predilections. Ana isn't sure what she wants and so, for 500 pages, readers are treated to her cliché-ridden accounts of the softcore BDSM sessions she and Mr. Grey engage in. Yawn. Still, people have been in quite a tizzy over this text, either because it's offensively badly written, or because the aforementioned softcore scenes heat up and bother their nether regions. Either way, it seems there's ample room in the gap between fans and detractors to ignore the novel altogether. Why then, you might ask, have I not done so? And more importantly, why am I forcing you not to do so here? Well, maybe it's just the time of year (first round of papers sitting expectantly on my kitchen table) but I'm in a comparative state of mind. I also have a bone to pick with Ms. James--but one having to do more with her characterization of literature than her bastardizing performace of its practice. Since Ana is a student of English literature, she is (therefore?) bespectacled and plain. She references Hardy's Tess often, and seems generally preoccupied with how Tess would react to Christian Grey. It seems James was hoping to have a kind of parallel going between her text and Hardy's (FAIL) and in the process, pull in other works of classic literature featuring feisty female first-person narrators and their dark and handsome love interests. In fact, Ana straight-out addresses three of these most obvious parallels when, in reference to Grey's sexual demands, she says, "Elizabeth Bennet would be outraged, Jane Eyre too frightened and Tess would succumb, just as I have." I won't waste anybody's time maligning the inaccuracy of Ana's reading of Jane Eyre here (personally, I have always suspected Jane and Rochester had regular and intense sadomasochistic pleasure-fests going on in their marriage). Rather, I'll simply say that I skimmed that sentence and threw Fifty Shades of Grey at the wall, asking myself why I'd picked it up in the first place. I picked it up in the first place in part because I'm usually pretty game to read feminism into subversive literary smut (though this was, sadly, exemplary of none of the above) and also because lately I've been meditating on courage, conviction, and clarity. Specifically, the clarity needed to identify what we want in life, the courage to ask for it, and the conviction to stick to it. Sounds very twelve-step, right? I think it's the word "conviction." But seriously, everywhere I go I meet people who have, for whatever reason, been unable to name their dreams, to figure out a way to tune out the cacophonous nay-saying voices which inevitably cue up in the face of desire and difference. So I'm looking to literature to reflect back the very emotional motifs I see out in the world. I'm looking to what people are reading now and in the past, and I'm looking to the writers and characters I've read and loved throughout my life. First, the classics: Scout Finch, Elizabeth Bennet, Jane Eyre, Pallas Athena. And later, the rebels: Chris Kraus, Clarice Lispector, Carole Maso, David Wojnarovitz, Anne Carson--the list goes on. And I've come up with an (admittedly reductive), albeit somewhat handy formula for this theme of conviction vs. hesitance. It's a binary but for the sake of fun, just go with it. Ahem½so there are two types of characters in literature: 1. Those who know what they want and so inhabit a text based on exploring how they get what they want; or 2. Those who don't know what they want and so inhabit a world in which their central desire is to figure that shit out. The heroine of Fifty Shades of Grey unquestionably fits into the latter category. But she's presented as having imbibed the Kool-Aid of a host of female characters belonging to the first group. Whatever she has ostensibly read, Ana retains none of the emotional fortitude or connection to individual sexual pleasure drawn in the classic texts she cites. That she cites them in the first place and is written into a forced connection with them is what makes James's novel damaging and one-dimensional. By comparison, the BDSM stuff and the abysmal prose are relatively forgivable. (But now, this just in! Something that is completely unconscionable: the vapidity with which E.L. James draws her principle characters is slated not only to infect, but to obscure the calm and steady strength transcribed by Jane Austen and Charlotte Bronte. Somehow, publishers of erotica have found a way to legally rewrite books like Northanger Abbey, Pride and Prejudice and Jane Eyre to contain the same sort of poorly rendered submissive sex scenes James heavy handedly peppers 500 pages of Fifty Shades with. See Alison Flood's piece for the Guardian for full details). 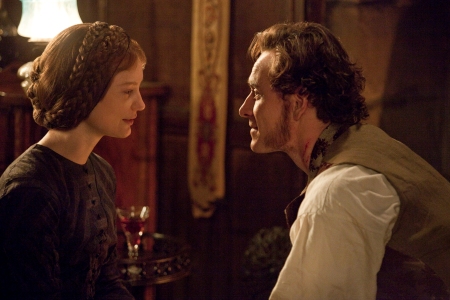 What would Jane Eyre say to all this? Reader, I submitted to him under contract, subverted my sexual pleasure and took all the schwag? I doubt it, although I suppose people have read her eventual decision to marry Rochester ("Reader, I married him") as equally vapid and oppressive anyway. I haven't, though; and for my money, Jane wouldn't be "too scared" of James's hero, her novel, or its suffocating, poorly rendered smut. She'd be pissed.