Patrick Clement James, a graduate of the Manhattan School of music, is an MFA candidate at the University of Houston. He currently serves as an assistant editor in poetry for Gulf Coast.

As hackneyed and clichéd as it is, I cannot bear the fact that time passes. I'm always talking about it. I obsess over it, and my friends find it incredibly annoying. But you have to understand that I was a very neurotic child, and for some reason I never expected to survive to the age of thirteen, let alone twenty-seven. So, I have a little trouble making sense of the growing collection of years I leave behind. There's something unbearable about the past. The very fact that it actually exists at all sort of blows my mind. Where does it go? Retrospect has a way of making me feel cheated. I think it has something to do with my fear of change, the terrible truth that nothing stays the same. In her book Eros the Bittersweet, Anne Carson explains the Greek lyric poets' attitude toward the transformative effects of Eros: "Change of self is loss of self to these poets. Their metaphors for the experience are metaphors of war, disease and bodily dissolution." Funnily enough, I feel the same way about the pernicious effects of time. And I think the comparison between time and love is fair because we often invest our time in what we love. We give ourselves over to it. And as we invest our time, we change--we lose ourselves. Our faces sag. Our hair falls out. We learn a little too much about the temporal mutability of desire. Our bodies and hearts change, our priorities evolve. Carson has much to say on the intersections of time, literature, and Eros. Further on in her book, she illustrates the power of writing as a means of manipulating one's relationships with change and love:

When you read or write you seem to achieve that control which the lover craves: a vantage point from which the dilemmas of "now" and "then" may be viewed with detachment. When desire is the subject of a text you are reading, you can open it anywhere and end when you like. If Eros is something written on a page, you can close the book and be shut of him. Or go back and reread the words again and again.

Like many lovers since antiquity, I have sought to control time and desire with my writing. Since I was a teenager, I have kept a journal; and like most adolescents' journals, it stemmed from a need to tell secrets. And as a gay man, most of my journal entries have centered on the subject of love: secret love, unrequited love, the love that dare not speak its name. When I could not tell my family or my community, I told my diary. It started out as a very self-conscious practice, and some of the older entries are pretty silly. But as I got older, my journaling became much more fundamental to daily life. My writing, in a way, evened out. My subject matter became more variegated, and as the world became more complicated, my need to clarify the muddle became even more essential. 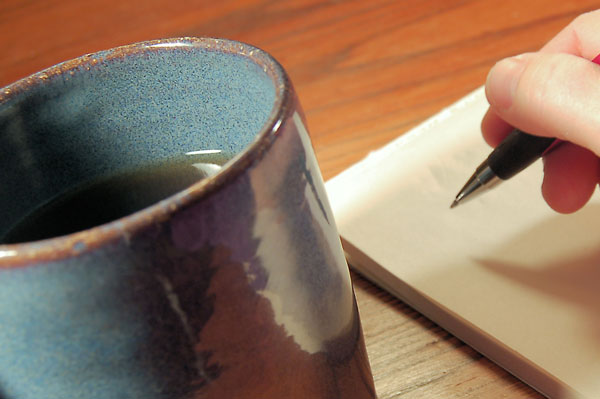 I think my best writing has always come out of necessity. Again and again, I've picked up my pen because there was no other place to tell my secrets. And surprisingly, it's the words I can't keep from putting on the page that often show me the way forward, that actually have any significance. Despite my desire to appear interesting and sophisticated, it's usually the awkward truth that turns out to be the most illuminating. I'm thinking especially of a time when I lived in New York City. I had just graduated from the Manhattan School of Music, and I was starting to realize that I would probably never make it as a professional musician. Even though I was still auditioning, there was a growing suspicion in my mind that things just wouldn't work out. I was not that kind of person: I just didn't have the talent or the drive. Also, to make matters worse, I was in love; and it was becoming clear that this particular relationship was going to end. It was inevitable. Within these growing realizations, I felt like a failure. At the time, I was working at a restaurant to pay the bills, and on my days off I would try to audition. At least that's what I was telling myself. In reality, I was freefalling, hoping that something would give, that I'd either find love or a career or something to make sense of it all. That winter, the heater rarely worked in my Harlem apartment, and I spent most mornings wrapped in a quilt on an old velvet loveseat. I looked out the window at an empty lot covered in snow. I wrote in my journal:

As I look back at this rather histrionic entry, I can't help but laugh at myself. How could I believe that life was so bleak? What was the big deal? But it's there, my self-aggrandizing despair as well as my own advice, right there in black and white. Maybe it's not my best writing, but I think I was getting at something important. The best thing I can do is write this. Sometimes, writing is the best I can do--any writing. When the world rejects the love I have to offer, I give it to my journal. Now, years later, I know the world will be just fine and life will find a way. And, the only reason I know this is because I survived it all--it's right there in the record of what actually happened. From that day in January five years ago to today, there is a line of writing that shows me how these things have changed. And I wouldn't have that if I didn't put it on the page. In my apartment there is a pile of notebooks: old self-conscious diaries documenting the small victories, the embarrassing mistakes, and the unexpected change. Here is where, as Carson points out, I can "go back and reread the words again and again." If I ever need to remember the person I used to be, I open one of those notebooks and see my old self quite clearly. And if I'm being honest, it's usually not as embarrassing as I anticipate. Perspective allows for empathy, for kindness. In fact, I often rustle up some sympathy for the younger version of myself. I actually like him, and sometimes I think he might someday make a pretty good writer. From this point of view, time doesn't seem so pernicious. Whenever I feel like I don't have anything to write about, I think about what I love. And I'm not talking only of romantic love. I'm talking about friends, family, and mint chocolate-chip ice cream. I'm talking about the everyday, lovely things. Even tonight, as I write, something about love sits in the back of my mind. It whispers softly against my neck. It drives me to the page. It's the closest thing I have to inspiration. And as I look back through the diaries and the years, there is the record of my love. I like that; it pleases me--that my life is documented and defined by what I love, that my writing is the means by which this is accomplished. Over the holidays I went back to New York to visit friends and family. While I was there, I thought about the past, the sense of possibility my early twenties offered, the people I loved. My friends and I recited old stories and told old jokes, and the year slipped forward. We watched 2012 drift away like a Viking funeral. Coming to terms with loss can be very depressing, but I have my notebooks, my documentation. I carry that with me--physically, it's with me. I can actually pick the diary up and hold it in my hand. And if I ever fear that the past will be lost to oblivion, I open one of my notebooks and take a look. I understand that Socrates would probably disapprove of my relationship with love, time, and writing. In Plato's Phaedrus, according to Carson, "Sokrates denies that wisdom can be fixed" and instead "emphasizes the peculiarly static nature of the written word." But in a life that changes and bends with time, with a heart that is all too susceptible to desire, writing is the only defense I have. I cannot keep my heart from wanting what it wants; I cannot hold anything forever. But the page can, and the fixed word can be rather comforting. For me, writing is a paradox; it lives despite its static nature. In the second part of Tony Kushner's play Angels in America, the character Harper declares: "Nothing's lost forever. In this world, there's a kind of painful progress. Longing for what we've left behind, and dreaming ahead." I read the play for the first time when I was a freshman in college, and that particular line has stuck with me over the years. I think it's important because it explains why I value writing so much: writing helps me mourn my loss while simultaneously giving me a space to imagine a future. I entrust what I love to my diary, just as we entomb the dead, and the blank page can be a place of burial, hope, and possibility.