Ben Murphy is a PhD candidate and writer studying American literature at the University of North Carolina at Chapel Hill. His research appears in Mississippi Quarterly and Configurations. Other writing—including essays and reviews—can be found at The Millions, symploke, boundary2 online, Full Stop Quarterly, and The Carolina Quarterly. He tweets @benjmurph 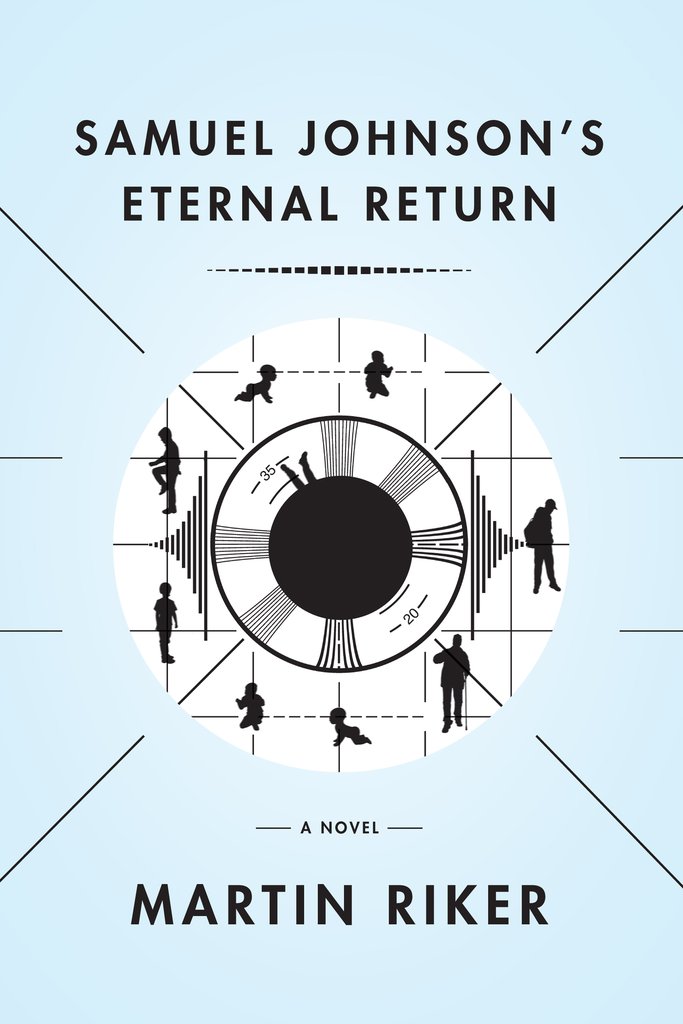 In advance of the publication of his first novel, Samuel Johnson’s Eternal Return, Martin Riker participated in a wonderful interview with writer, editor, and bookstore owner Stephen Sparks. Among other topics, the two talk at length about the aspect that first brought me to this novel—namely, Riker’s source material. Adaptation is not the right word, but there is a long tradition of returning to venerable books and old stories to make something familiar yet new. We could call this homage or bricolage, reinterpretation or restaging. In the interview, Riker simply calls his novel a “modern retelling.”

Of course, retellings often rely on the relative prominence of the source material—think, for instance, of the ongoing Hogarth Shakespeare series, which commissions authors of note to return once more to the well. But Riker selects for his retelling a book that only recently made its re-emergence in readerly circles, and even then, in fairly academic and scholarly precincts. Puckish publishing practices notwithstanding, the novel Sheppard Lee: written by himself was in fact written by Robert Montgomery Bird in 1836. The picaresque plot follows the titular Lee, a layabout farmer who dies in an accident only to find his soul making the rounds through a series of embodiments that run the gamut of antebellum society. A success of its day, Sheppard Lee all but disappeared into the archives before it reappeared in 2008 as part of the NYRB classics project. Whether Riker knew Sheppard Lee before this reissue or not, Samuel Johnson’s makes the author’s admiration clear throughout and even after the story proper ends: Riker’s acknowledgments page notes the “great debt” owed to Bird’s “wonderful novel.”

Having recently read Sheppard Lee for the first time, I expected to be wrapped up in the relays between Bird’s satirical romp through Jacksonian America and Riker’s latter-day recalibration. And to be sure, these relays are fascinating; one particular recalibration will be worth exploring below. And yet considering Samuel Johnson’s exclusively on the terms of its literary forbearer risks missing what makes Riker’s achievement singular and compelling in its own right, an achievement that begins building on the very first page.

If upon opening Samuel Johnson’s Eternal Return you did not already know that the novel is about a soul that drifts from one body to another, you might nevertheless notice that the prose does its own sort of drifting. Drifting not in an aimless way, but rather in an airy yet precise way, through many a dependent clause, an apposite phrase, and a landscape passed minutely in review. “Continue on,” we’re invited in the first paragraph, “along a narrowing road beneath a sky of leaves and branches, and soon you begin to imagine, or half imagine, that this place, these woods, are everything that exist in the world” (1). Riker is making his own world—not adopting Bird’s—and he invites us in with grace, good humor, and masterful control.

The “place” to which this initial drifting delivers us is Unityville, PA, a fictional community comprising some thirty religious zealots cut off from what seems to be the middle of the twentieth century. Initially we can surmise the time period only because the narrator, Samuel Johnson (no relation), is obsessed with television. Again demonstrating a prolix precision, Samuel recalls his first viewing experiences: “Lawrence Welk, whom I never cottoned to, was Saturday at nine, while Lucy, whom everyone loved and whom I loved more than I love any actual person, was nine on Monday, later moving to Wednesday at seven thirty” (9).

What’s a television set doing in a remote village populated by religious isolates? Would it help to explain that the television is brought to Unityville by an Amish man, Abram, a man who is not bad exactly, but also “not good at being Amish” and who has such a craving for worldly access that he ferried a television set horse-and-buggy style “all over creation, o’er hill and dale, through holepots and downwet” to gift to the town the aforementioned “heathen licthbox” (5-6)? Despite the undeniable absurdism necessary for this set-up, and helped along by Riker’s playful use of dialect, the book maintains its sense of control. We accept Riker’s descriptions—however strange—because they are so finely wrought and sensibly put. Thus, we accept that Abram, secreting his love for television from his Amish brethren, builds the television set a “good neighbor haus” at the outskirts of Unityville. A temple, a holy of holies for a heathen licthbox.

This “haus” soon becomes daily haunt for Abram as well as for a girl from Unityville, Emily, and then soon after for Samuel Johnson himself. The three gather regularly in a viewing ritual whose community stretches far behind the confines of the small hut: “One tends to think of watching television as a solitary activity, if not downright isolating, the opposite of wholesome social interaction. In its heyday, though, television was often the very site of such interaction, connecting directly inhibited individuals across impossible social voids.” After facilitating this social suturing, Abram disappears. Emily and Samuel consummate their mutual affection in the warm glow of the screen. “Nine months later,” we learn, Samuel Jr. was born as Emily dies in childbirth (15). Bereft, Samuel eventually slides further into the orbit of his always-on television set, an escape from his responsibilities. And here at the end of chapter one, our narrator Samuel Johnson dies, and—in keeping with Bird’s novel—the story turns to an episodic march through the embodiments of other people.

One moment Samuel Johnson is struggling with an armed lunatic who seems to be trying to kidnap his son, and the next he is looking down at his own bloodied body. While at first it seems that his hovering soul is alighting for the heavens, Samuel Johnson actually finds himself—or at least his soul, such as it is—flying over the forested PA landscape in a jet liner. Samuel’s consciousness, memory, identity, etc. has been transported to a stranger who at the moment of the gunshot was looking down from a plane window that was “sailing” some thirty thousand feet in the air. This is the first of the many bodies that Samuel will occupy. The old word for this is metempsychosis, or the transmigration of the soul from one body to another after death. Riker modifies this ancient concept—also beloved by Joyce—such that the business of soul travel seems more like television viewing or even video game playing than it does reincarnation or possession. Most importantly, the occupied bodies in Riker’s take retain control, at least for the most part; Samuel is a tenant who only slowly and by fits learns to direct the actions of his host bodies. This decades-long project of asserting agency works in the service of returning Samuel to his long-lost son. While maintaining the elegant absurdity established early on, this trial-and-error process culminates in a metafictional reveal that completely recasts the book. I will not say much for fear of spoiling Riker’s immaculately paced shift. But where most of the book is scrupulously self-conscious of its telling—“I considered ending this chapter here,” reads one characteristic flourish” (48)—the final chapters explain this tick while imbuing the voiceover with a driving emotional intelligence.

Buttressing this more personal journey is that major change that Riker make to Bird’s original approach. We might think of this change as an axial reorientation. Where Bird shuttles point of view through representative American types (a loafer, a miser, a slave, a philanthropist, etc.), Riker—as discussed in the Stephen Sparks interview—believes this to be an impossible task in a country too diverse and contradictory for him to capture. His solution is to shift from considering divergent perspectives to consider instead the way in which perspective itself shifts over time and through various narrative frames. Riker’s narrator watches modern America—and especially twentieth century television programming—unfold before the bodies he occupies. This pivot from Bird’s synchronic perspectivalism to a diachronic, temporal arc allows for the metafictional reveal. But more broadly this pivot also makes Samuel Johnson’s a fascinating historical meditation on the ongoing relationship between media forms—literature and television in particular. (The fact that Riker ends the novel with characters watching Netflix and the like—a more isolating experience than the expansiveness afforded by Abram’s mid-century television set—makes the book’s beginning with Amish brethren and a “heathen licthbox” all the more delightful.)

What is most entrancing about Samuel Johnson’s Eternal Return is the true depth and range present in a book that is, in some respects, a failed—or at the very least aborted—literary experiment. Though it is hard to explain and harder to justify, I cannot help feeling that Samuel Johnson’s is some sense a magnificent failure. One gets the sense that Riker did not so much decide to deviate in so many ways from Bird but instead simply wrote the only book he wanted to write, which happened to begin with Bird and end up somewhere very different. There may be a master key that unlocks the intertextual relationship in a way that escaped me, but I prefer to think that Samuel Johnson’s demonstrates how beginning with a familiar object of interest (a quirky nineteenth century novel, for instance) can lead—if followed rightly—to a site of novelty and abundance.