Justin Jannise is the author of How to Be Better by Being Worse, which won the A. Poulin, Jr. Poetry Prize and is forthcoming from BOA Editions, Ltd., in April 2021. His writing has appeared in Best New Poets, Best of the Net, Copper Nickel, Yale Review, Poetry Northwest, and New Ohio Review. He lives in Houston, where he is the Reviews and Interviews Editor for Gulf Coast.

"More than One Shadow": An Interview with Eduardo C. Corral

Eduardo C. Corral was the featured reader for the Gulf Coast Reading Series in September 2020. The afternoon before his reading, he joined Gulf Coast Reviews & Interviews Editor Justin Jannise and other students in the University of Houston’s Creative Writing Program for a conversation via Zoom about his writing process and his latest book, Guillotine. The following is an abbreviated transcript of their conversation. 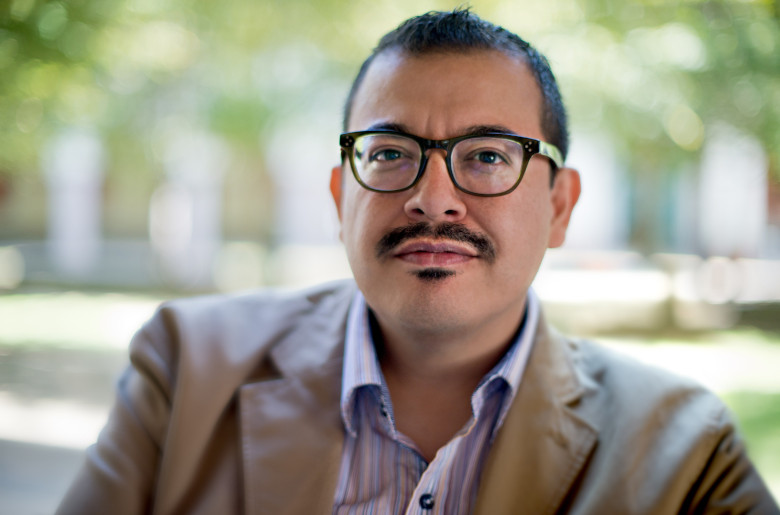 Eduardo C. Corral is the son of Mexican immigrants. He's the author of Guillotine, which was longlisted in 2020 for the National Book Awards. He is also the author of Slow Lightning, which won the Yale Series of Younger Poets Competition. He’s the recipient of a Whiting Writers’ Award, a National Endowment for the Arts Fellowship, and a Hodder Fellowship from Princeton University. He teaches in the MFA program at North Carolina State University.

Gulf Coast: How has the coronavirus pandemic influenced your writing life?

Eduardo C. Corral: One of the first things that happened to me right at the beginning of the pandemic was that I couldn’t read lyric poems. I tried to, and I couldn’t, because a lyric poem is an engagement with an interiority other than yours, and interiority was the last thing I wanted to think about and engage with. I was sitting on my couch 24/7 just thinking and dwelling, and I had enough of interiority. I was in the thick of it. Each time I engage with a lyric poem, I feel myself pulled into somebody else’s interiority, and I just couldn’t deal with it. It took me awhile to get back to feeling comfortable and ready to read the lyric poem, which finally happened sometime around July or August.

Gulf Coast: What did you fill your time with?

Corral: I read novels. In novels, the purposeful nature of sentences, of narrative, clicks forward traditionally, so that pulled me out of my thinking and dwelling on what was going on, which was very helpful.

Gulf Coast: When you say “click forward,” it reminds of the first time I saw your poem, “Ceremonial,” which is the first poem in Guillotine. For a special issue on revision, an early draft of “Ceremonial” appeared on the cover of the New York Times Book Review accompanied by your own line edits. How important is revision to your writing process?

Corral: It’s very important, and it’s labor-intensive. I draft and revise simultaneously. This is the process that led me to the poems in both Slow Lightning and Guillotine. If my first draft is in couplets, the second draft is in tercets, the next draft is a prose poem, the next draft is a single column of text, the next draft is a typographical arrangement with the language scattered across the field of the page. I am pouring my language into new containers again and again, and I make sure each container has a different line length. As I pour my language into these new containers, I’m forcing myself to rethink the syntax and diction of each line. I’m putting pressure on the line, thinking about the line, imagining different shapes. Usually by the twelfth or thirteenth shape, I have pared down the language to, to quote Stephen Dobyns, “the right words in the right order.”

Gulf Coast: Speaking of order, would you mind talking about how you approach sequencing poems for a full collection?

Corral: When I work with my thesis students at my M.F.A. program, [I approach sequencing in a similar way] to ordering the non-testament poems in Guillotine, the poems that aren’t part of a sequence and make up the heart of the book. When I finish a draft, I always give the poem three or four markers, such as “father poem,” “surreal poem,” “second-person poem,” “free verse poem,” and so on. This helps me in a couple ways. It keeps reminding me that my poems are more than one thing. Each poem casts more than one shadow. It keeps me from thinking of poems in terms of blocking, as in, “all these poems are father poems.” Yes, maybe on the surface, but there’s something else going on here, too. This creates more possibilities for order. The poems become more malleable, more elastic.

Gulf Coast: That seems like a really helpful idea. Would you mind elaborating on it?

Corral: Yes, it’s helpful for me, and my graduate students find it helpful when they’re ordering their thesis. It helps me to suss out what these poems are really about. They’re about many things at once. It makes sense to me because the self is plural. The self is fluid and in flux. My lyric poems enact that plurality, that fluidity. There’s always more than one subject.