The blood goes seltzer on 30th.  A memory picks itself up off of the ground, assembles,
sort of falls apart in daylight, street sounds, decades straddled in the crosswalk.
The bent torso of a spent cigarette, flicked from a passing car.  Wisp of smoke,
briefly, then stillness.  An open window, streaming music.

Because the car is in a dream you’ve had, keep having, the car you drive on rare ice,
which slides just out of control, into a telephone pole it glances off of, is
redirected by, the country road framed with snow.

This happened and, like everything that happens, also did not happen, not the way you
remember, remember most immediately.  How the distances collapse when
moving at speed, several instances of relapse folded until one prolonged scene, an
abrupt start from sleep.

Because the hand is on the shoulder—a stranger or a friend—the concern genuine, the
question answered with the eyes, open to everything, brief spasms around the
mouth.  It is dawn and it is 2 PM.  The voice is flecked with sleep, with cigarettes,
is interrupting the dream, the day.

Recalling how Blake, one time, wrote something about leaving through the windshield of
perception, I mean door—the small chimes of a door ajar.  A landscape mute with
snow.

Twin chirps of the horn, the four-door, and you’re in the crosswalk, late for class, the
appointment.  You’re in the country with nowhere to be, driving black ice,
anywhere, you do this sometimes—wake and drive, drive until awake—you
practice leaving.  You practice leaving and coming home. 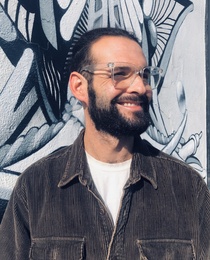 D.S. Waldman is a Wallace Stegner Fellow at Stanford University. His work has appeared in Kenyon Review, LitHub, Narrative, and other publications. Waldman has received additional support and awards from Middlebury College, and San Diego State University, where he earned his MFA. He serves as poetry editor at Adroit. www.dswaldman.com  @ds_waldman