The coroner is piecing together the tale of the pair in his possession.
As if their corpses are jigsaw puzzles laid out on a wooden table

in a farmhouse where the floors and the screen doors creak
and the beds are draped in cream and red stitched circle quilts.

The writer is cracking pistachios with her teeth and making
a mess of the tribal red Afghani rug beneath her feet, as if

she is a small depressed reddish-brown primate in a zoo cell.
The coroner takes note of the spanking new blisters on

purchased only three days ago from a Super Walmart,
along with three bags of potting soil and a flea collar.

woman whom the coroner is now interviewing at a coffee shop.
The writer had her very first latte the other day and is now actively

seeking to trade her small 14 carat gold heart locket with an ambrotype
photo of a pale saint inside, that her uncle Jimmy gave her as a girl,

for a machine that can make her a latte. Not the press-the-button
automatic machines found on the tourist rooftops in Trastevere,

but one with real steam that can scar you. That can impose upon
your neighbor, still in his rubber cow-milking boots, to have to

bring you to the emergency room and be subjected to a social-worker
interrogation, having mistaken the man, rather than the machine,

as the culprit. The coroner is listening to the new Leonard Cohen CD:
They’ve fallen in love / and now they’re speaking in tongues.

He knows this much about the deceased pair: they met at a Contra
Dance Convention, though she never clogged or skipped-to-the-lou.

She was the after-party dancer hired by the Hee Haws
to come up to the fourteenth floor at four am.

The French call the stomping contredanse;
and Saint Caedwalla is the patron saint of serial killers.

And the writer is chipping off blue nail polish from her fingers
and toes, further defiling the carpet. She can hear her man

has come home. He’s making the sounds of cans
of fava beans and tins of sardines going into cabinets.

The linguists asserting glossolalia is only a façade
of language. The only true thing is a bruise. 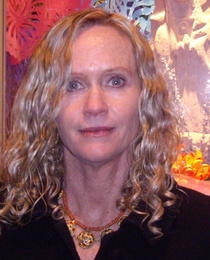