Gulf Shores, Alabama. The sun spun in its flaming sphere, light-belching charioteer. I was pale and in the ocean, naked but for a swimsuit and a snorkeling mask, which divided me from the world so I could see it. I sucked on the rubber mouthpiece of a plastic tube, which let me breathe towards the sky, turned away and underwater as I was. I saw my noodle white arm in the clear brine below me, clasping a little fishing net, with which I wanted to catch some exotic fish. So was I roaming beyond where I could stand, my gaze roving the tide-rippled sand, vacant of rock and weed, beyond where the others were. With each thrust I stuck my arm beyond the edge of the universe, and then there was more. And then at the bottom of the ocean I saw, slightly curled, a dark, eel-like shape. I saw it twitch a bit. The inside of my torso got hot with excitement. I wanted that thing, all by itself down there. I could watch it, but I would catch it, and show it to the others. I stopped breathing and dove. Can you be quiet underwater? I tried. I liked that the ocean let me glide. Closer and closer. It was an eel. It was a fish. It was mine. I reached out my arm I reached out the net. Then the ocean shook. I saw the sands tremble around the fish as it began to writhe on the ocean bottom there was no ocean bottom there was no little eel the sands revealed an immense stingray that had been buried with only its fish-like tail uncovered. Can you shriek underwater? I tried. The stingray flapped its flat black demonic bulk, and rose while I pawed and kicked at the water, reversing myself. With an unimaginable mechanism, it propelled itself away from me into the obscure, while I climbed frantically toward the air, each of us leaving a trail of piss and terror that the ocean intermingled in our absence.

This is one of 2 poems featured by Joe Fletcher. To read "Driftless," click here. 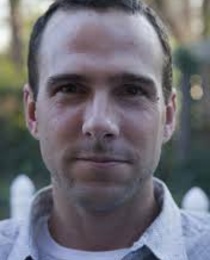 Joe Fletcher is the author of two chapbooks of poetry: Already It Is Dusk (Brooklyn Arts Press) and Sleigh Ride (Factory Hollow Press). Other work can be found in Jubilat, Octopus, Slope, Puerto Del Sol, Painted Bride Quarterly, Hoboeye, Hollins Critic, and online at joefletcherpoetry.com. He lives in Carrboro, North Carolina, and is the project manager of the William Blake Archive.