QUEEN AT A PARTY

Does the green dress sheath Herself,

shift limb to limb, parakeets on a wire.

was she Herself? Who Who, Queen

lowed across the fields. I must hoard

in my nest quarks, physics, bites

of self on self in furs, potpies, till my

things and I are one sleeping orange,

our nightmares lame ponies with death

invite a lady to creep her palace,

breed children for her, as a snake…

petals, shooting down the clouds

which frowned her. Bosom heaving

at the sight of puddings laid out, bombs

crouching in gelatin. Off she sneaks,

tail in a demon’s belly, digesting.

If all is orb, Queen is a spade poking,

a painful grass in ether. Circled

by others, theatre of moons, melting

To be sure, a dead rat will drop

from the cupboard. It is certain,

Outside, trees do not communicate.

Disease and leaves design the same.

Clouds have no harnesses, no desire

to break. No birds sing of mammoths

just for her; no mammoth will carry

Queen off. Each creature is a wall,

ornate, guard of nothing. When fleas,

seals, and barnacles speak at once,

that is the best the world can do.

Cacophony is crown, the rest is dim.

her bloated skin. Pulls them on again.

she prances. We gods nod. One god

into a fox coat. This, sandpaper,

punches gong, runs to the pond.

Queen’s robes are so long. Roll

beyond, coattails pinned to land.

in her shawl, hoof the back. Spots

But where is Queen? Is she with us,

in the hall? No—she is on the Great

Lemon Boat of Suffering. But near?

its princess hair. But is she—? No.

At the locust dinner. Inside hot

nostrils, she inhales, inhales the Earth. 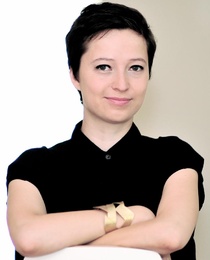 Taisia Kitaiskaia is the author of Literary Witches: A Celebration of Magical Women Writers (Hachette/Seal, October 2017), illustrated by Katy Horan, and Ask Baba Yaga: Otherworldly Advice for Everyday Troubles (Andrews McMeel, September 2017). She holds an MFA in Poetry from the Michener Center for Writers and her poems can be found in journals such as Crazyhorse, Pleiades, jubilat, Guernica, The Fairy Tale Review, and Fence.