To Allow for Tenderness:
Winner of the 2021 Toni Beauchamp Prize in Critical Art Writing

Miatta Kawinzi’s artistry is attuned to the pulse of their inner life, and often holds diverse states of being together with precision, through a complex and wide-ranging poetics. In the exhibition Soft is Strong, a strain of this poetics works through fragmentation and articulates a sense of being while Black, which is extended through the exhibition’s highlighting of softness, fragility, and multiplicity. These modes of existing are still often deemed weak by a heteropatriarchal order, and derided as feminine, self-indulgent, or not worthy of emulation. Counternotions to this order have, however, long existed in Black feminist thought, whose literary and aesthetic references resonate in this exhibition. As Toni Morrison asserted, being a Black woman writer was never a shallow place to think from— what she calls a “wakeful” position of working from the margin produces work that is lush and intricate, affording deeper wellsprings of revival and possibility.1 Kawinzi’s commitment to multiplicity extends not only to the relations between their references—which include Morrison and Nikki Giovanni—but to their choice of working with a swathe of mediums, across the image and performance, through performative gestures of sound, video, photography, and sculpture. All of these are deployed in this recent body of work. 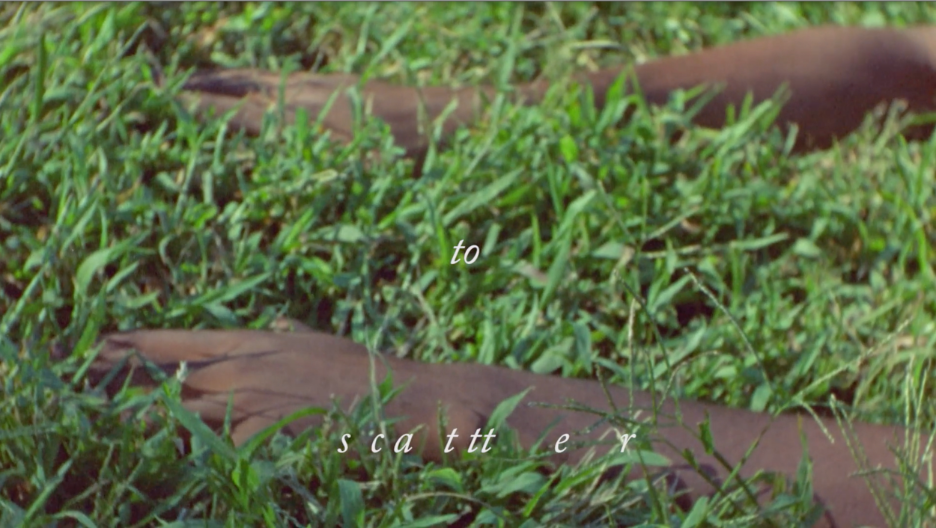 Footage of a railway track overlaid with another moving frame of the ocean begins SHE GATHER ME (2021) (Fig. 1), one of two experimental video works in this exhibition. In this video, Kawinzi sings a personalized rendition of “Dat Old Black Gal” in a soothing manner reminiscent of aural accompaniments performed through chore-hours in Black domestic spaces.2 The 11-minute video is interspersed with clips of moving imagery including a stark grey concrete building and pastoral scenes indicating what the artist describes as real and imagined geographies of the African diaspora. White texts are visually spread across the video, spatially broken into different pictorial compositions on the frame of various landscapes. This compels the viewer to pause and look at different points on the projection to achieve cohesion. The video switches between digital and analog clips: in watching these, the viewer’s experience leaps between different temporalities embedded within these landscapes. Rhythmically assembled as though a visual jazz, footage after the song concludes is spliced with gestures of hands reaching out with palms open, and weaving through grass. The video is replete with a polyphonic score that fuses organic sounds of breath and synthesized vocals.

To be intimate with Kawinzi’s poetics is to be attentive to the question of origins. Born and raised in the Southern United States to Liberian and Kenyan parents, the artist affirms how growing up in multiple geographic, cultural, and linguistic spaces influenced the parameters of their practice. This resulting hybridity undergirds SHE GATHER ME (2021), titled after a phrase drawn from a short monologue in the 1987 novel, Beloved, by Toni Morrison. “She gather me, man,” says the character Paul D., in a moment of tenderness with Sethe, the maternal protagonist of the story. With deep knowledge of the necessity for “a gathering” that could hold our being in whatever form, Paul D. characterizes this gathering as such: “The pieces I am, she gather them and give them back to me in all the right order.”3 The act of gathering can be an internal process to achieve resolution, or a form of grace given through acts of care and communing. In Kawinzi’s video, the body appears in movement within different landscapes, and is suggested by a white vest hung within a patch of plants. The merger of these landscapes with gestures or traces of habitation resolves the artist’s feeling of dislocation, and reveres land as a site of care for the body. SHE GATHER ME enacts gathering, and creates a sense of belonging across various sites including New York City, Johannesburg in South Africa, Detroit in Michigan, Santo Domingo in the Dominican Republic, and Tulsa in Oklahoma. As a whole, the abstracted landscapes of Kawinzi’s work do not finalize belonging as a settled thing—as is not the experience of the Black diaspora—but situates belonging within a concert of fragments, possibilities embraced and left open-ended for continuous construction.

Another work in the exhibition, New Patterns (2021) moves in dialogue with visual culture from Ghana. A monochrome photograph of two hands clasp a sunflower with the words “in defense of flowers,” borrowed from Nikki Giovanni’s prose poem of the same name. This phrase is splayed across the bottom of the photograph, towards the edge of the frame. This image—The fragrance of our blooming (2021)—is placed over a wallpaper inspired by the colorful Ghanian Kente textile patterns. A commingling is present here. The image on Kente connects the African Diaspora to West Africa, opening onto a meaningful interpretation of duality carried by the Akan adage, baanu so a emmia: when two carry, it does not hurt. Interdependence, reflected by two or more people shouldering effort together, expresses communal relations that have long been practiced in African traditions. The dynamics of village clusters since pre-colonial systems of extended cohabitation, conceived forms of care beyond limiting and individualistic ways of navigating the world. Such care is a way of survival through others, or many. 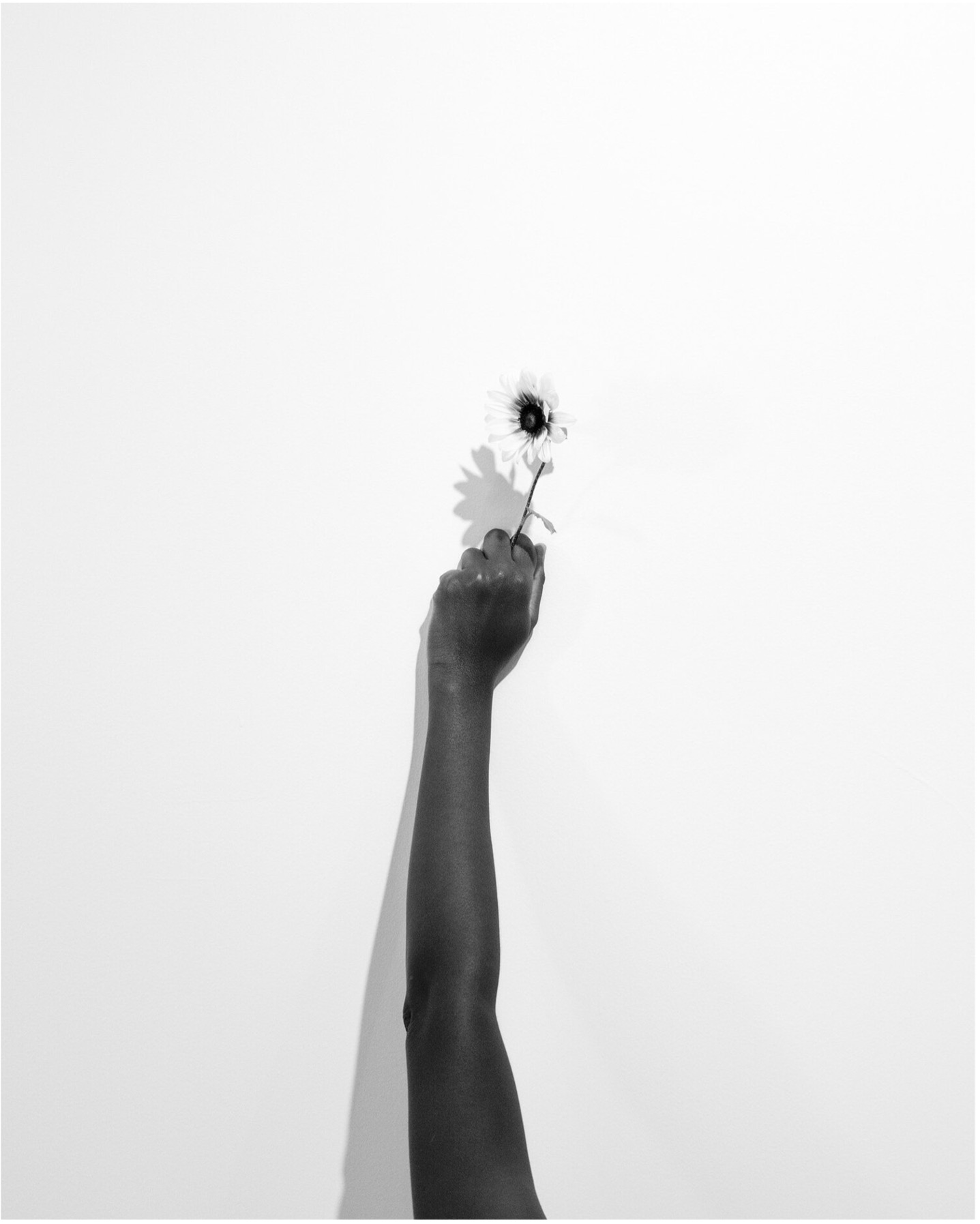 An alternative symbology of flowers, and the gestures of reaching and holding, signify richly across the works in Kawinzi’s exhibition. River City (2021) (Fig. 2) exemplifies another instance of Kawinzi’s hybrid material approach, comprising a photographic diptych connected by a meshwork made from cotton blue threads and cream cowrie shells. Flowers appear again. The photographs are inverses of one another, and each frames a hand holding a sunflower stalk. Dwelling with what the recoded symbol of flowers could mean—and the exhibition’s implicit defense of this imagery—requires a glance at unfavorable stereotypes associated with them. Prior to contemporary ecofeminist critiques that reclaimed femininity from patriarchal botanical metaphors, classification systems have often applied and instituted the gender binary and assignments of femininity to nature.4 As a result, floral associations often carry perceptions that mutually devalue emotions, nature, and women. In quotidian use, flowers are often deemed to be romantic objects expressing emotions ranging from happiness to grief. Nikki Giovanni has defended flowers and their emotionality by elevating them beyond normative perceptions, arguing that they are not only additive pleasures, but can relay other intricate intimacies that words fail to transmit.

If Giovanni has nudged us toward reconsidering these floral beings, Kawinzi asserts the multiple values that flowers may invoke. However ephemeral, flowers are significant not only for their beauty in a state of full bloom, but for their transformations over time.5 Attention to flowers reveals a sensitivity and openness to the world around us, and can stimulate our awareness of being alive. When viewed as a single installation, River City presents a vista that functions as an embodied site where a cocktail of emotions can occur. By integrating the life-giving symbology of flowers with gestures of one hand holding or two palms clasping, the photographs reconstitute the image of Blackness away from its negative, racialized connotations. The Black body, en masse, is rendered tenderly and tender, allowed a rich palette of all it might mean to be human.

Poetics are also expressed through the works’ haptic materiality. In Blue Mantra (2021), blue threads are assembled and knotted with cowries—the thickness and length of thread vary, even as they are evidently connected. As materials, threads are delicate yet malleable; may be taken apart or woven together. In this work, the blue threads exert a sense of presence, evoking the exhibition’s overarching relationship of strength and fragility, and the chromatic undercurrent of blue(s) as a sign referencing the African-American blues tradition. In Western popular culture, Blackness is rife with projections of resilience, as seen in the trope of the “Strong Black Woman” or the representations of African American men in the post-Civil Rights era.6 Such objectifications dehumanize even when intended as celebratory. Blue Mantra recasts such prevailing notions of Black strength, by locating single lines of thread within a network. The support of fragility by other threads indicate an openness to compassion and community even in melancholia—in this way, the networks demonstrate how vulnerability is in fact a rightful state of being.

The exhibition’s poetics triangulate flowers, softness/vulnerability, and Blackness—this ensemble calls to mind bell hooks’ inquiry into the question of a Black aesthetic. Charting a discourse through her memory of childhood in living spaces, social spaces and her engagement with the Black Arts Movement, hooks reaches a conclusion that is non-reductive and expansive. She writes:

Remembering the houses of my childhood, I see how deeply my concern with aesthetics was shaped by black women who were fashioning an aesthetic of being, struggling to create an oppositional world view for their children, working with space to make it liveable. She did not inherit her contemplative preoccupation with aesthetics from a white western literary tradition […] We must not deny the way aesthetics serves as the foundation for emerging visions.7

hooks’ definition offers aesthetics as crucial modes of perceiving and becoming, and foregrounds phenomenological considerations through ways of dwelling in space—including social spaces of relation and inhabitation. What it has meant to grow up in a Black household, to be mothered by a Black woman, to navigate the world and art-making as a Black artist, is ennobled by the poetics of Soft is Strong, across its fragmented parts: a craft of the blues, voices from the South, tactile transferences of nurture-consciousness from one’s foremothers.

In a social landscape laden with numerous tools of oppression, resistance often comes in the form of making visible one’s own contract of freedom. When Kawinzi contemplates their liberation in the space of poetics, they affirm it as “a place where things don’t have to have the same kind of logic imposed in external spaces—things can have their own internal logic of freedom.” Freedom as an internal and continuous assertion also trickles outwards and externally, in the way we gift softness to the social spheres we inhabit. Softness is pleasurable, as it ensures a depth of life attuned to a sensuality that we might understand by way of James Baldwin’s words—“to be sensual is to respect and rejoice in the force of life, of life itself, and to be present in all that one does, from the effort of loving to the breaking of bread.”8

For more equitable worlds, could we conceive of softness and its sensualities as a universal right particularly for a discourse of Blackness whose prevailing definitions in mass culture prohibit it? At a time of ongoing brutality against Black lives worldwide, staying soft is bound to the necessity of continued demands for the liberation of the oppressed.Through the exhibition’s spatial poetics, the viewer is reminded that staying soft is an oppositional force to the negative constructions of vulnerability as a sign of weakness. To be soft, to deliberately instill softness, offers a spot of respite and alternative ways of survival, reckoning and healing.

This essay was originally published by CUE Art Foundation for Miatta Kawinzi’s Soft is Strong. 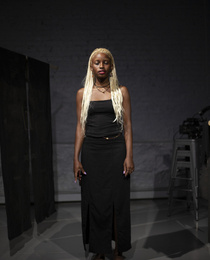 Born of Olúfemi & Olúyemisí, Adéolá Olákìítán is a trans*themme poet, artist and curator living and working in spirals & reversals. With past experience in global contemporary art, art & politics and new media practices, their current research (and dream work) is committed to creating errant, vital imaginaries and systems of relation. Olakiitan holds an MA from the Curatorial Practice Program at the School of Visual Arts. Qra33 is their transversal studiolab designing projects and spaces of critical nuance and play. They are the author of the collection of lyric essays and poems, Whiskery Squid.