Once Again I Fall Into My Family Grave:
Winner of the 2021 Barthelme Prize

In my blood, a continent. All the warring countries—almost reconciled. They breathe together as they weave through the marbleized muscle of my heart, taking their communion of oxygen, amen. My blood a Catholic mash-up. One long Mass in the mother-tongues of all my grandmothers, languages I pretended not to understand until I didn’t understand. In the playroom, in those years I still dreamed in other languages, presided the old trunk we called the War Room, packed by one grandmother’s family fleeing a country ridden with war.

Another grandmother’s country started that war. She stayed in that country until the war was over, and after. She was very hungry her entire life. Her hunger did not die with her but hungers still, unrelenting, long trauma of deprivation reverberating through her descendants, epigenetic echo of empty. Amen. As a child, I turned away when I walked into an empty kitchen and saw it was not empty, my bayonet-thin aunt in the pantry eating butter with a spoon she dipped in sugar. Eyes closed, lips slick with shook, shocked cream. Desire churned until it hardened and held a shape, then pressed into sticks, wrapped for sale, and bought. As a child, I knew the word sex but not what it was, and wondered if this might be it—the rhythm of her gulping throat looked so private. I left the room quiet as her spoon sinking into butter.

This family inheritance of debt translates differently across genders, across bodies. An uncle I loved grew large on loud calories, his daily breakfast a cold Coke, half a pie, two cigarettes. His truck’s glove compartment a graveyard of packaging, discarded sugar-smeared cellophane of the Hostess Donettes he popped easy as mints. Takes out the bad taste, he said. What was that taste? I never asked. I looked away from the litter of his stuffed and shouting hunger whenever it announced itself from his pockets, his Chevy truck. I did not want to see. I was ashamed of my shame, the noise, the waste—all that plastic, crackling and empty. He died in a diabetic’s hard increments.

My aunt is still alive, and thus still hungry. She does not keep butter in her house. At dinner, she moves food from country to country on some invisible geography of her plate. Making a map of denial, she says I could not eat another bite. During the war, my great-grandmother stole communion wafers and fed them to her children. Consecrated or unconsecrated? someone asked once—as though the story itself had not already answered that question. My ancestors listening from their cathedrals of war and flight, my American-ransomed heart. 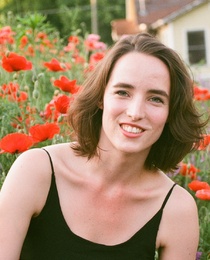 Sophia Stid is a writer from California. She is the Ecotone Postgraduate Fellow at UNC Wilmington, where she teaches creative writing and serves as an associate editor for Ecotone. She received her MFA in poetry from Vanderbilt University. Her micro-chapbook, Whistler’s Mother: An Essay, is out now in the INCH series from Bull City Press.