I love comic books. I used to follow years of adventures. Superman. Spiderman. The Fantastic Four. I wanted to be Storm. I wanted to be Batman. I held no real allegiance to DC or Marvel. I sought out comics by independent artists as well. Early copies of Too Much Coffee Man (that most relatable of Superheroes) were hoarded. Honestly, in my forties, I waited two years for the omnibus of Too Much Coffee Man. But, what I loved most, what I wanted to plumb, were the origin stories. I’d usually pick up a random comic (always seeking new ones) and come upon the heroes or villains or citizens of a metropolis, in medias res: researching, reading the paper, moonstruck, or fighting for their lives or the lives of others. But I wanted to know what event or series of events led them to the place where I found them. The mysterious road to becoming. What or who so impacted them that they would don a mask? Who were they before the mask? The authors of the stories receded into the background, and I rarely wondered about the life of the originators, the authors. The stories were so alive to me, no matter how outlandish, that I craved the backstory within the story.

While I was looking at the larger world building alone, also sought out were those rooms the characters found themselves in growing up that made them tic or so ticked them off they would devote their lives to justice or revenge or disclosure. Many didn’t know their own histories as they were hidden or the information destroyed. They committed themselves to discovering the truth. Certainly, we can admit cultural parallels even if we aren’t from another planet. There are the mythologies these stories (humorous, campy, harrowing, earnest) make in total, but I am more interested in the personal mythology, the singular creation myth within the whole as well as where it connects collectively. This is often how I read poetry as well. What are our personal narratives? Where do those personal narratives and the narratives of our speakers meet? Early in my own writing, after reading an essay by Dianne Wakowski on building personal mythologies, I moved one step further away from the cold facts of the literal and into the heat of the literary, that bounding site of imagination, as it moved the work of writer after writer through my life. In writing this, for the first time I find myself wondering if it was really those early comics that led me to writing. What do my speakers say, particularly in my persona poems, that I won’t allow myself to say? What am I fighting for? Which rooms, like the frames on those thin pages, made me?

The speakers that inhabit our work take on lives of their own. Their origin stories are inextricably tied to but not necessarily ours. Unlike a series of stories that may be spread over weekly or monthly installments, a poem may rest within a book and another book may follow that does not connect necessarily narratively to the book before. Within even themed books a poem may only tangentially be tied to the poem next to it. We don’t usually think of a story being built or expounded upon poetry book by poetry book. In poetry we may not think of a “story” arc at all. We can go so far as to deny any narrative impulse in our lyrics, and some deride the narrative altogether (all of that potential meaning spilling all over the place). I’m being sarcastic, because I read story everywhere and find it difficult to not read it whether the intent is mine or the author’s. Short contemporary prose may act in much the same way, although more often than not it allows and it is expected that there will be a narrative nod at the least. Hybrid work shakes all of this up, but I am not speaking of that. I am making a case for the power of story and the beginnings that set the foundations or footpaths for said story. And considering of “origin” broadly. Understanding another’s origin lends me the courage to consider my own. Ideas of creation in the fictive gives us permission to both create and reinvent our speakers and consequentially, ourselves. Mythology may empower our speakers with a largess of self the cult of humility seldom allows.

I have gathered here are a few voices I’d like to offer contemplating the origin story. Some of these writers have been writing in the localized dark for some time. Some are emergent writers. Others well known. All are writing work that I found moving and hope you, like me, will sit in a good chair with a favorite snack and read and dream and remember the earnest moments of capes made out of sheets and youthful manifestos declaring who you would one day be or your early indignation at finding the world unlike the way you believed it should be. In these pieces you may find mirroring and escape. To paraphrase Bolaño, whether we admit it or not, there is a secret story we share. 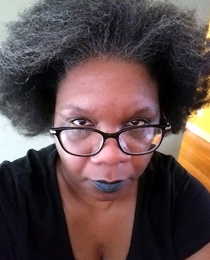 Vievee Francis is the author of three books of poetry: Blue-Tail Fly, Horse in the Dark (winner of the Cave Canem Northwestern University Poetry Prize for a second collection), and Forest Primeval (winner of the Hurston Wright Legacy Award and the 2017 Kingsley-Tufts Poetry Award). Her work has appeared in numerous print and online journals, textbooks, and anthologies, including Poetry, Best American Poetry 2010, 2014, 2017, 2019, and Angels of Ascent: A Norton Anthology of Contemporary American Poetry. Her new collection, The Shared World, is forthcoming from Northwestern University Press.