You’re sore. It’s your shoulders mostly—they hurt from swiping through hundreds of men. Tylers, Johns. Think about sending a message. Then, think about a massage. You have health insurance but you aren’t sure if you’ll keep the job it came with. Staying in one place is something you’re working on the way the men you date do with their stomach muscles.

“Beautiful,” the masseuse says on the phone when you mention the insurance.

“Thank you,” you say, because you take compliments where you can find them. Then, hang up and keep looking. Chat with an Alec, a Greg, a few Bens. That’s at first. At last, you sleep with a Sean.

“Maybe we could be platonic,” he tells you three dates later, two dates late. The word sounds like a bitter cocktail, one you don’t want. Buy wine instead. The cashier has the kind of face you can tell looks better in photos. Picture the two of you in one, as a couple, hands locked together like the teeth of a zipper.

“How are you liking this coast?” he asks. Speaking of coasts, put the brakes on. It wouldn’t work. Zippers are easy to undo. You undo zippers all the time. You undo your zipper quickly, before the masseuse tells you to.

“Slow down,” she says, and asks what brought you in. Tell her about your plan to heal through the power of the human touch.

You want to feel on. You want someone to turn you that way. She kneads you like bread. You wish you were baked. You’ve stopped smoking pot in order to be someone who doesn’t smoke pot.

“Where do you hold your tension?” she asks. Tell her it’s in your shoulders. This you know. This, you can feel.

She moves your body around inside your skin, digging into the twisted parts of you. At your hips, you feel a sharpness and tighten.

She presses hard into your hips again.

Afterwards, use the bathroom. You’re surprised by the graffiti. People are inspirational. People are angry. People are wanting to eat pussy and believing in God. Above the toilet paper roll: do something today that makes you feel like yourself.

When you go to wash up, shut the light off so the mirror can’t show you your face. In the dark, stick your fingers under the water and slide the soap between them. It’s a familiar sensation—skin on skin, hands touching for the length of a breath before slipping past one another. Wonder if this is enough. 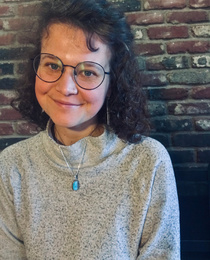 Kieran Mundy's work has appeared in Joyland and Hobart, and has been recognized in Wigleaf's Top 50 Very Short Fictions of 2017 and 2019. She holds an MFA in Fiction from the University of Oregon and has received funding for her writing from the Vermont Studio Center. She currently lives in Bend, Oregon where she works as a wilderness therapy field guide.