How It Was for Walt Whitman:
Winner of the 2019 Barthelme Prize

In the decades that constituted my formal education I came here as a way of getting wild again. The idea was to be reminded each day how unlike mine is the life of a heron, egret, one of those birds. I called it posturing, the militant dreamlife I lived here alone with drinking and gratitude and dancing at night in the kitchen with my mother’s ghost. In the year before I went west again I awoke here every next day to find the house occupied by some skeleton of a serious animal—a better man a family name—and in the winter months no poetry occurred to me but the sound of the oven steadying off at a certain temperature. There were twilights when in the trees I’d see a beauty so great I was unsure whether to wrestle with it or to weep, for I was at once struck-down in love and also very lonesome and I thought this must be how it was for Walt Whitman on Long Island. All season it seemed my hand reached out and out for something to steady me but brother I was knocked down, and what can you say when you know that to name a thing is to do it such damage? I can say at least that each of us is made by a process of dilution, each a petering-out of our father’s brighter lights; that there are towns which will ask you to live in them as you drive through and to allow yourself to be changed by this must be some version of a baptism. I can say this hill will be dark within the hour now; that there is good in the world, yes—some unending unblinking amount—and tonight like the night before we will hear the baying, faintly, of wild dogs from across the marsh. It is spring. 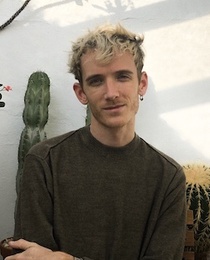 Bennet Bergman is a poet. His work has appeared in Threepenny Review and Electric Literature. He’s currently completing an MFA at the University of Iowa Writers’ Workshop.