Alice B. Toklas’s “Coconut Marmalade” recipe comes to us courtesy of the French poet and critic Stéphane Mallarmé, who describes the syrupy concoction as a “delicate dainty.” The “Coconut Marmalade” recipe appears in the Alice B. Toklas Cook Book, which was first published in 1954. Boil two cups of sugar and one-half cup of water in a copper kettle until it comes to a little pearl; then add grated coconut to the mixture, stirring with a wooden spatula. After fifteen minutes, add two eggs to another kettle. Then add the coconut mixture to the eggs, stirring the marmalade in the same direction. Remove from heat and flavor with vanilla, cinnamon, or orange-flower water, and then return to the fire, stirring for another five minutes. After letting the marmalade cool for five minutes, pour into a compotier (fruit dish) and serve cold.

Although Toklas refers to Mallarmé’s Marmalade as incomparable, her recipe differs from the length of time he suggests for cooking the syrup. She prefers a shorter duration, adding that her dessert was already an “excellent candy resembling a Chinese sweet long before it was time to add the yolks of the eggs.” Nevertheless, Toklas’s Cook Book was published with untested, unproved recipes that have ruined dinner parties, even when practiced faithfully according to her instructions. Like a good story, a recipe needs a recommendation, a context, a point, a reason to be. Far from being a strictly applied science of formulas, Toklas’s Cook Book had become her “reason to be,” a context, a point, and a story about the life she lived and shared with her partner, Gertrude Stein, and many other recipients of her culinary gifts.

Toklas contemplates the geographic origins of coconuts when she describes them as being the principal ingredient from island coasts. She admits that anyone who has bought a coconut does not know what to do with it and attributes this to her Parisian identity, saying, “For Parisians this classic fruit from afar, amongst the pomegranates or oranges and pineapples, remains a useless curiosity.” Despite this so-called uselessness, Toklas finds another use for a similar rendition of the Mallarmé marmalade in what she calls, “Coco Marmalade,” which involves pouring the coconut mixture over cream and a pie crust. In fond remembrance, she recollects, “It is still one of our favourite tarts.” The coconut takes on the mysterious qualities of tropical exotic biota from afar, and yet its fruity otherness finds its way into Parisian appetites in its full, delicate daintiness.

The Puerto Rican artist Francisco Manuel Oller y Cestero spent the first years of his career in Paris, 1858–65, followed by several subsequent trips that he made between Europe and Puerto Rico. In addition to his classical training in Madrid, Oller’s work was influenced at various times by several artistic movements, a fusion of Realism, Impressionism, Naturalism, Neo-Impressionism, and Symbolism. He developed a life-long friendship with Paul Cézanne and fellow Caribbean Impressionist artist, Camille Pissarro, his closest friend in Paris, who was from the island of St. Thomas. Later in his career, Oller founded several art schools in Puerto Rico and admitted as students many women and people of color (including former slaves) from a variety of social and economic backgrounds—an uncommon occurrence at the time.

Oller’s Still Life with Coconuts, circa 1893, was featured as the signature image for the Brooklyn Museum exhibition Impressionism and the Caribbean: Francisco Oller and His Transatlantic World (October 2015–January 2016.) Gracing the cover of all of the exhibition’s promotional materials are the still life’s verdant coconuts dramatically staged atop a wooden table. The entrance hall of Impressionism and the Caribbean featured only two paintings, hung side by side, with the introductory wall text: Oller’s Self-Portrait (1889–1892) on the left and Still Life with Coconuts on the right. 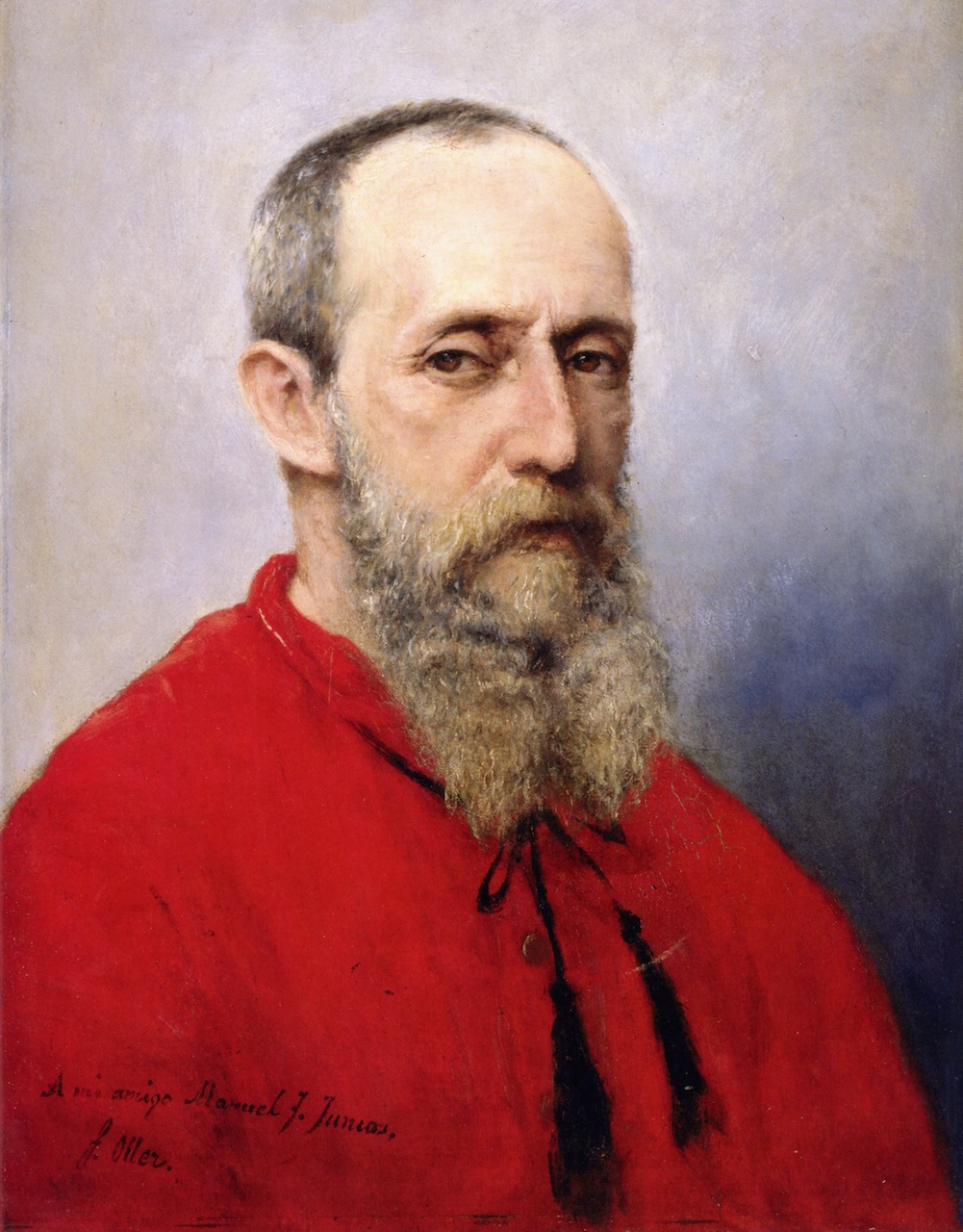 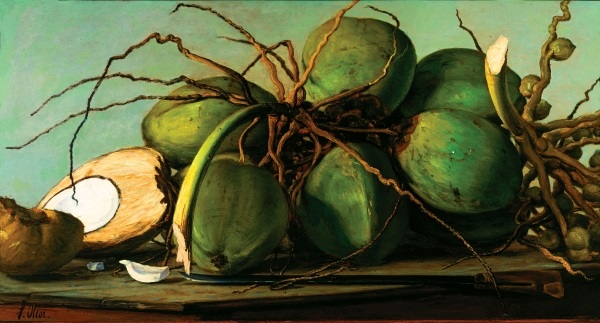 Oller’s Coconuts features eight freshly picked, green coconuts interlaced with spiny stalks still attached to their fruits and extending throughout the flattened picture plane. One coconut on the far left has been cut in half, revealing its milky center, and its sweet coconut meat has begun to be carved out as a smaller slice of white coconut meat sits temptingly close to the table’s edge. This particular technique of displaying a fruit cut in half, satisfying curiosity about its interior, follows a traditional tableau of representing the New World’s agricultural bounty. Yet, despite the bountiful offering of these fleshy coconuts, an aura of mysterious uncertainty and wild abandon taints the atmosphere as if nature has reclaimed its fruits and dares the viewer to taste from its table.

The spindly stalks creep out from the nexus of the composition like arachnid extremities. The pronounced compression of space pushes the roughly hewn roots into the forefront for the beholder’s contemplation. The sharp points and scraggly edges of the root system prevent easy entrance into the scene. Oller creates a kind of coconut Noli me tangere: we may look, but not touch. The unruly roots create an organic blockade around the coconuts. In addition to the possessive tendrils, Oller has added another treacherous barrier to the fruits by placing a long, wood-handled machete on the edge of the table with its sharp blade facing the viewer. Due to the optical rhythms of the wooden handle of the machete and the wood grain of the table, the handle of the camouflaged knife blends in with the board deceiving the eye. The unassuming machete is placed in a way that is rendered precarious because its handle teeters off the edge of the table, taunting the balance between handle and blade and the balance between visual consumption and inaccessible fruits. The somewhat concealed weapon, possibly used to cut down the coconuts, is seldom mentioned in the literature on this work because of the knife’s obscured appearance and the optical insistence of the green, fleshy coconuts.

Oller’s career offers a paradigmatic model of a globalized art history and the flexibility and mobility of an artist who exceeded the boundedness of island spaces and yet returned to an island space as his homestead. Due to artistic differences, his friendships with Pissarro and Cézanne deteriorated later in his life. Perhaps, these stresses contributed to Oller’s career disappointments and fractured artistic identity. This is one of the reasons why I have described Coconuts as self-referential. I believe the flattened picture plane is not just an artistic device that communicates the “pictorial urgency” of the composition, but may also represent a flattened uprootedness communicating a kind of “existential urgency” of a man seeking the reconciliation of his artistic self-identity. Oller’s Coconuts draws attention to the free-floating movement of the rooted structure as an expression of boundless energy that celebrates its own islandness without the literal rootedness in island habitation. The coconut roots are their own voyaging subject.

I believe the iconicity and self-referential nature of Coconuts are some of the reasons it was chosen to be the “face” of the exhibition, especially given that coconuts possess a long history as anthropomorphic “faces” in art history. Thinking about Coconuts as a self-portrait allows us to consider the uses of coconuts today, not in a “Coco Marmalade” recipe, but as a main ingredient found in popular beauty products. The correlative relationship between coconuts and the skin is evidenced quite literally in their high antioxidant content, which protects skin cells. Its vitamin C-rich content expedites wound healing through the stimulation of collagen production and assists in strengthening connective tissue. Coconut milk is used as a remedy for sunburned skin, reducing redness and inflammation, and coconut oil’s cosmetic uses are too numerous to include here. In short, the connection between coconuts and the skin can be explored both through their nutritive relationship with the body and metaphorically as a tropical island signifier. I am imagining the coconut here as a reductive symbol of the island’s skin and as a marker of Oller’s routed identity.

Coconuts, like Oller’s career, was free-floating in the world through networks of friendship, artistic exchange, and the literal network of branches we find in the painting. In Coconuts, we discover a protagonist in the life of an artist negotiating a Caribbean identity. Recipes are living things, works in progress. The cobbling of time, techniques, and ingredients is one of the culinary liberties yielding delicious discoveries. It is hard to imagine Oller’s green coconuts in one of Toklas’s “Coconut Marmalades” flavored with vanilla, cinnamon, or orange-flower water or becoming anyone’s favorite tart. Oller’s verdant subjects seem to yield neither to kettle nor to compotier. Like a good recipe, Oller’s Coconuts provides a context and reflects his “reason to be.”

Tashima Thomas is a gastronome, cultural critic, and art historian specializing in the art of the African Diaspora in the Americas. Her work focuses on food pathways, materiality, commodity fetishism, and the consumption of culture. She is currently a Visiting Assistant Professor at Pratt Institute.