Playing in the Institute:
On Tag at ICA Philadelphia 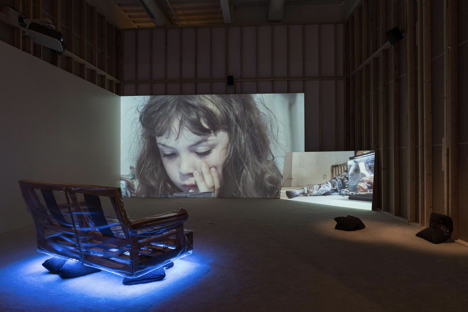 Growing up, I played in chat rooms and online worlds. The video games I played projected body control onto a variety of virtual avatars. That virtual body was shared, anonymous, liquid, and blurred against the identity attached to it. At some point, those video games began to include options to “design your character,” full-featured interfaces for manipulating an avatar into a new representation of self, a virtual body that was fully mutable. But the projection into virtual, constructed worlds seemed less important than the ability to virtually connect one constructed subjectivity with another. I connected with strangers hundreds of miles away in the unfinished basement in Ohio from which I logged on late at night. For me, these platforms for play came before my access to a language that might contextualize those impulses and freedoms. Both online and off, they were the first places where I encountered what is entrenched in history as “sexual deviance,” but what has also been called love, navigation, or play.

Tag: Proposals on Queer Play and the Ways Forward, organized by Nayland Blake, is a survey of artists working within these intersecting realms of indeterminacy, play, and erotics. Filling five rooms of ICA Philadelphia, the show takes on the genre of the “queer exhibition” in a way that feels intentional in comparison to some similarly themed surveys in recent years. At the edge of this curatorial thread, specifically, is an emphasis on engaging with works that are themselves operating through queer dynamics, rather than functioning purely for the isolation of signifiers and images of a queer culture that remains sequestered outside of the gallery. While the participants in Tag are certainly queer and its contents certainly include depictions of queer bodies, the works in the show are joined by their insistence on emphasizing queer dynamics rather than simply connecting the queer identity of their makers or subjects. 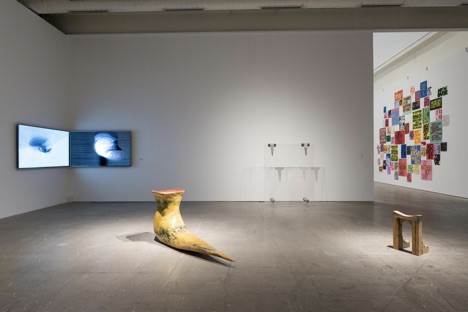 One example includes the works of Savannah Knoop, who offers two wooden sculptures (titled Quadriped Harness and Rocking Tail 1) adjacent to a more minimal work made of clear acrylic and oversized tractor hardware titled Ball Crusher. The wooden sculptures tangibly feel as if they interface with the body: a large tail-shaped piece highlights a perfect butt mold for sitting and implies its use as prosthetic, while the other low, simple structure becomes a harness of sorts, gesturing through its construction an expectation of restraint and staged as a tool for topping its participant. Similar dynamics between audience and object are found in Arnold J. Kemp’s arrangement titled When Will My Love Be Right. Multiple leather belts lay neatly draped over a low, galvanized steel shape with top and bottom shelf, mixing aesthetics of the clinical and the personal. Large buckles whisper in all-caps, SHY, and the audience experiences references to both the body that wears them as well as that body’s ability to signal within social spaces.

Tommy Bruce’s work, on the other hand, is purely representative. Seven photos depict intimate time spent within the world of furry fandom. The bodies in these images exaggerate their proximity to the avatar, as participants in the culture invest in finely-crafted suits of anthropomorphized animal characters representing each wearer’s fursona. Perhaps functioning similarly is K8 Hardy’s Outfitumentary, a casual but disciplined documentation of outfits worn between 2001 and 2012, clocking in at 82 minutes and depicting a decade of decisions for daily presentation and framing of the body.

Other works operate somewhere in between the situational and representational. An installation by AK Burns includes a centrally-installed couch, stripped and reupholstered with clear vinyl against its skeleton to reveal blue LEDs glowing from below, while a fragmented video install documents a surreal play of actions and conversations that emphasize the quotidian body’s relationship with other objects. In the adjacent room, Robert Yang’s three video games included under the title Radiator 2 highlight one which functions as a playful didactic measure for demystifying the process of a BDSM relationship. Here, the actual process of spanking and impact-play, a semi-theatrical space which can be activated and deactivated with safe words, is a relatively short instance that is bookended by the more involved negotiation and aftercare processes supporting that space. 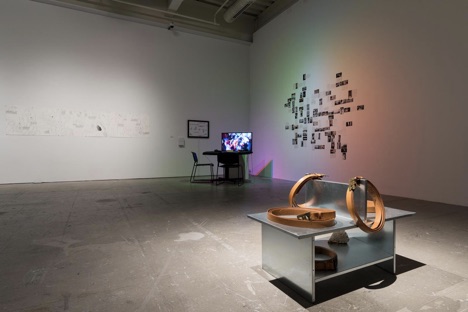 Because of this relation with the disregarded, disempowered, and marginalized, there’s an inherent danger in curation of “the queer exhibition”; flirting with the hegemony of the canon is a bad look, but proposing possibilities is cute. One of the oldest works in Tag is a colorful, campy sculpture by Larry Mantello titled Corner Stitch that is distinct from the exhibition’s framework as a response to queer bodies and queer love “through new technology and sensibilities of play.” Rather, it becomes a proposal for where this energy finds root. The thin, transparent opulence of camp sensibility functions as a cornerstone to queer play here, where camp acts as an early foundation for play within twentieth-century gay and lesbian communities. The possibility of a loose continuity here leaves room to breathe. 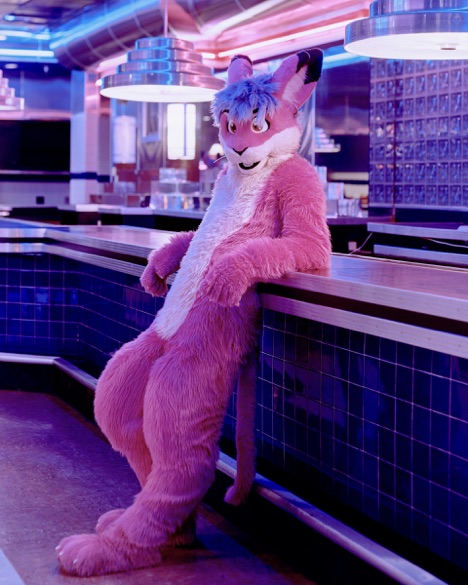 Queer play indicates continuous becoming. Rules shift, bodies shift, boundaries shift. The success of Tag lies in its emphasis on functioning through these dynamics rather than about these dynamics. Instead of relying on a more rigidly navigated survey of depictive works in what is already an identity-based exhibition, the modes of engagement between each included artist fluidly transition from situational to propositional to representational to didactic and beyond. It’s still a question of how queer exhibitions can function within certain institutions without assimilating, without petrifying living works in order to propose additions to “the” hegemonic canon, but Tag proposes ways forward that walk indeterminacy with confidence.