Oh, the pretty boys. All the pretty boys. They smirk and follow you down the corridor to class. They pinch your bum, squeeze your breasts, and when you shriek Arseholes and try to knee their balls, they double over howling with laughter and pretense. You get sent to the Headmaster’s office, who calls your parents. Instead of Good on you, your parents apologise to the Headmaster and the little shit’s parents for your profanity and violence. Later, when the detention teacher steps out to take a call from her boyfriend, the P.E. teacher, one pretty boy slides close enough to fumble his hand under your short skirt and hook his grubby fingers in the leg of your pants. You squirm, he smirks. If you giggle enough, they send you notes with stupid song quotes and invitations to meet at the underpass by the bus shelter after football practice. You smile at their silly lyrics and later don’t slap away their hands during break time but agree to meet because you want the warmth of their wet mouths and the press of their awkward bodies. Mouths that swear they’ll love you forever as they eat away your cherry-bite lip gloss, furious to cop a feel of your new sprung tits and rub their hard, little mongrels against your groin.

Their forever never lasts that long. Gone by Christmas.

Oh, the pretty boys. All the pretty boys. They buy you coffees at the campus Costa, spend afternoons pretending to love the poetry of Dylan Thomas and take artistic photographs of you in the park. Romance done, nights at the student union bar, they line up vodka shots, count you down cheering and laughing before slobbering over your amazing tits, tits in their prime. Outside in the alleyway behind the toilets, they slam you hard and fast without a condom and take a few more photos. They never do give you the photos, and they never remember your face.

Oh, the pretty boys. All the pretty boys. Spending their overtime on bespoke suits and BMWs. They tell you everyone meets up at the club on Friday nights. They buy you sharp champagne and vodka sledgehammers (yes vodka, you never learned your lesson) and share lines with you, and you with their friends. Friends who take great photographs of you bent over the outside bins, pants down, legs spread. Monday in the office, they promise to give you the photos if you beg—on your knees. Not once, not twice, but three times you get on your knees. They enjoy your pleading, but they want more. You give them everything they want. And afterwards, you throw up not once, not twice, but three times in the bathroom. You never get those photos.

Oh, the pretty boys. All the pretty boys. Until you miss two periods. One pretty boy swears to love you forever and the wedding-cake dress hides your tummy. On the honeymoon in Morocco, you spend your days puking in the beautiful bathroom with the expensive complimentary toiletries while your new pretty husband goes snorkelling on charter boats filled with bikini bodies. Too soon the baby comes but not soon enough because you vomit all nine months, and nothing prepared you for the post-natal exhaustion nor your husband’s disgust when his son suckles where once he sucked.

Oh, the pretty boys. All the pretty boys. Over the next couple of years your pretty husband piledrives two more kids into you. He joins his colleagues (once yours) for Friday night drinks and corporate paintballing weekends and flights to stag weekends in Amsterdam, Prague, and Hamburg, leaving you with the kids, their piano lessons, swimming lessons and parents’ evenings. God, you’re so bored. When his best mate corners you at the company summer barbeque behind the bouncy castle, he shows you those old photos on his phone, taken way back then, and tells you he might just put them out there—on Twitter, on Facebook, on Instagram. You meet him in a business motel near the M25 when the kids are in school and let him do unspeakable things to you. You drive home, relieved he didn’t promise to love you forever. He never does give you the photos.

Not that time or the others but it doesn’t matter because by then your husband is long gone taking with him his tempting receptionist with suckable breasts and sun-streaked hair.

Oh, the pretty boys. All the pretty boys. The pretty football coach at practice eyes you up. He’s impressed how often you turn up and tells you how the Big C is killing his wife, has killed his marriage. Later in the changing rooms, it is good to feel the warmth of his mouth swearing he’ll love you forever as you unzip his jeans. He kisses off your Chanel Insolent Plum lipstick and fumbles under your jumper for your hard nipples.

His forever lasts longer than most, until the end of term. Until after the funeral.

Oh, the pretty boys. All the pretty boys. They come home with your daughter on long weekends from uni, and nothing has prepared them for their girlfriend’s mum. When she goes to town to catch up with her old classmates, you, the older woman (when the hell did you get old?) make up for what you lack in the subliminal attraction of full-blown evolutionary, pro-creative hormones with a Jesus fuck me experience and prove to yourself and them that you are still young enough to be dangerous. Their frisson of dumb luck has the pretty boys grinning like village idiots at dinner when your second not-so-pretty husband pours wine. They blanch then burn and smother embarrassment when as he carves the chicken, says Are you a breast or a leg man?

Oh, the pretty boys. All the pretty boys. You sip your Massimo decaf cappuccino and watch them strut the Mall. In Costa Coffee, you no longer catch their fifteen, twenty, forty-year-old eyes. They see only the barista babe with black eyeliner, the schoolgirl who’s hitched her uniform above her non-regulation knees, and the yummy mummies with still perky breasts and child-bearing hips. No one told you your hormones take you with them when they go. You are now officially unfuckalicious, invisible.

Oh, the pretty boys. All the pretty boys. No one takes your photograph anymore. You hate when they hold the door for you, not to eye your goods but because you’re old. You try to remember, to recall their heat, their urgency, their need and yours—but your memories are buckled negatives of the photographs they’ve taken, the ones you’ve never owned.

And the truth that forever doesn’t last. 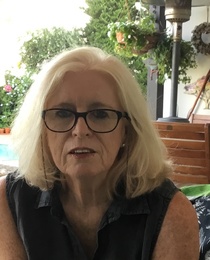 Shannon Savvas, is a New Zealand writer who divides her life and heart between New Zealand, England and Cyprus. She has been published widely, and has been longlisted, shortlisted and commended in several competitions. Find her online at www.shannonsavvas.com.