Other sailor nationals preferred
death to eating the spawn of demon-witch-whores,
but when the Spanish sailors raided the potato stores
Columbus carried back, they avoided scurvy.
You have to start somewhere, and this will do,
since history was created to explain you.
(Columbus's voyage—to add to the mix—
was underwritten by a Spanish salt tax).

I'd wanted, in this way, to document
that two hundred varieties once grew in Peru
and the Incan Empire created the method
of freeze drying by stamping their moisture out,
exposing them to sun, these chuño, and letting
them freeze and thaw, then stamping them again.
That's how Mrs. Orsak's flabby arms came to plop
eventually, a reconstituted spoon of potato pulp

on the square slot of my cafeteria tray—
at 45 cents a subsidized lunch in Texas, 1979.
The potato flakes retain the shine, when shaken
from their box, of the winter Andean skies,
under whose supervision freeze drying was begun.
Sublime Incan utensils formed from native
clay had eyes, and growing from the eye-threads,
roots, and from the roots the heads of gods.

They may be viewed in Lima's Museo Larco
in subterranean store rooms, loose along
the shelves, among the agile os and tongues
of ceramic corpulent couples, whose
flexibility of flesh and morals
caused many such pots to be smashed by conquerors,
who were "mortified," thus rendering this
collection "all the more important." Tonight the eyes

are cut. My father says to do it. He says
that you must cut and let the edges dry.
That if you plant when the cut edge is
moist, it will rot. I remember how we
used to store them in the sand under a house
raised on cement blocks in Texas. How once my
mother crawled beneath, edged her hand into the storage box,
and agitated a nest of baby rattlesnakes.

I don't remember her turning pale and sick,
I recall getting whipped with a leather belt
after crawling there myself. But then I did
not remember how we acquired seed
potatoes either. There were none available
in Tel Aviv last night, so I bought cooking spuds on Basel
street, wrapped in plastic, in oxidized
cardboard, not Styrofoam, and we cut the eyes,

and the indentions that look like eyes, gently
washing the black earth off, and scratching to see
what lay beneath. And saving some, too, to eat,
the parts clean shaven, no eyes. The dumb and
beautiful skin. Catherine the Great also forbade
the peasantry from growing potatoes, then had
potatoes planted on her land, up to the trees,
posted sentries instructed to accept bribery,

and that's how the potato spread across the
Ukraine. In a failed sonnet I once wrote:
Across the Ukraine, tea-stained, broken teeth
tore the flesh; hands pounded it to dough
and boiled it until it sank and slowly rose.
Frederick the Great threatened with knives the noses
and ears of the Irish to force them to plant.
And thus the ground was fertile for the famine.

Then three times a day for eight months, Antoine
Parmentier, French army pharmacist,
was fed only "hog's fodder" in a Prussian
prison. Later, in the gardens of Versailles
he gave Marie Antoinette a papery blossom.
The scene makes a pretty prelude to the appetizers,
soups, entrées, and desserts he composed
(200 of them) exclusively from potatoes.

King Louis XIV and Marie invited
nobility to dine. Since peasant
cooperation was the aim of this banquet,
peasants were forbidden by parliament
to cultivate potatoes. Parmentier planted
his behind a wall and instructed
his armed guards to accept every bribe,
and to gift potato blossom nosegays to each bride.

He was right, of course, and so were they;
the blossom is diminutive but pretty,
threaded through the hair, a saucy pink.
You wouldn't think
so, if you bought potatoes today,
on sale, as I did, standard shapes
as stout and straight and graded as a girl
who, half a century later, isn't beautiful,

although she can't believe it (you should know
she once was)—but once potatoes were gnarled
as this narrative, with shapes as uncontrolled
as the deities they embodied in their native world.
I bought mine in a red net with a gold
label depicting fries, pale as an old
day because—much time's elapsed since I began—
and classroom Hanukkah festivities demand

(he also improved sea biscuits).
At Montdidier, his bronze
statue surveys the Place
Parmentier from its high socle,
while below, in full marble relief,
seed potatoes are distributed
to a grateful peasant
as a present.

I'm roasting new potatoes in their jackets
this morning with sprigs of rosemary
torn from the neighbor's invasive phalanx
of a shrub, and salt from the local sea.
To be salted with the salt of the palace
is to be in the employ of a king:
and for five years I've been salted with the salary
of Tel Aviv. Sometimes I forget about the sea

that every evening swallows its pink balled sun
where the mouth of the Yarkon River joins the port,
while, on threads along the Park Hayarkon,
circus performers climb and spin and drop.
The river's mouth is probed by a cone
of light from Tel Kudadi, a Bronze-age fort
guarding this twist in the ancient Via Maris
in which I live, between Memphis and Damascus.

The rosemary, too, means dew of the sea,
from ros and mar, which explains why it won't
remain within my neighbor's garden boundaries,
though I strike with shears when it begins to choke
my (also native) greens. On every coastal
road the fragrance runs ahead; inland from the valley
of Gehenna to Jerusalem's walls which the Romans rent
till no two stones stood. Ascent's a scent.

What I like best about the Incas of Peru
was that they calculated time by how long it took
to roast a potato in fire. Who
knows how large the potato, how hot
the fire, if days were long and years were short then, too.
And here I am now, joining time and money through
roasting a potato in salt, the dew of earth
that can't contain itself, that's better than it's worth. 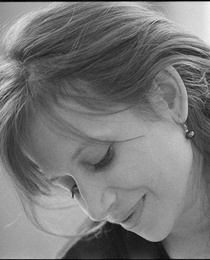 Marcela Sulak’s full-length poetry collections include Decency (2015) and Immigrant. She’s co-edited Family Resemblance: An Anthology and Exploration of 8 Hybrid Literary Genres. Her fourth book-length poetry translation, Twenty Girls to Envy Me. The Selected Poems of Orit Gidali (University of Texas Press) was longlisted for the 2017 PEN Award for Poetry in Translation. She hosts the TLV.1 radio podcast “Israel in Translation,” edits The Ilanot Review, and is Associate Professor of Literature at Bar-Ilan University