from a Chinese bakery.

A haggard woman considers the doughy stillborn bloating the table,
its body smooth & woundless as anything
that learned passing from the days.
The death she lives through
again to live through, but faster now:
her bent scalp foaming early silver
& sweat beneath a plastic cap
made bearable only
by a turquoise pin
softened with her daughter's shampoo.

Her dough-tipped fingers sparrow another pale moon into fullness as
a giant beast clouds the thicket of bamboo upon its back
with steam. Enough heat can turn a lake
into air, the sea into some memory
of having once held breath underwater.

& still she works, bone-sour under fluorescent,
without measuring bruised light for stillness.

If ever in a single sigh between her rising & the sun's echo,
still hours from seeing hands
that are not her own, should she cease
the frantic work of meating another creature
to vanish behind white teeth
& raise her eyes to the streets still puddled with night,
search the glass window's phantom for a room
without pork & chives steeped in soy sauce
or familiar alleys un-shattered by bottles
& clean of sticky piss,
the pavement absent of tourist footfalls & cigarette butts
& men seeking their first Asian bride & of course
a week's work for a day's wages—

may the moments plateau with quiet
as she raises her arms to wing another year.
Let her never return home to cake left
untouched from the child's birthday party.

Let her find in every photograph a sky
large enough to stand under.
Let her lift each bamboo steamer to reveal
a rain of perfectly-shaped 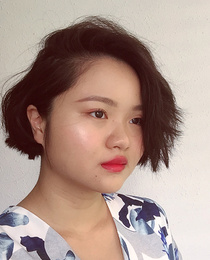 Natalie Wee is the author of Our Bodies & Other Fine Machines (Words Dance Publishing, 2016). Her work has been published or is forthcoming in Drunken Boat, Indiana Review, Prairie Schooner, The Adroit Journal, and more. She has been nominated for the Best of the Net Anthology and two Pushcart Prizes. Born in Singapore to Malaysian parents of Peranakan descent, she currently resides in Toronto.