Randall Tyrone and Anthony Sutton: Is there a larger Pinnochia sequence than what is published in Gulf Coast 25.1? Could you talk a little bit about where the idea for the sequence came from?

Lo Kwa Mei-en: There is one other poem in the sequence--"Pinnochia from Pleasure Island". I'd wanted to get down Pinnochia in some mundane and (supposedly) less sinister places, like at the beach or going to the movies and such, but was exhausted of her voice by "Pleasure Island."

I'd been kicking about the idea of a notably female Pinnochio for years; it was one way for me to think through worldly expectations of "real"-ness and the supposed rewards of attaining such a state of being. Pinnochia didn't become a fleshed-out (sorry) character for me until I found her voice, which was after I wrote "Pinnochia, We Loved You Enough". It just didn't seem right to "not" find a way for her to let them know what she thinks of all that.

RT & AS: In the three Pinnochia poems, it's interesting how the speaker moves between being Pinnochia and a group-consciousness "We." For instance: how "Pinnochia, we could not bear to see you / destructed even in our sleep. Pinnochia, you will never / die" brings the reader back to "Pinnochia On Fire." Can you tell us about the world you envision the Pinnochia sequence taking place in?

LKM: The world of the poems is home to wondrous individuals, communities, and collectives that eventually come into their power and act accordingly, be it by wrecking or surviving or spinning tales (lies) or telling the truth. In this world, violence begets violence, and the marks it leaves are not always plain to see. In this world, those who are considered to be sub- or inhuman carry the doubled weight of resisting their treatment as subhuman while simultaneously living and speaking their personhood, against the odds. Things might be a little more surface fantastic in this world than we are used to, but then again, the ("real") world's largest jellyfish is the size of a schoolbus.

In other words, the world of these poems could be read as rather similar to the "real" one. When I was writing these poems I did tend to imagine the environmental details in the context of a darkly saturated and alienated geography, just to keep the colors of the language focused, but from a remove I'd have to say that what makes Pinnochia's world different from any other is merely the eye of its beholder seeing terribly clearly.

RT & AS: Each of the Pinnochia poems has their own poetic forms and structures but all of them are a part of the same sequence. Could you talk about your ideas on the correlation between the varying forms of those poems and how they serve the lyric-narrative content of the poems?

LKM: For me, at least, it is not always possible to write in the quatrain, a room with its door in and its door out and quite a bit of delicate architecture to navigate between them. Nor in the single-stanza mode, since that kind of energy and follow-through requires both painful attentiveness and bawdy courage. I also think it is not always possible to write scary things down in another (made-up) person's voice, because who knows what you will conjure--but then again, poets do these things all the time. So maybe what these poems have in common in this regard is that they momentarily gave me the gift of the improbable within the context of my craft, if not the impossible.

RT & AS: Your poem, "Pinnochia on Fire" has a strong musical element in it. Could you talk about the process you go through when developing a poem so that it works sonically and whether or not you already have a vision for how the poem should be read or performed during the crafting process?

LKM: I'm a visual thinker, so when writing, there's no such thing to my brain as a line of poetry if I can't stare at it--it has to be physically written down for me to understand and build on its tones and rhythms and counterpoints. Maybe it's a musical training thing that I feel most in control of a sound if I can see its notated equivalent on the page, but at this point in my life the base physical properties of words and letters (curved vowels, an onslaught of straight lines in a row--these things correlate to syllabic sound for me) are a thing I lavish a lot of attention on. Sometimes that's a huge part of a poem's music for me. That said, I caught myself counting ascenders versus descenders in a poem's opening lines recently; I don't know if that's an "enough is enough" thing or not.

Other than obsessively reading word-by-word and line-by-line out loud during composition and being invested in the poem's aural affect, I have no conception of what the final piece might feel like when performed. I think I write under the delusional promise to myself that I will never have to read the piece out loud in front of people. I love the magic of a poet making music out of nothing but bare speech and written-down language but am always terrified of doing so myself.

Anthony Sutton is a Senior Editorial Assistant for Gulf Coast. He is a recent graduate from the University of Houston's Creative Writing program.

Randall Tyrone is a Senior Editorial Assistant for Gulf Coast. He is in his final semester as a creative writing major at the University of Houston. 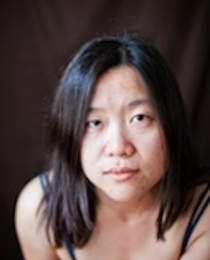 Lo Kwa Mei-en's poems have appeared or are forthcoming in Ninth Letter, Crazyhorse, Guernice, New Orleans Review, The Kenyon Review, and other journals. She won the 2012 Crazyhorse Lynda Hull Memorial Poetry Prize. Most recently from Columbus, Ohio, where she graduated from Ohio State University's MFA program, she currently lives and works in Austin, Texas.