Geetha Iyer, winner of the 2012 Gulf Coast Prize in Fiction, talks with Gulf Coast Senior Editorial Assistant Kim Vera about her writing process and her story “The Glass World-Builder”

Kim Vera: How do you usually start writing a story? Do you follow some sort of outline?

Geetha Iyer: I don’t usually think in terms of plot. It’s much more sensory—a haunting sound or an image. I write pages, sometimes of the same paragraph, until I find a voice that carries the sensory detail I want the story to explore. I’ve learned not to make outlines after that. Once the voice emerges it tells its own story, and I can’t really control it any more.

KV: When writing "The Glass-World Builder," did you always intend to have the story told through the eyes of an outside character?

GI: Yes, for somewhat unconnected reasons. I had been reading Roberto Bolaño’s Nazi Literature in the Americas. I loved the concept of the book—a collection of fictional biographies of contemptible literary figures—and was particularly fascinated by the voice of irony coasting under the surface, that of an omniscient outside-the-story/in-on-the-joke narrator. I wanted the challenge of writing something in that vein, an obituary or retrospective or museum pamphlet for a performance artist who “performed” acts of terror, something deadpan, entirely committed to its own reality while being completely absurd.

Of course Sarla’s story became its own thing as it was being written, and a much more personal voice emerged. And for me, personal voices are problematic. Most of the literature I read growing up and a fair deal of what I’ve studied at university is by white male British or American authors. I didn’t really understand the psychological impact of this until I started writing myself—I’d become so habituated to assuming that, unless otherwise specified, people in stories were straight white males of British or American extraction that my own characters always sounded more Sam than Sarla, unless I stated otherwise. It makes me feel self-conscious to have to label my characters as other-than-assumed—it leads to those awkward moments where the narrator staggers to the story-telling equivalent of a mirror and describes her skin color, body shape, and sexual preference to herself—and thus the reader. Writing through the eyes of an outside character allows me to displace the need to describe the obvious—that individuals self-define as normative even if the dominant culture sees otherwise. It moves my writing away from stories of character origins and identities to refocus on their doings instead.

KV: Was Sarla based on someone you know/knew in life, or a combination of different people?

GI: I have a picture of Sarla in my head that comes from photographs of a person I’ve never met, a friend of a friend. But she’s otherwise an invention. With that said, I write fiction because it lets me live vicariously. Sarla’s obsessions are my obsessions on overload. I am not a molecular biologist, nor a visual artist, but I once wanted to be both. I’m also not a practicing misanthrope, but I think Sarla’s feelings of disgust toward people is a mirrored reversal of my reverence for biota that are not human. Most of the organisms Sarla works with in her stories I’ve studied at some point myself. There really are fungi that squirt fruiting bodies out of wood like gel toothpaste. And nematodes are incredible—people talk about humans like they’re some evolutionary paragon but nematodes are so finely adapted to their surroundings that they literally suffuse the planet—you could take away everything else on earth but the nematodes and still be able to tell what the planet looked like—their bodies will mark out everything from the contours of the ocean floor to each knotted tree root in the soil.

KV: Discuss the title: throughout the story, Sarla works with glass in different ways. Did that contribute to your title choice or were there earlier titles you were thinking of using?

GI: I think the title was an afterthought, actually. Most of what Sarla sees is contained in glass or glass-like framework. Petri dishes, microscope, camera lenses, and airplane windows. The title was just a literalization of the story. I suppose if I hadn’t felt that glass also worked as a symbol, I might have changed the title.

KV:What drew you to start writing, and would you say that science helps fuel your ideas?

GI:When I was eighteen I decided to be a biologist instead of an artist because I thought it was a less self-serving career choice. I wrote as a way to keep in touch with an otherwise neglected need to be creative. I’ve since recognized that it was a mistake to abandon art making for science. I write now because I accept that what I do best is make things—world-build, I suppose—from raw materials. And words are the best raw materials, so abstract that their transformative potential is infinite.

I still love biology though. I’m not mathematically inclined but I find the natural world endlessly awe-inspiring and learn from it continually. I think of myself as a non-practicing biologist—I still have knowledge of fieldwork and lab work, but I draw different insights from these experiences than I would as a scientist. I use the same data to craft metaphoric truths instead of concrete ones. It's the best kind of inspiration.

Kim Vera is a Senior Editorial Assistant for Gulf Coast. She is currently majoring in English at the University of Houston. 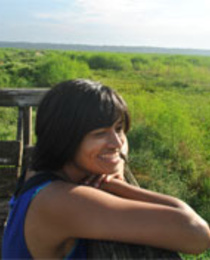 Geetha Iyer was born in India, grew up in the United Arab Emirates, and moved to the United States to study biology. She has since become an MFA student at Iowa State University's Creative Writing & Environment program. She writes fiction, nonfiction, and poetry with a bent toward place-based and science writing. She is a recipient of the Hopwood Undergraduate Short Fiction Award and the Robert F. Haugh Prize from the University of Michigan.