And then we decided it was time to go back
to the land; to Mother Earth and her brothers,
her angry uncles and her long-lost sisters,
back to the land like Crusoe, washed ashore,
watching bunched grapes shrivel in the sun;
This is where the wheel is broken at the cistern
and the weeds of dandelion rise to over six feet tall,
their star-shaped heads not yet in blossom.
We knew we were estranged from something
to which we somehow belonged. In consequence
our guides-men, Puzzled Cause and Plausible,
will lead us forth, the people of these tenements: he
who improvises tools to open waterworks; the hoarders
and the unofficial mayors and the aldermen;
those who tend feral cats in the trash-strewn gorges;
the vendors of radishes and the vendors of green ice;
keepers of the secret aviary; the men who repair
the gear-work of elevators, returning home
in grass-green uniforms, drunk and half asleep
under a system of stars called Swan;
smokers of cigars flavored with lavender;
those destroyed by radiance for cancers;
he that guides the giant freighters into port
or inspects a crate of green plantains for stinging
insects; the soldier envisioning a blue flare;
she who willingly sends her child
through the burnt-out grass to granite headlands;
those who observe the breeding habits of a thrush
through concave and cylinder glasses in the verdant
ruined theater; who tend the salt-fires
made from dried kelp gathered from the sea at high tide;
who cultivate the blue vervain and sweet alyssum;
the lathers and workers of an iron beam,
or who lays down a layer of coal-tar and slag;
the sellers of fireworks and amaryllis;
who writes a synopsis of the first partition;
who studies the peach-colored glaze on ancient crockery
or smokes mint tobacco while cutting the street with a diamond saw;
he who polishes an obelisk or polishes the windows
of a green prismatic tower. The glass and plaster rubble
hauled by the barge Buchanan Reverence flows into the sun
toward autumn. And though we begin in media res,
so do they, and everything else, for that matter.
The concrete structures of the state's planned housing
empty out, people walk into the sun to congregate
on green space, among the colonies of lucid moss,
the swarms of bees, and theories and beliefs
begin to break apart to be replaced by something else:
like love, it is easy to say what it is not,
nearly impossible to say what it is.
We will go back to the land, to the Moon, where all things forgotten
have been scattered among the strange sunflowers
near the house of the Interpreter, in the company
of shining ones, of one another.

This is one of three Winter 2015 GC Online Exclusive poems by Geoffrey Nutter. Click to read "Lachrymatory" or "Two Fishermen." 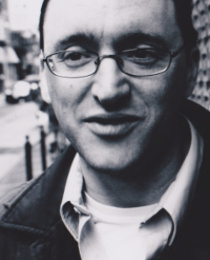 Geoffrey Nutter is the author of A Summer Evening, Water's Leaves & Other Poems, Christopher Sunset, and The Rose of January (Wave Books). He has taught poetry at Princeton, Columbia, University of Iowa, NYU, and the New School, and currently teaches Greek and Latin Classics at Queens College. He runs the Wallson Glass Poetry Seminars in New York City.
Share Share on Facebook Share on Twitter