“You and I Were on a Train, and It Was Storming Outside….”

And did we come to some conclusion about who set fire to the Master’s House
The autumn-petal of it, swinging flame on the black bough of the sky?

There was very little data on living or the suicides six months after the hurricane;
The face of the future appeared as the face of the past

So the survivors decorated the debris with Christmas lights so they could see
The next disaster better and the mudslides and the river and the houses breathing in them.

Nothing fell out as it might or ought except dehydration and the Master’s House
Which flamed and was tall and shook like any retreating God unwilling to retreat.

Around an orange you wrapped the century. It crinkled like the broken spine of a rose
Set on fire; the rose is not a promise of a human future.

And did we come to some conclusion about the future, the fungus in the trees,
The horses licked in thirst that got lost going down to drink water from the ravine

Because we were a republic without history, star in the mouth of God; our bodies
Coming apart in water is an advertisement for our future, our love for a burning house.

“….it would seem clear that no one can call upon Thee
Without knowing Thee,” though Augustine writes of God, here,
Notorious for his absence, he could also be speaking of desire,
Pleasure, the tick of snow against the dry leaves
Which sends my daughter spinning on her heel, the sound of it—
“that, Daddy, that;” sometimes the world, its loitering
Joy is just a that, an absence that calls, demonstrates its over-there-
Ness, its being but without a proper name so a silence
Sounded as when I enter the clearing I once begged for,
You, at an instant, absolute and looking back at me
As if witnessing a calendar or road you’ve already passed through
So my face now in whatever wolf, vulture, or golden horn
Of pleasure a that, a ticking of snow against the wet road,
Nameless, Thee, where you’ve been and left the-body- of-that-
Being so I, so I hurry and press into your leaving
Like a leaf scuttling after the dream of itself,
Into the sharp-wet of the snow against the skin, on into the West
Where desire—and sometimes pleasure—is a type of faith
What you call me to in this spilling, this motion of night:
Your hair loose in the water of your back.
Your spine has become the eye you wish for me to see
Through, but I must close my two good eyes, which is the beginning
Of any apocalypse or rapture: our daughter or the day,
Us touching the North and South of each other without compass
Or rose, this stumbling, a type of faith, too, a seeing
But without the dependence on sight or some heavenly ruin
As signal of an end. It was like the deer outside
Gathering at the window licking the cold glass to smoke. 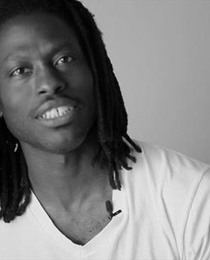 Roger Reeves is the author of the poetry collection King Me (Copper Canyon) and recipient of honors and support from the National Endowment for the Arts, the Poetry Foundation, Bread Loaf, the Provincetown Fine Arts Work Center, and Cave Canem. His poems have appeared in journals such as Poetry, Ploughshares, American Poetry Review, Boston Review, and Tin House.