May This Story Have Several Facets:
An Interview with Moshe Sakal 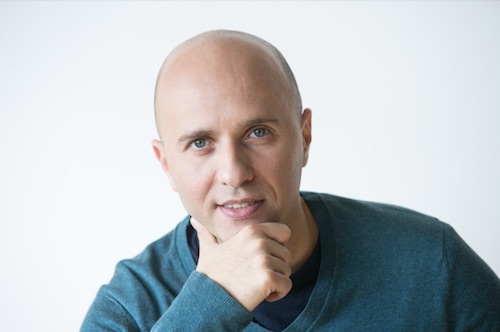 The Diamond Setter was named one of Time Out New York’s “11 Books You Will Want to Binge-Read This Month,” and Entertainment Weekly has called it “a vital depiction of queer life in the Middle East, a misunderstood intersection of identities.”

Sakal was born in Tel-Aviv into a Syrian-Egyptian Jewish family. He has been awarded the title of Honorary Fellow in Writing by the University of Iowa, the Eshkol Prize for his work, and a Fulbright grant.  Sakal lived six years in Paris, France. He currently lives in Jaffa.

Moshe Sakal will be touring the U.S. in early 2019, and will be at Rice University in Houston on January 24th. Details for that event can be found here. The following interview was conducted in March/April of 2018 over email.

B.J. Love: Being a speaker/writer of multiple languages, what do you find particularly beautiful about Hebrew? Its limitations?

Moshe Sakal: Being a Hebrew speaker/writer means being familiar with the Old Testament, as well as with poetry written in the Golden Age in Andalusia in medieval Spain; with modern Hebrew written in Europe in the late 19th century, as well as with Hebrew written nowadays in Israel and abroad. This language has therefore so many layers, nuances, and allusions. One of the most beautiful things about it is the radical system: once you decipher the radical of a certain noun, you can put it in grammar patterns and create many words and expressions out of it.

As for limitations, we only have three tenses in modern Hebrew: past, present, future. It’s true that we writers manage to find creative tricks to deal with it, still Israelis are not always at ease in English with tenses such as present perfect, future perfect, etc. Finally, the Hebrew modern language changes so quickly—like everything in Israeli society in fact—to a point where a book translated into Hebrew only thirty or forty years ago is considered “antic”, and some young readers may not understand it!

BL: How close did you work with Jessica Cohen? What was the translation process like, and what was your reaction to reading a story so familiar to you in the voice of someone else?

MS: Working with a translator means putting your work—your life, in a way—in the hands of someone else, which can be very scary. But one should know to choose well his translators… Jessica’s translation is wonderfully in sync with the universe of this novel and with the characters’ heartbeats. When she’d finished translating the work, we met in Tel Aviv and went over it together. I told her my thoughts, and we had fascinating discussions regarding some terms and topics. It made me think a great deal about Israeli culture and politics—both from the inside and the outside.

One example is the Palestinians’ right of return, which is by far the biggest taboo in Israeli society, to a point that there are even two words In Hebrew to define the return to the land of Israel/Palestine: there’s the word shvoot—used for Jews only, to define a well permitted and encouraged return by the law; and the word Shiva—reserved for Palestinians only and which is the incarnation of the worst nightmare of almost everybody living in Israel nowadays. Both words, by the way, derive from the same Hebrew radical, meaning simply, to return. Only while working on the translation, have I realized that stunning fact, these two words that mean the same thing, but in fact, more profoundly, quite the opposite.

BL: How is language manipulated to sway people politically? I’m thinking specifically of the connotations of the word “terrorist,” or how othering language is used to demean LGBTQIA or immigrant communities. How does this phenomenon affect your writing?

MS: Language is indeed manipulated in so many ways! Only when I was living in Paris, far from where my mother tongue is spoken, did I become aware of that. When you listen to the news in Israel, you’ll find a specific word in Hebrew for a terrorist that kills Jews. You’ll find very soft words for acts done by Jewish settlers to Palestinians. Israelis always talk about their country as if it was their family, with affection, which can warm your heart (especially in days of homesickness), but in a way that just doesn’t leave room for criticism when needed.

In my writing, I am aware of that phenomenon. I try to see the big picture, to manipulate the language and not to be manipulated by it. In The Diamond Setter, I used specific words for each character depending on their community, and not following necessarily the Israeli national narrative: e.g., the way that Palestinians refer to their homeland or hometown. While conducting the research for this novel, I read books that told each narrative—the Israeli one or the Palestinian one—separately. I found very few books that tell one complete narrative, and I hope that my novel modestly contributes to getting to know the story of this land, may this story have several facets. That way, language may not only be manipulated to sway people politically, but also to recreate a past, that becomes [...] a possibility of a present and a future.

BL: Your book seems overtly political, but not on a grand scale; rather it seems to focus on individuals and the circumstances their governments present to them. In other words, they are deeply affected by governments that they don’t necessarily feel represent them, and yet they persist. Can you talk a little about how you gathered/created these individual stories and the methods by which you so delicately wove them together?

MS: I came across some of these stories at home—stories about jewels, famous diamonds, etc. Some of them were inspired by the two years I worked at my father’s jewelry store in Tel Aviv (founded by my grandfather). Some were based on the life of my grandparents and/or myself, and some were my pure imagination. It took me six years writing this novel, although the story was in my mind from the beginning. It was—unlike a common situation of a writer in search of a good story—as if I I felt this story was too good, and for a long time I tried to figure out the best way to tell it.

Finally I decided to tell it through the characters themselves, in short chapters, going back and forth, getting to know their lives, their aims, their passions. It was like extracting a diamond and then polishing it. That way, each character is one facet of the diamond. You can look at this diamond as a whole, and you can fall into one of its facets like Narcissus into his own reflection.

BL: You have a few tales of intense border crossings in your novel. Simultaneously, these characters extend their lives beyond cultural norms or personal borders in their romantic relationships, sexual encounters, or simply who they decide to trust and why. What do boundaries mean to you and what was your goal?

MS: Only eighty years ago, my grandfather, whose name I bear, Moshe Sakal, could go from Damascus, his hometown, to visit a lover in Jaffa, Palestine—be that lover Jewish, Muslim, or Christian—then do some business in Baghdad, Iraq, then visit a friend in Tehran, Iran. Today it’s impossible even to think about this kind of experience, which is why my goal was to recreate this Middle East of the 1940’s, to afford this possibility in a tale, and by doing this to let my characters be inspired by the past and by the courage of people living in the present, to cross boundaries themselves, beyond cultural norms or personal borders in their romantic relationships, [or] sexual encounters.

By recreating the past, I do not mean going back in a sentimental nostalgic way, but by rebellion and opposition to a world in which we see more and more borders, and walls.

BL: Every character in possession of the diamond wants to protect it, and their reasons are rarely monetary. In fact, the diamond has deep sentimental/familial value and that is why they are so protective of it, so often willing to put themselves in danger because of it. Why did you choose it as a symbol?

MS: On the back cover of the Israeli edition of my novel, it says in the first sentence that in the center of this work, lays a blue diamond. But I rather tend to agree with your latter statement. While reading the incredible stories about famous diamonds, I came across the Hope diamond, which, at some point, was in the hands of Turkish Sultan Abdul Hamid II. The sultan got rid of what he believed to be a cursed diamond (we can’t really blame him—this diamond was previously possessed by Queen Marie Antoinette, and others who ended up pretty badly…). In my story, he gives a piece of this diamond to a Jewish beautiful singer, Gracia, the great aunt of the jeweler.

My characters hold on to the blue diamond, but never to its monetary value, neither to its historical value: they gather around it as a family symbol, obsessively, sometimes destructively, driven by its story. We can therefore say that the story is stronger than the stone. Each character chooses whether to believe or not that the diamond is cursed. According to this choice, we can tell who this person really is, as if the diamond reveals this person’s inner world in the most, I would say, clear way. Then, this specific person acts according to the belief or disbelief. Even when someone like Leila—Farid’s Palestinian grandmother—chooses not to believe the curse, still for decades on end she never dares getting rid of the blue diamond. That is to say—stories can save lives, that we already know, but stories are in a way stronger than life itself.

B.J. Love teaches English and Creative Writing at the Emery/Weiner School in Houston, TX. Poems of his can be found in The North American Review, Gulf Coast, and numerous other journals and anthologies.