The bridge didn’t fall into the river when I crossed over it.
I crossed over the bridge and drank a mug of beer in a small unclean restaurant.
Over the bridge I returned by foot again.
It did not fall then either.
Back to my small room with adequate water pressure and the scent of smoked cigarettes.
I wouldn’t have time to enjoy fully the three individually wrapped soaps, the six towels of various sizes, the shower cap, the sewing kit.
In this our age of unmolested ungulates we must make our own sacrifices.
I went back outside to buy beer.
The store (there was only one) had just warm beer, though a lot of it.
I bought five warm bottles then drank them in my room after opening them on the edge of the desk.
The town had been coughing since the dark arrived.
It began while I was on the bridge the second time.
Was still going when I went out for beer.
And in the morning, while I waited for the van that would crash two hours later, it still was.
When we crossed the bridge in the van the bridge remained where it had been.
It had not fallen into the river or been disassembled in the night by small worn hands and traded for girls of unmarriageable age.
The van, which hadn’t yet crashed, went right over the bridge into the greasy gray fields.
How much longer till we crash, I thought to myself.
But as I could not speak the language I did not ask the driver or any of the other passengers.
There was no reason to worry.
I have always been patient.
I could wait.

Friedhelm was in the garden, crying by himself near the tulips.
There was little I could do.
I did not know him then.
I lived an ocean away in a small expensive apartment without a garden or reliable plumbing.
I was in the kitchen at the refrigerator.
We were all out of eggs.
This was no reason to break down in tears.
What would Friedhelm think to see me there, shirtless, in my underwear, the cool air floating over my body, crying like a child?
I did not know as I did not know him then.
He was far away in his garden.
He was deep in the night lands kneading Polish breasts.
He was eating scrambled eggs at his little blue table as a vector of sunshine advanced toward his plate.
We needed the same things, he and I.
When they found me in the cereal aisle weeping inconsolably, it was because I knew we would never meet.
We would never play a match of badminton together.
We would both die alone, far from home, in the embrace of a person whose name we didn’t know. 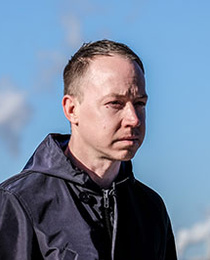 David Sewell edits the online journal Fou. He lives in Brooklyn, New York, where he works as a medical editor. His poems have appeared in Jubilat, Forklift Ohio, Sixth Finch, Bat City Review, and Poetry East, among other places.