Martha tried to get a hold of Frank.
She sent a carrier pigeon
with a carrier pigeon attached to it
so he could send a reply.
But her fear now
is that this new carrier pigeon team
might have died on its way to him,
so she has tentative thoughts about sending horses,
one tied upside down on top of the other.

Game length: to be honest, she thinks, the physics
have always been against her.

questions came up: what about under the rock
where I used to sit as a kid sneaking cigarettes?
or next to my family’s dead cats and dogs?

or on that mountain in the Smokies? or...
It was as if each was saying to the other,
I hope you’re still around after I’m dead.

Game length: My roommate Emilio reads one of those magazines
where people send in memories—a pretend submarine
made from an old coal bin, learning to parallel park
with a boyfriend’s car, Mom got her picture taken
sitting on the fake tiger in Daytona Beach—hundreds and hundreds
per issue, and he reads all of them every week
because the contents make him happy and the form makes him sad.

we built a thousand forts in the woods,
carved bows and arrows, placed survival kits,
slowly stole gasoline from my dad’s chainsaw
preparing always for some distant war

Game length: I remember feeling like I had the rest
of my life before me, like if I turned around suddenly,
there’d just be a cliff and then darkness, and I could
light it on fire if I wanted to and it would burn forever and ever.

Strangers dancing at a party
made from hinges, Olivia with the hinged hands
comes in from the cold, and we open the party
and we open her hands, and she’s the only one around,
the only one at the party, and it’s in her kitchen, not really
a planned party, she’s trying to take her winter gloves off,
shaking them from her hands like a kid, it seems to her
like a dance, sometimes we need to be alone, she shakes
her butt a little, sings, “Shake that booty,”
laughs a bit, “Shake that booty,” gets the gloves off,
makes some hot chocolate, sets a hinge on the clock,
sees it later, laughs again.

Game length: The more I make my senses a machine,
the louder they get.

your underwear matches
does this mean you love me
or you’re leaving
and want me to regret it?

Game length: my friend who is a stripper touched my cheek
with hers and whispered, “Don’t worry, we’re most naked
wearing one piece of clothing.”

Mark stole my shoes.
He held me underwater in the swimming pool.
He tied me to a tree and hit me with sticks.

So I learned to tie a noose. I practiced it over and over
until I could do it with my eyes closed. And then
I taught him how. We used his mother’s clothesline

to hang his sister’s doll
from the curtain rod in her bedroom.

God said, “This forest will be a field
and this field a farm, a farm a living, a living
a beautiful reason to go on, going on
as if there is more than just etc. becoming etc.”

Game length: you said, I want to not feel that way. 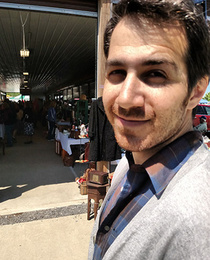