Patrick Clement James, a graduate of the Manhattan School of music, is an MFA candidate at the University of Houston. He currently serves as an assistant editor in poetry for Gulf Coast.

Who Is Sylvia? What Is She?

I used to love ghost stories, back when death didn't seem so real. When I was young, my dad often took my brother and I camping. At night we sat around the fire, roasting marshmallows, and he told us about monsters, aliens, and ghosts. We lived in New Jersey, and the Pine Barrens weren't far off, so sometimes his stories were about a local legend called the Jersey Devil: how it was born, the havoc it wreaked on the midwives, how it lurked among the carpets of pine. But more often than not, dad's stories were about ghosts--luminous specters dangling in the branches above us. As a child, I felt simultaneously delighted and horrified by his stories; they've been lodged in my brain ever since. As an adult, however, I'm terrible at telling ghost stories. I can never think of anything scary, and I usually veer toward distasteful violence. Despite having a bizarre fascination with the dead, I don't really know how to talk about ghosts. • • • On Monday, fifty years ago, Sylvia Plath committed suicide in London. Beyond this, what I know about Plath mostly comes from her poetry and fiction. I first encountered her poems as a teenager. And when I was in college, my mom gave me a copy of The Bell Jar, a book I found depressing and bewildering. In those days, I thought Sylvia Plath and I had very little in common--I have trouble relating to people who kill themselves. And even today, so much of Plath's poetry leaves me feeling uncomfortable and nervous. But I can't deny the force of her work. There's a fascinating, inescapable momentum to it. As Ani DiFranco says, "everything bows to beauty / when it is fierce / when it is flawless." And Plath's poems possess an undeniable power. The beauty may be terrible, in fact terrifying, but it's there½and it's fierce. • • • I have this friend, and we often talk about having a talk show together. We have an ongoing joke that there should be a segment on our show called "No! Sylvia! No!" What exactly happens in the segment is not quite clear. We just like the sound of it. I think it speaks to the mythology of Plath. She's the patron saint of too-many-feelings. Recently, a friend of mine read one of my poems. Later, she said my work was confessional. Something about the comment stung. It was as if she were saying: you have too many feelings. For me, the term confessional is rather loaded, and it makes me think of Plath. When my friend called my poem confessional, I couldn't help but notice a derogatory statement hidden somewhere in the mix--like I was narcissistic and self-obsessed. Confessional sounds pejorative: a confessional writer is someone who can't keep their business to themselves. They have no character and they're a gossip. They're self-destructive. My resistance to the term might have had more to do with my own discomfort with my writing than anything else. In a recent roundtable discussion in Gulf Coast, curated by Allie Rowbottom, Eula Biss had this to say about the genre of memoir and its relation to the self:

I'm troubled by the very popular suggestion that memoir, because it sometimes sells well, is a selling of one's self. This charge is sometimes extended to anything written in the first person, a charge of "navel-gazing." This also somewhat solidifies an often vaguer association between memoir and the body, and then the frequent efforts to position memoir as low art or "artless." It seems quite possible that all of these attitudes are actually the result of our extreme anxiety, as a culture, around the concept of the self. This self-loathing (ha!) just happens to intersect on occasion with woman-hating, another cultural feature½I don't know. But I do know that all this affects, and sometimes paralyzes, my students, who are often fearful or apologetic when writing about or through themselves. I have, more than once, met that fear with this quote from [Sarah Manguso's] The Two Kinds of Decay: "Those who claim to write about something larger and more significant than the self sometimes fail to comprehend the dimensions of a self."

In light of these ideas, I can't help but wonder if my fear of being called a confessional writer has something to do with my own internalized self-loathing, and therefore my own unconscious homophobia/misogyny. As a gay man, it's an incredibly uncomfortable thing to think about--which explains why a poet like Sylvia Plath is an uncomfortable poet to read. Her own insistent, courageous self-confrontation points to my barely repressed fear of staring down the self. • • • Sometimes I don't want to comprehend the "dimensions of the self" because I'm not quite sure what I'll find there. • • • Poets are fascinated with the dead. In her book The Burning of the Three Fires, Jeanne Marie Beaumont has a poem called "Channeling Sylvia: 8-Ball (Interrogation)." The piece is constructed from a series of questions addressed to Sylvia Plath, and the responses happen via a Magic 8-Ball. In the notes of the book, Beaumont affirms that the poem is a direct transcript, without editing, and that she actually performed this kitschy séance. The result is remarkable. Sylvia's answers are terse, as the medium of the 8-Ball dictates, but they also snap with a wit that is unmistakably Plathian. "Is there ennui in the afterlife? / YOU MAY RELY ON IT." I can understand the impulse, the need to ask such questions. A myth like Sylvia's commands our obsession. "Was it all worth it, for the poems? / YOU MAY RELY ON IT." • • • Last semester, my friend bought me a Ouija board for Christmas. I insisted that the first spirit we try to contact be that of James Merrill. It was an utterly unsuccessful enterprise, but we definitely tried our best. We even set out a jar of Nutella as an offering for him. In retrospect, we probably should have poured a glass of wine, like Yeats in "All Souls' Night." But unfortunately, I didn't have any in the apartment. We sat at my wooden table, both hands on the planchette, and posed our questions to the dim, eerie apartment. Candles burned on the table. Shadows caressed the walls. We concentrated. And nothing happened. It was very disappointing. As we begrudgingly put the board away and turned the lights on, my friend asked, "Why, of all the dead people out there, do you want to contact James Merrill?" I thought the answer was obvious: "For the gossip!" • • • The Poetry Foundation's webpage for Sylvia Plath has a quotation from Ted Hughes, regarding her work: "Her poetry escapes ordinary analysis in the way clairvoyance and mediumship do: her psychic gifts, at almost any time, were strong enough to make her frequently wish to be rid of them." Yes, it's these psychic gifts that make Plath's poetry so remarkable--her ability to see the world so perceptively, so unbearably. And perhaps writing was the manner in which she maintained her vision, fifty years ago--back before she refused such clarity, before she had to turn away. • • • Thinking of Plath's work reminds me of the reasons we tell ghost stories. Whenever I come across a really good poem, it takes me back to those nights with my dad and his campfire--that feeling of delight and terror, the curtain being slowly pulled back on a window of truth. In defense of confessional poetry, in defense of Sylvia, I think there's more than the element of craft to good writing. To be a great writer, one must be willing to write the truth. And, when considering matters from this point of view, isn't there an element of confession to all writing? This is the way I see it, we confide. Or sometimes, more emphatically: This is the way it ought to be. • • • And what is reading, if not a séance? What is writing, if not a little bit of gossip? 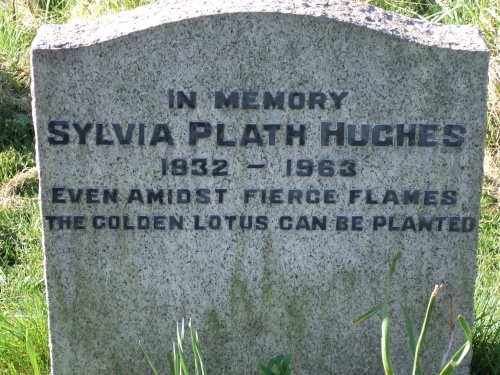