Erica Ciesielski Chaikin is currently an MFA student in graphic communications at the University of Houston, researching intersections of design and traditional hand-produced craft methodologies. She holds a BA in geography with an emphasis in studio arts and a master's in art education, and has taught at the middle school, community college, and university levels.

From an overabundance of fruit (mixed with elegant china and random doll parts) to houses of "liberated" mugs, the 2013 National Council on Education for the Ceramic Arts Biennial at the Houston Center for Contemporary Craft has a little bit of everything. The exhibition (January 25-May 5, 2013) coincides with the NCECA conference this spring and offers a diverse look at contemporary ceramic work. With 39 works by 35 artists, the show, produced by NCECA Exhibitions Director Linda Ganstrom, showcases a vastness of manipulation of the medium. Diverse, unexpected sculptures range from conventional vases and mugs to contemporary interpretations of what ceramics is and can be. Two pieces well illustrate that diversity as soon as the viewer enters the exhibit. Beauty (2010) by Claudia Olds Goldie is a very traditional piece--a human figure with modern lines. Just next to this is The Harvester (2012), a whimsical mixed media exploration by Lisa Cecere. A large painted floral background lies flat against the wall, covering an area about two feet wide, with a small (approximately 4") Victorian-style boy figure. The folk-style painting paired with the black, tar-looking substance (on both the figure and shelf supporting it) makes one question the use of the material--what is this dark, shiny substance, and why is it used in this way? 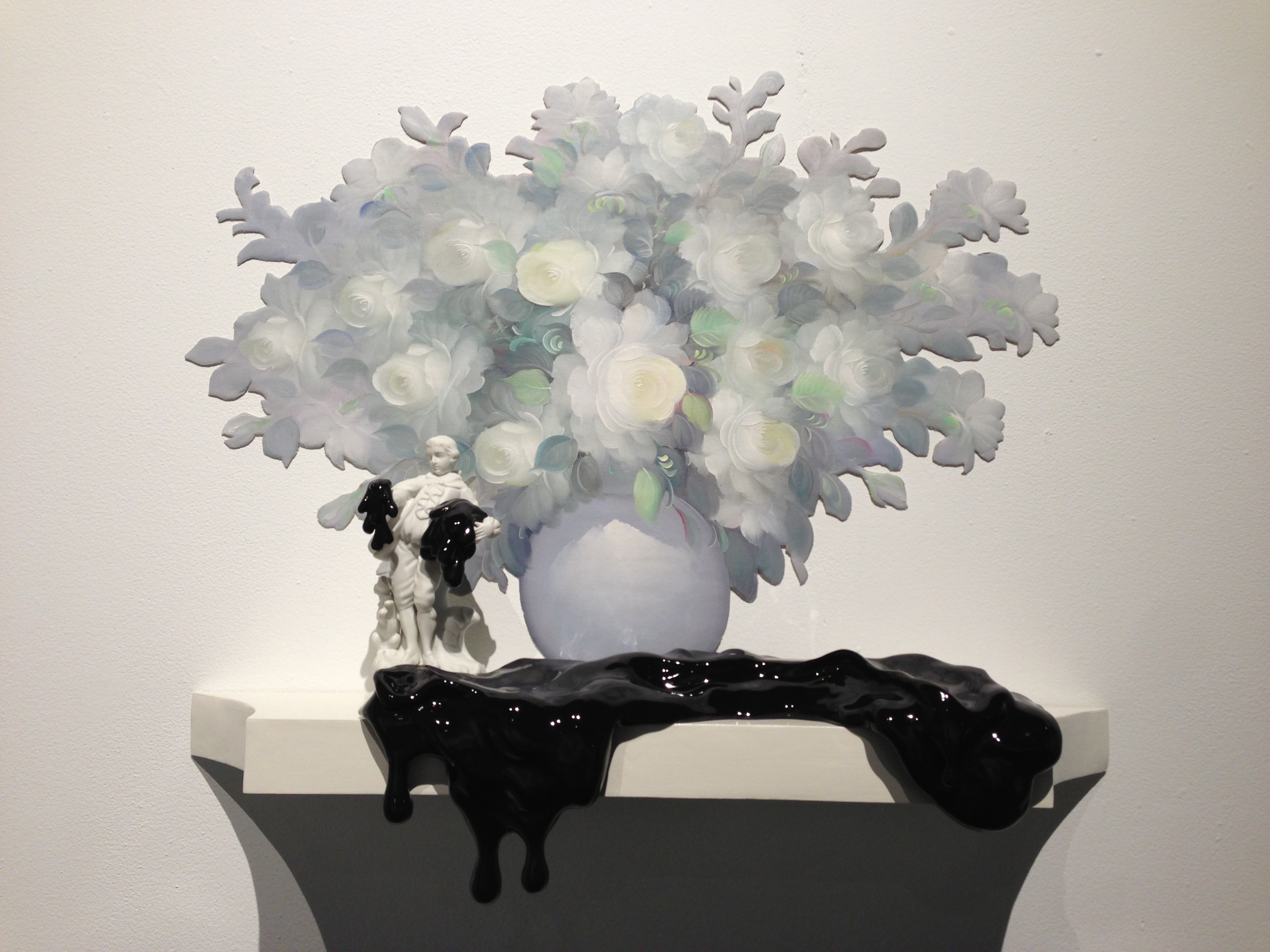 On the bright teal title wall nearby a roughly 20x30" gem-like piece hangs like a painting, not put on a shelf as most ceramic work is displayed. Sliced gold nugget, avacadonium, celadonium, bark spray matrix (2012) by Renee Brown is a distinct work made from media ranging from earthenware and other ceramic materials to acrylic paint, sand, epoxy, and micro beads. The variety of textures in this work draws the viewer in closer, begging to be touched. 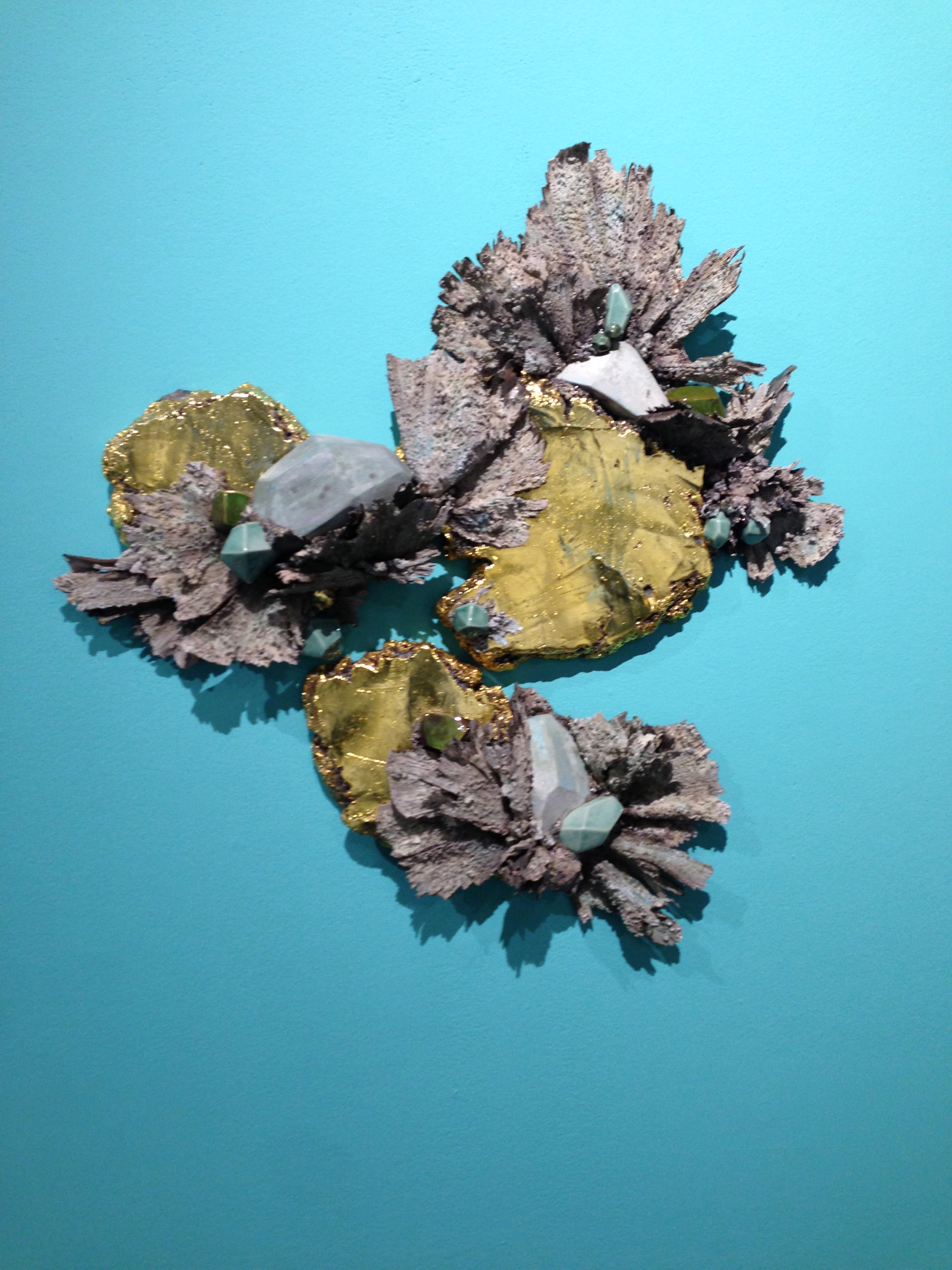 The Golden Cage 2011 by Shenny Cruces, another mixed media work made from slip-cast porcelain, luster, and many found objects, is a large cabinet filled with these found objects, some smashed against the front, almost beyond recognition. The single pieces in gold and the case as a whole provide a feeling of elegance and richness, but upon delving deeper into the pieces, disregarded doll heads, legs, and other childhood toys appear. This mix of embellishment and broken nostalgia creates an almost macabre scene, but again, one that draws the viewer closer. Even the more traditional-style vases contain details that demand close investigation. Iraq Memorial Vase #1 (2011) by Thomas Lane is a perfect example. A tall and simple white vessel, it is covered with tiny, almost illegible names of victims of the Iraq war. The accumulation of seemingly microscopic names magnifies the feeling of loss. Inch by Inch (to Laura Potter) (2012) by Du Chau is wall-mounted, though in an unexpected way. Each ceramic piece of slip-cast porcelain is hung on music wire embedded into the wall. It is visible either from the front, where a cascade of these pieces seem to quietly move in the nonexistent wind, or from the side, a waterfall of shapes and shadows that requires a more pensive consideration. The largest work in the show is the only participatory piece. Misfit Cup Liberation Project (2013) by Michael Strand is a work specifically created for this exhibition. Strand has mounted a series of simple wooden house-shaped cubbies on the wall, each containing a cup designed by the artist. During the opening, each cup was taken and replaced with one owned by the receiver of the new cup. No money exchanged hands--just an exchange of one cup for another. On a nearby podium, recipients can read about the project and share their own stories of their cups. Each new cup has its story posted with it, and reading why and how people gave these cups back to the project is compelling. Each story has its own little quirks, from the child's sippy cup that the mother realized was leaking chemicals into her child's drink to the gift given but never used. The overall feeling of the show is one of experimentation, exploration, and pushing the limits of media. This wonderful contemporary exhibit showcases the skills and passions of many ceramic artists working today.