One occupational hazard of writing is finding yourself frequently susceptible to strange obsessions. You might argue writers depend upon them. One of my latest is fungi and mushrooms, and I freely admit: that is a pretty weird fixation to have, if not a downright alarming one. It all started when I was a vegetarian looking for palatable meat alternatives. (It's hard to get excited about tofu). I missed the texture and the umami of meat. In the meat-free section of a Stop & Shop, I discovered cutlets of a product called Quorn--a meat alternative derived from fungi grown in vats. Sounds gross, I know. But it really does taste a lot like chicken. And, I learned, it's not so very different from the fungal byproducts I was already consuming. For example, almost all of the citric acid found in soft drinks you've probably been drinking for years comes from fungi. (Not, as I had thought, from grapefruits and oranges and lemons). 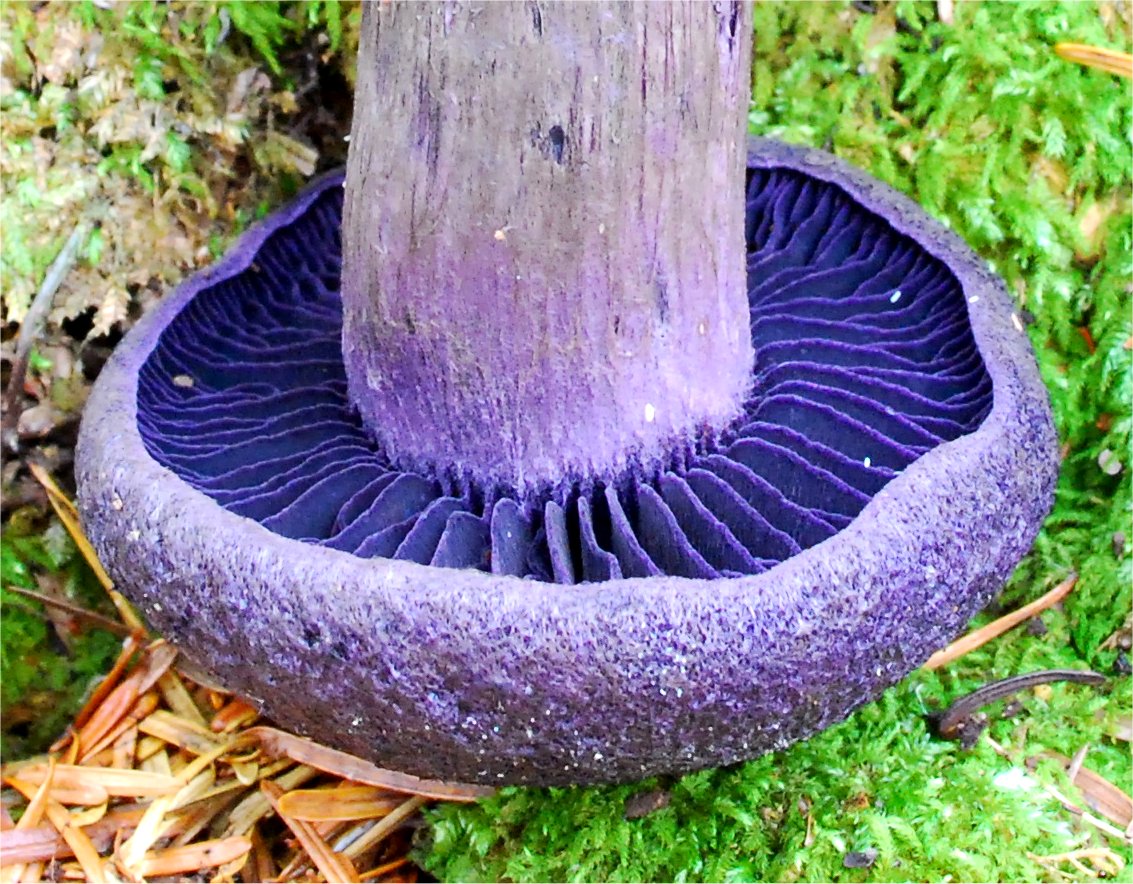 Cortinarius violaceus. I did some more research. What I discovered was an astonishing gap in my knowledge. Fungi and mushrooms are all around us. Many other cultures in the world are aware of this (e.g., Nigerian, Russian, Japanese, Chinese, Malawi, Slavic and Scandinavian). In fact, those people enthusiastically gather mushrooms, sell them in markets, consume them, and pass on knowledge of the tasty, safe ones to their young children through nursery rhymes. Does this sound crazy? It did to me. "Mushrooms" conjured up three associations in my mind:

At best, a pizza topping. At worst, a highly-controlled or deadly substance. Not something you would encourage your ten-year-old to go gather. You might as well put razor blades in the Easter eggs. This turns out to be a pretty standard North American perspective. Despite the enormous biological variety of mushrooms on this continent, the relatively small number of dangerous species, and the usefulness, delectability, and beauty of many others, North Americans tend to regard all mushrooms the same way: with fear, mistrust, and above all, ignorance. Same goes for inhabitants of the United Kingdom and former British colonies (generally speaking). 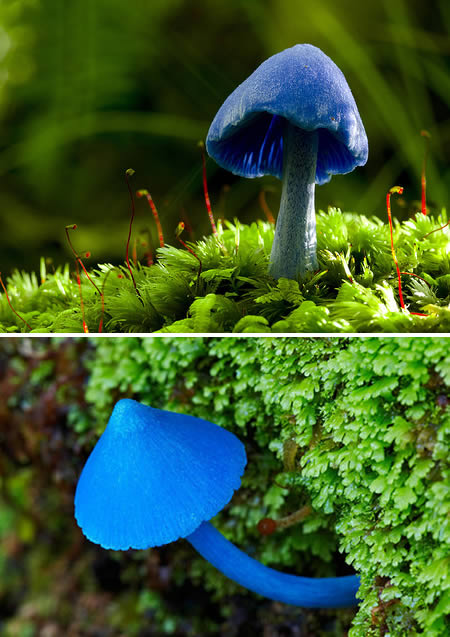 Entoloma hochstetteri. Yet, we mushroom-fearing societies will find ourselves matched or outnumbered by our mushroom-loving counterparts if we travel to Africa or continental Europe or east Asia. Mycologist David Arora singles out Russia as a country with a singular fondness for fungi. If Arora's book Mushrooms Demystified) is to be believed, small talk in Russia isn't about the weather. Instead, "strangers often engage in polite conversation about how the mushroom season is progressing." Apparently mushroom hunting is somewhat of a national pastime there. Not so in the United States. Why some cultures exhibit wild enthusiasm for fungi and others, pure loathing, is unclear. But there's a reason we North Americans share our bias with other English-speaking peoples: literature. For many years, British and American writers have been perpetuating this categorical prejudice. Consider, for example, this passage by Sir Arthur Conan Doyle, from the first chapter of Sir Nigel:

A sickly autumn sun shone upon a land which was soaked and sodden with water. Wet and rotten leaves reeked and festered under the foul haze which rose from the woods. The fields were spotted with monstrous fungi of a size and color never matched before--scarlet and mauve and liver and black. It was as though the sick earth had burst into foul pustules; mildew and lichen mottled the walls and with that filthy crop, Death sprang also from the water-soaked earth.

Conan Doyle was not the only writer quick to identify fungi with evilness. Asserting that "the mushroom is the elf of plants," Emily Dickinson once wrote,

Had nature any outcast face, Could she a son contemn, Had nature an Iscariot, That mushroom - it is him.

For another decidedly negative portrayal of mushrooms (and the British bourgeoisie), see D.H. Lawrence's poem, "How Beastly the Bourgeois Is." He concludes, "what a pity they can't all be kicked over / like sickening toadstools, and left to melt back, swiftly / into the soil of England." Exactly what harm does this particular systematically-reinforced bias do, you may be asking. Compared to the other prejudices that English and American literature have historically transmitted, a mushroom stigma doesn't sound so bad. And given the very real danger of poisoning posed by certain highly toxic species, a healthy amount of mistrust for fungi does not seem unjustified. 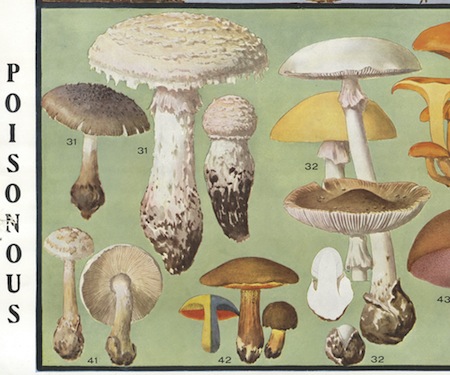 Amanita phalloides. It's a tricky question. For me anyway, the greatest shock upon learning more about the world of mushrooms was the intellectual embarrassment. So great a hole in my understanding of the immediate and familiar world cast the integrity of my other knowledge in a dubious light. If culture was responsible for my ignorance, what else might I be missing? Our society prefers not to think about fungi, and it makes this preference consistently across state lines and generations. What other calculated swaths of ignorance might I be unwittingly inheriting and reproducing? All good questions for an artist or a writer to ask himself. Another line of thinking: in shunning fungi, we avoid serious risks, but we also ignore serious benefits. The bathwater, safely disposed of, might contain a baby or two. After all, penicillin was derived from mold. If Alexander Fleming had too readily absorbed the idea that fungi were just plain no good in 1928, we might be looking back on a very different twentieth century. Similarly, there is now strong evidence that other fungi can help address the problems of today. Some mushrooms have been shown to fight cancer, lower "bad" cholesterol, and even help clean up oil spills. Maybe I've only proven here how difficult it is to write about your obsessions without alienating readers. It's hard to convert a strange fixation into literary fruit. Some people pull it off, though. Marianne Moore had a persistent fascination with zoo animals. And, as someone once observed, Walt Whitman must have spent a lot of time actually thinking about grass. An obsessive focus on a seemingly trivial thing probably didn't earn these poets a lot of respect at the time. Recognition came later, once the poems had been written, revised, and published. What's more, odd fixations, in and of themselves, aren't responsible for the success of these poets' best works. Without formal ingenuity and some connection to a larger human theme, a poem about a blade of grass or a wood-weasel or a fish would fall flat. Still, a recurring obsession seems to get things off to a good start. I'm sometimes startled by the amount of time I spend thinking and reading about mushrooms--how some of them help detect crime; how some of them can break through asphalt, yet will dissolve into ink in minutes if you pick them; how some of them glow for no (known) reason. It's true, my preoccupation puts me in weird, weird company. But maybe I shouldn't be so alarmed. It's possible I'm in a very productive place.