R.A. Villanueva is the author of Reliquaria, winner of the 2013 Prairie Schooner Book Prize. He is also the winner of the 2013 Ninth Letter Literary Award for poetry. A founding editor of Tongue: A Journal of Writing & Art, he lives in Brooklyn.

“…if there were more wreck and less discourse."
—Gerard Manley Hopkins in a Letter to Robert Bridges, 2nd April 1878.

Last spring, I had the chance to pitch (then teach) a six-week open course at Poets House, just off the Battery in Lower Manhattan. I decided to be honest with myself and to conceive of something drawn from my own anxieties and obsessions at the time, namely how to write beyond—and apart from—the traditional dynamic of the workshop.

By “traditional dynamic of the workshop,” I mean the ritual by which you “complete” a working draft and then bring it to a table or seminar room circled by your peers (and one more accomplished writer) in order to hack away at what “works” or “isn’t quite working yet” about the poem (or story). It’s a well-trod dance by now and for all their perceived and received value, these sorts of engagements are often spiked with caveats.

(N.B. x 4: 1. It’s worth looking at Emilia Phillips’ course description for “On Writing Poems, Workshop, and Reading Like a Writer,“ which is a cogent, sharp primer on the value systems embedded in “the process of reading, writing, and workshopping poems.” 2. Nick Ripatrazone’s  “When Students Workshop Their Teacher” is another exceptional reflection the inherent power dynamics of the workshop. 3. Take to heart this essay by Matthew Salesses—a powerful and considered questioning of “[w]hat happens when the workshop pits a person of color's lived experience against a white perspective of how that experience should read on the page.” Finally, 4. Paisley Rekdal’s “The Defense of the Poesy Workshoppe” weighs the various stakes of these debates and the charged language which powers rival perspectives.)

Interrogations of “workshopping” feel absolutely vital (especially now that the verb, “to workshop,” has become so procedural and canonized). And yet, I don’t know if what ultimately emerged was a conscious rejection of that Iowa model. I was more keen on adaptation, or a rehabilitation than exorcism. I think I was—and am—simply interested in how being in the presence of other writers could be harnessed to care about making, playing, unsettling, conjuring, fucking with, experimenting.

In Dean Young’s The Art of Recklessness: Poetry as Assertive Force and Contradiction, he comes to blows with the idea of the workshop as a proving ground where craft and clean-edges, seamlessness and “universality” are prioritized over the messy, the asymmetrical. No more manicured poems, he belts out. He sings in the all-caps: “THE WRITING OF POETRY IS NOT A CRAFT. WE ARE MAKING BIRDS NOT BIRDCAGES.”

As I wrote in my first course description, I wanted to “take this as our rallying cry.”

If Dean Young provided the banner and the vernacular for the work, then Anne Carson and Robert Currie gave the work its spirit.

A few years ago, in the spring of 2008, they were set to co-teach a class at NYU—one that was ostensibly labeled a “craft” class when announced. It was opened to all genres and the buzz was (if I remember right) an expectation of lectures, Classics analysis, disquisitions on the mechanics and minutiae of translation.

But what we got instead was something entirely bizarre and unwieldy.

What ac/rc christened Egocircus was a Frankenstein mash-up of process and "product," the lovechild of Sophie Calle and Laurie Anderson. There was very little direct instruction. Here, for instance is one representative hand-out from about a month into the course: 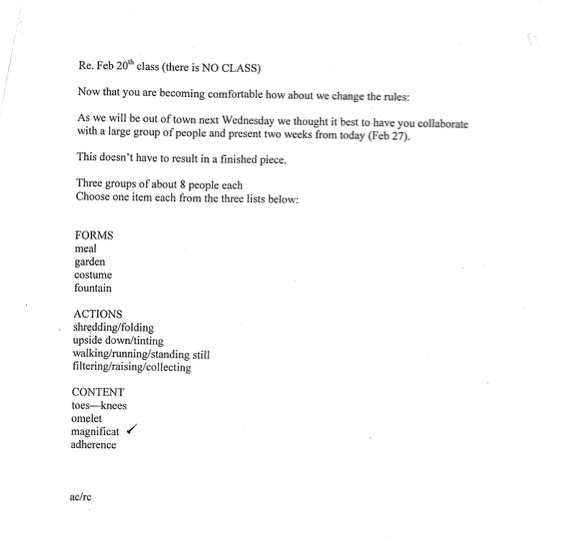 The aftermath: we literally enacted alternatives to "The Workshop" and to the tidy and quality-controlled; we pulled-free (even temporarily) from the tractor beam of making with a mind toward publishing. It was a gift, really, this embrace of absurdity and chance-randomness. Granted permission to run amok, we had license to deviate from what we knew as "good" and to spawn extraordinary things.

We translated stanzas from Rudyard Kipling's "The White Man's Burden" into our parents' tongues and dialects.

We played instruments we didn't know how to play over choral readings of “Lycidas” by John Milton.

We created site-specific performances on train lines, on borders, in bodegas between boroughs and states. We rode the Roosevelt Island Tram and made films about its chronic care hospital, its smallpox wards.

We created photo-essays with our phone cameras, erasures from texts we couldn't read. We sangs songs about wartime ambiguities and failed revolts.

And for once it didn't matter that these were raw, messy, "bad," or largely unfit for listing on a bio. Because we weren't going to exchange them for critique or editing. We were going to perform, reveal, show vulnerable the piece in-flux. And we would do this week after week.

The only recurring question about revision came from Currie, asking softly at the close of a performance: "If you were going to do this again, what would you change?"

Since that initial class, Birds Not Birdcages: Playing in Form has morphed and reconfigured itself as time has gone on and as venues have shifted. Reading lists and materials and catalysts have changed.

No matter the name, what all share is a fixation on riffs and remixing, detours and generative frustrations. A bringing together of seemingly contradictory and incompatible languages, genres, and conventions. There’s talk of improvisations in the face of nonce forms and strange constraints. A bucking of the familiar and an awestruck meeting with the expansiveness of poetry being performed and published and made back home.

Imagine asking, “What do you make of this?” and “What will you do now?”