Rachel Harmeyer is a Houston-based visual artist and graduate student in art history. She is currently a member of Frenetic Theater's Artist Board, and her first solo show The Bride Laid Bare will open to the public on June 30, 2013 at the Frenetic Theater. Rachel graduated with a BFA from The School of the Art Institute of Chicago in 2008. She will receive her MA in art history from the University of Houston in May, and will continue her studies at Rice University, beginning a PhD in their art history program, in the fall of 2013.

When you enter the galleries at the Houston Center for Contemporary Craft, a conspicuously placed sign immediately admonishes you not to touch the art. Frequent visitors to art museums might find such an edict superfluous; but at the HCCC right now, this warning is necessary even to the most seasoned viewer because of the tactile qualities of the work on display. Craft calls to attention handmade details and processes, and the ghost of the artist's hand sometimes seems to linger in the finished work. This is especially true in the case of Janice Jakielski's Constructing Solitude (January 25-May 5, 2013). The viewer's desire to touch Jakielski's incredibly detailed pieces meets her work's invitation to consider other forms of sensory perception--especially sight, but also hearing. In Constructing Solitude, Jakielski has crafted a group of bonnets, each distinct, which she has displayed on mannequin busts suspended on the wall, in front of painted backgrounds in corresponding colors and patterns. The bonnets themselves are handmade assemblages, combining embroidered fabric, artificial flowers, and painted porcelain, which together create a boldly colored and expertly constructed reimagining of Jane Austen-era materiality. Eleven of these bonneted busts are presented frontally, directly facing the viewer, while two pairs of two busts are presented in profile, facing away from each other. One of these pairs, seemingly the centerpiece of the show, displays a conjoined double bonnet that eludes any possible utility as a fashionable accessory. The other pair of bonnets, filled with artificial flowers, formally resemble indigenous headdresses and indicate a deeper level of subtext. A bonnet simultaneously reminiscent of a World War I-era aviator's cap and a wide-eyed insect confirms to the viewer that the work contains multiple meanings beneath the surface. These works, read as bonnets, which Jakielski refers to as headdresses, may invite the viewer to imagine the possibility of their use as wearable objects; but in truth, they were solely made to be looked at. 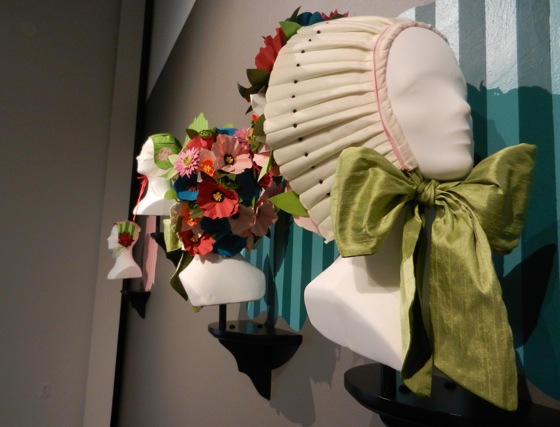 In this sense, and in true nineteenth-century fashion, Jakielski's work privileges the sense of sight. On a high wooden table in the center of the space, six sets of binoculars, positioned three to a side opposite each other and focused on three all-white porcelain and mixed media vignettes, depict what appears to be a cornfield, a pile of leaves, and another grouping of flowers. Many of the headdresses include masks that obscure the vision of the imagined wearer, such as one with meticulously embroidered birds covering the eyes of the mannequin. Here, one can look, but not touch: the presumably muffling properties of the headdresses, visually hinted at by the cup-like coverings over the mannequin's ears in one of the pieces, can only be imagined, not directly experienced. Jakielski's use of traditionally feminine materials and processes, polite nineteenth-century drawing room forms of making, is a subterfuge: the prettiness and ladylike appeal of these works is merely set dressing for what is ultimately a contemporary meditation on isolation and solitude. The silhouette of the mannequin with the obscured hearing has a familiar counterpart in the urban landscape: the commuter wearing headphones--and even the obscured vision seems reminiscent of the opacity of sunglasses. Jakielski's Constructing Solitude is concerned with the unknowable, with subjective experience: ultimately her subjective experience. According to the literature provided in the gallery, Jakielski "carefully selects the floral imagery for each work using the language of flowers or floriography--a Victorian-era means of communicating with flowers to send messages," and "similarly, her depiction of birds is a reference to auspicium, a form of divination that interprets signs from the gods through the flight or migration patterns of birds." Unless one brings a naturalist and a floriographic dictionary into the gallery, however, the precise meaning of these works will remain elusive--as perhaps they should.