Betsy Huete is an uncreative writer and installation artist who received her BFA from Rice University in 2006 and is pursuing her MFA in sculpture from the University of Houston. Huete has had solo exhibitions at Lawndale Art Center and Matchbox Gallery. She participated in this past year??s Fringe Festival and will be included in the retrospective of Darra Keeton. Huete attended the summer 2012 artists?? residency Mildred??s Lane in Beach Lake, PA, and was included last fall at the MOMA in conjunction with it. She currently serves as the assistant editor for Art Lies, assisting with its merger with Gulf Coast.

Artist Leslie Hewitt and filmmaker Bradford Young are currently showing (until May 5, 2013) their second and most recent collaborative effort, Untitled (Structures), at the Menil Collection. Commissioned by curator Michelle White in 2010, the pair began by looking closely at the collection's recently acquired Civil Rights Era photography from Edmund Carpenter and Adelaide de Menil. Those photographs, all 230 of them, provided the springboard for the rest of the project. Hewitt and Young began exploring this archive, and with it, notions of history, of memory and nostalgia. They were ultimately inspired to revisit the specific locations not only demarcated in several of the photographs, but areas that harbored pivotal moments in civil rights history. What memories does a location inherently hold? How does history, particularly a history so traumatic for our country, leave its mark on a place, and how does one access it in a contemporary framework? While filming in the Arkansas Delta, Memphis, and Chicago on location in such places as the former Johnson Publishing Company, the Chicago headquarters of Ebony and JET magazines, and the Universal Life Insurance Company Building, Hewitt and Young investigate such questions. The sheer historicity of Untitled (Structures) is easily the most compelling aspect of the piece. Via single-shot filming, a compression of the present day to the past occurs in these hauntingly rich spaces, simultaneously revealing and concealing to the viewer unspecified pockets of memory and time. As the fluorescent lights flicker upon the outdated furniture of the Johnson Publishing Company and sunlight peers through the windows onto the scarlet pews of the Clayborn Temple AME Church in Memphis, the viewer lingers along with the shot in liminality between movement and stagnancy. It is this liminality that exhumes these locations petrified in the decade of their relevance and reifies them into contemporaneity. Simultaneity of time and memory is further buttressed with notions of the body. In addition to vacant locations, Hewitt and Young incorporate actors in separate shots. The filmic strategy with the actors is similar to the location shots: single shots with minimal movement. The shot almost never, if ever at all, provides a straight on angle with each of the people in the film. They all seem to be looking somewhere else, aloof and waiting. These corporeal shots, sometimes crisp, sometimes intentionally blurred, are intimate and stunning, and are usually closely focused in on part of a face or a sleeve, or hands. These fractured faces and textures seduce the viewer into an observation of pure form in conjunction with the slow undulation of a breathing body. One of the few exceptions is a young adult black woman facing a wheat field, back to the camera. She stands poised and waiting, motionless among the beautifully excessive golden field lightly swaying in the wind. In this case, the captivating undulation rests with the field, not the actress. The viewer's eye becomes mesmerized in the implicit narrative of the dual shots when a place is lined up with a place, or a body with a body. When incongruous shots are linked, however--for instance, a body next to a vacant place--the viewer spends less time considering the concurrent histories of location or intimacies of body and become more involved with the artists' intention and logic. The viewer is therefore removed from the most effective and coldly intimate narratives of the shots because she becomes too busy attempting to solve a riddle. 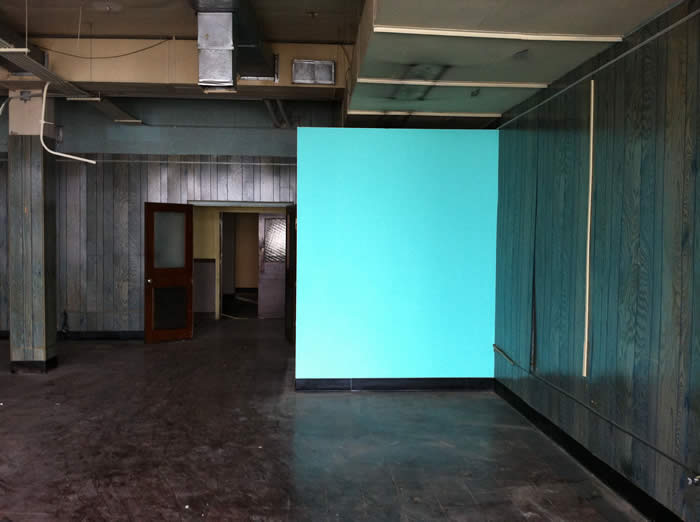 What does really work is the dual projection. It works fantastically not simply as a strategy for juxtaposition; it also brings the realm of video into sculptural space. While most opt for the dual projection to appear as anyone would logically think it would, which is side by side, Hewitt and Young opt to project on adjacent corner walls so that the viewer is forced to face the corner in order to see the film most effectively. One could argue that a projection, dual or not, is three-dimensional based on the given space between the viewer and the wall. But what enhances this sculptural component is that the film, quite literally, leads us into a corner. The projections engage the interior space so that the walls simultaneously hug, entrap, and confront the viewer. These notions of spatial interaction are especially pertinent given that the subject matter delves into a painful, cathartic, and still today difficult history. Untitled (Structures) is filled with stagings and discoveries, actors and time capsules. It is a reserved work that is deeply and confoundingly emotive. While some of the juxtapositions of people and places run amiss, Leslie Hewitt and Bradford Young's collaboration is wholly engaging both as a filmic entity and sculpture.